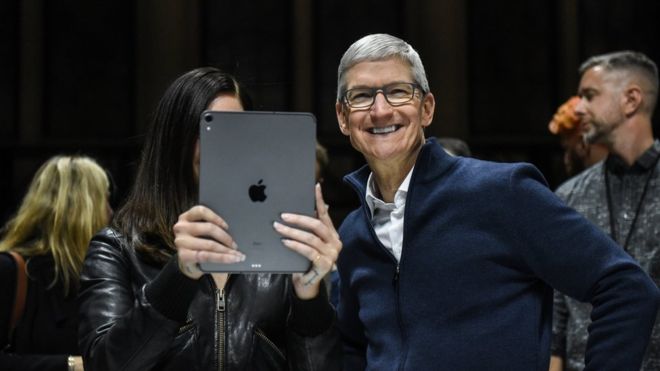 Apple falls below $ 1 tn despite revenue and profit rise

Apple briefly lost its $ 1 tn valuation on Thursday when its shares fell 7% in after-hours trading despite posting record results.

The tech giant’s strategy of charging more for its phones has paid off, with revenues jumping in the last three months despite relatively flat sales.

But a warning of possible weaker sales in coming months sparked a share price slide after official trading ended.

The sell-off accelerated after Apple said it would stop disclosing the number of units sold.

Apple executives defended their decision, arguing that the figures are no longer good indicators of the firm’s financial health.

Analysts, however, warned that outsiders may view it as a move that masks less sunny performance.

The total number of smartphones sold by all makers globally declined for the first time in 2017.

But Apple’s strategy of charging higher prices for its phones has helped it to shrug off flagging demand.

The firm sold 46.9 million iPhones in the quarter to end-September, a modest rise on the 46.7 million sold for the same period last year.

The California-based company is also making more money from “services” such as the App store, Apple Music and Apple Pay. Services revenue hit a record $ 10 bn in the quarter.

“I can reassure that it is our objective to grow unit sales for every product category that we have,” Apple’s chief financial officer Luca Maestri told financial analysts.

“A unit of sale is less relevant today than it was in the past.”

Despite the record figures, shares in the firm sunk in after-hours trading, falling by 4% and then by more than 7%, before starting to rebound.

The decline was blamed in part on a disappointing forecast for the important Christmas season.

Chief executive Tim Cook said that Apple is “seeing some macroeconomic weakness in some of the emerging markets” such as Turkey, India, Brazil and Russia.

He said some of that is due to currency fluctuation.

The firm, which relies on China for manufacturing, is at risk as trade tensions between US and China rise, though its products have so far been spared from tariffs.

Mr Cook said he remains optimistic that the two countries will resolve their issues.

So far, Apple’s business has not been affected he added, pointing to a 16% revenue rise in the most recent quarter.

Apple’s App store has felt the impact of a “moratorium” on Chinese approvals for new games, but that is a domestic issue, he added. (BBC)

China plants its flag on moon as lunar probe heads back

December 5, 2020 byLahiru Pothmulla No Comments
China has become the second country in history to put its flag on the moon, more than 50 years after the US first planted the its flag, the Guardian reported.