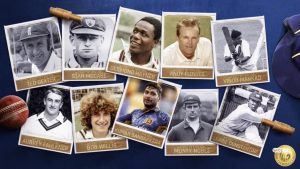 The International Cricket Council (ICC) yesterday (13) announced “a special-edition intake” of 10 cricket icons into the ICC Hall of Fame to celebrate the prestigious history of Test cricket, and to coincide with the first ever ICC World Test Championship (WTC) Final, starting on Friday (18). “The 10 legends of the game to be inducted have all made a significant contribution to the history of Test cricket, and join an illustrious list of ICC Hall of Famers, taking the total number to 103 as a result of this intake,” ICC said in a release.

The International cricket Council (ICC) added 10 new members to its Hall of Fame yesterday (13). Among them was Kumar Sangakkara, the second Sri Lankan to be inducted into the prestigious list. Muttiah Muralitharan, who was considered “an outright chucker” early in his career by many establishments until his stubborn rise to the top, was the first and only Lankan to be added to the list before Sangakkara.

For long-standing cricket followers of this island, this “ICC Fame Hall” may look one that hails only the subordinates while overlooking their erstwhile gurus; one that recognises only the followers while ignoring the pioneers and the trailblazers.

In fact, Muralitharan and Sangakkara could not have played the game with such mammoth success if not for the efforts of Duleep Mendis, Arjuna Ranatunga, Aravinda de Silva, Sanath Jayasuriya, and Chaminda Vaas, let alone the other former local greats of the game here, who toiled hard selflessly to raise the standards of Sri Lankan cricket.

Out of all of over 100 Hall of Famers, Ranatunga would perhaps be the only World Cup winning Captain of his era to be discarded from the list.

The process of naming the revered list began in 2009 when the ICC named an initial batch of 60 legends which included Clive Lloyd, Imran Khan, Wasim Akram, Javed Miandad, Sunil Gavaskar, Allan Border, Steve Waugh, and Graham Gooch et al. There was not a single Sri Lankan in the list then.

Since 2009, the ICC added more and more members to the list every year, but for 2017. The Indian World Cup winning Captain Kapil Dev was named in the list in 2010.

The contemporaries of  Mendis, Ranatunga, De Silva, and Jayasuriya such as Waqar Yunis, Adam Gilchrist (inducted in 2013), Martin Crowe (2015), Rahul Dravid, Ricky Ponting (2018), Sachin Tendulkar, Allan Donald (2019), Zaheer Abbas, and Jacques Kallis (in 2020) have already been added to the list over the last decade.

Muralitharan was named in the ICC Hall of Fame in 2016, along with Arthur Morris, George Lohmann, and Karen Rolton.

For their individual record and accomplishments, their contribution to the team and the country, and their epoch-making role in the sport, players like Arjuna, Aravinda, and Sanatha are second to none.

No “Modern Era” if not for them

That they defined a new brand of cricket in the 1990s is an undisputed fact. If not for them, the so-called “Modern Era” of cricket (1996-2015) which the ICC itself has identified very clearly, would never have been heralded the way it eventually did.

It is absolutely unclear as to how the ICC took the year 1996 as a landmark without Sri Lanka’s role in making that year so special. Whether we like it or not, there wouldn’t have been any “1996” if not for Arjuna Ranatunga – that macho, unrefined, South Asian trouble-maker!

Perhaps the only possibility for not including either Arjuna or Sanath in this list could be their innate anti-establishment nature. There is no other tangible reason as to why they have been omitted even after a decade of more and more additions to the list, even until it surpassed 100 Hall of Famers!

Ambiguities in possible on-field criteria only lead to speculation. They cast a shadow on the process. Yet Arjuna or Sanath may not much care about such glorious accolades because their job had been done; mission accomplished.

Some of the other regional inductees such as Kapil Dev and Javed Miandad carry similar characteristics. But their countries overall, both India and Pakistan, are in many ways more powerful than Sri Lanka, not merely in the playing field, but outside of it.

The Lankans have never had much of a say in ICC’s political affairs. In contrast, though, India has risen to the top of the game’s international governance, particularly during the last decade. Sri Lanka’s Thilanga Sumathipala or Jayantha Dharmadasa couldn’t go the distance India’s Jagmohan Dalmiya, Sharad Pawar, or Shashank Manohar could go in ICC’s higher echelons.

From a Sri Lankan perspective, snubbing Duleep, Arjuna, Aravinda, Sanath, and Vass while hailing only Muralitharan and Sangakkara (with all due credit to their induction) could only make “ICC’s Hall of Fame” a ragged one, one that is graced only by a certain class, certain type, and a certain school of thought which is absolutely not universal – a prime requisite of an international governing body.

Is IPL a tournament or a drama?