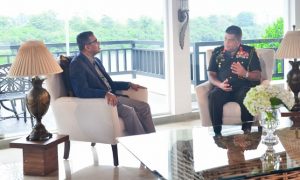 Army Commander Lieutenant General Shavendra Silva says his troops are kept ready for any emergency in the future.

Silva expressed these views during an interview with Nitin A. Gokhale, Editor-in-Chief of BharatShakti.in and SNI last Saturday.

He said the Army was placed on stand by to face any unconventional threats and future challenges.

The Army Chief also says he will ensure the highest degree of discipline among all ranks in the organization and would not hesitate to take any disciplinary action against wrongdoers under any circumstances.

According to Silva, the Army has worked tirelessly for the benefit of affected masses since the conclusion of the humanitarian operation in 2009.

He said this process would be continued, sustained and supported by the armed forces as per the vision of the new President.

September 17, 2020 bythemorningeditor1 liberty No Comments
A five-member committee has been appointed to look into the activities of the Sri Lanka Medical Council (SLMC), stated the Ministry of Health.