January 29, 2021 by Lahiru Pothmulla No Comments 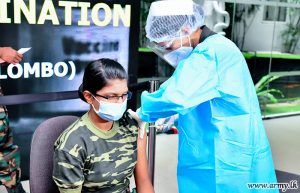 A total of 1,000 Army personnel serving at the frontline in the fight against COVID-19 had been inoculated today and 7,500 more to be inoculated at Military Hospitals across the country tomorrow, the Army said.

On Saturday, a total of 7500 more vaccines are scheduled to be jabbed at Military Hospitals in Anuradhapura, Minneriya, Trincomalee, Mannar, Vavuniya, Palaly, Kilinochchi, Mullaittivu, Diyatalawa and Ampara while separate mobile medical units are expected to provide the vaccine to Army personnel serving the 12 Division and the 61 Division in Hambantota and Boossa areas. 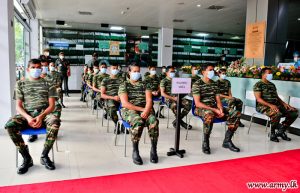 As per the planned 1st round of vaccination, Army medical teams expect to complete the allocation of 31,000 jabs to Army personnel within the next 4 days from today.

After the first dose was inoculated to Colonel Saveen Semage, Deputy Director, Directorate of Army Preventive Medicine and Mental Health Services, two more frontline Army personnel (Officer and Other Rank) representing the line of command in the organization received their doses.

September 24, 2019 byTSM Web Desk No Comments
The Appeal Court today issued an interim injunction preventing the summoning of Gotabaya Rajapakse on the 27 Sep by the Jaffna Magistrate's Court over Lalith Kugan abduction case.

‘Wele Suda’ ordered not to be taken out of imprisonment

May 17, 2021 byMihi Perera No Comments
Gampola Vidanalage Samantha Kumara alias Wele Suda, who is being held at the Boossa Prison, has been ordered not to be taken out of the prison by the Court of Appeal.