A VVIP was last week faced with an unexpected predicament that left him seeking renewed divine intervention.
The incident involved a chakra that activates divine energies, which the respective VVIP always holds in his hand. However, this chakra had fallen from his hand while attending an official function at the parliamentary complex last week. Seeing the object fall from his hand, a female legislator representing the Opposition had immediately picked it up from the floor and handed it back to the VVIP. The respective VVIP had thanked the female MP and taken the object with a half-hearted smile. The MP had wondered about the reason behind the VVIP’s half-hearted smile, only to be later informed that the chakra would now have to undergo a renewed set of prayers since it was touched by a female, considered to be unclean according to divine mythology. 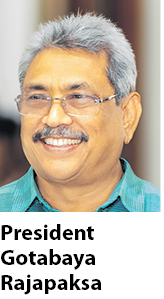 President Gotabaya Rajapaksa says that efforts by certain individuals to create issues within the family will be futile.
The President made this observation during a meeting on Friday (12) with the Sri Lanka Podujana Peramuna (SLPP) Provincial Councillor’s Forum. “The Government will only be successful if we work as one unit. Everyone knows that Mahinda Rajapaksa is a great leader in the whole of Asia, not only our country. No one can be compared with his versatile political knowledge. I feel it is a great relief that such a leader is supporting me to govern the country. I feel that Mahinda Rajapaksa was the main reason for our victory. Also, it has to be accepted without doubt that Basil Rajapaksa created the environment to form a government. It is very easy to take forward a country that has two such leaders. Both these leaderships are required to carry forward the Government. Mahinda Rajapaksa is so politically mature that he has never put pressure on me when making appointments. I know that he has told several people to allow Gotabaya to carry out the work. Basil Rajapaksa has also not put pressure on any appointment or anything else. He has a lot of people supporting him after being in politics for close to 60 years. I know there are huge crowds at Wijerama. I also understand the difficulties faced by him. However, I will say without any fear that we will govern the country without any issues,” President Rajapaksa had said.

United National Party (UNP) Leader Ranil Wickremesinghe and former Speaker Karu Jayasuriya met recently.
The meeting was at the wedding ceremony of former Minister Suranimala Rajapaksa's son, Kanishka. Both Wickremesinghe and Jayasuriya attended the wedding to sign as witnesses. After carrying out their duties, the two leaders were seen engaged in a long conversation. Details of the matters discussed were not immediately known. Jayasuriya, after distancing himself from the UNP, is currently involved with the People's Movement for a Just Society.

A son of a prominent VVIP is tipped to contest as a chief ministerial candidate of the governing Sri Lanka Podujana Peramuna (SLPP) at the impending provincial council (PC) elections. It is learnt that an initial discussion on the matter has been held among several senior members of the SLPP. A final decision on the matter is yet to be reached on the matter. If the decision is finalised, the son is expected to contest from his father's constituency. Both the SLPP as well as governing party ally, the Sri Lanka Freedom Party (SLFP), are in the process of preparing for PC polls. President Gotabaya Rajapaksa last week called on officials to make the necessary preparatory work to hold the PC polls and also called on the SLPP Provincial Councillors Forum to prepare for the impending polls. SLFP General Secretary State Minister Dayasiri Jayasekara last week announced that the party will be calling for applications for nominations from party members for the PC polls.

Push to kick out Wimal

A group of backbench members of Parliament representing the governing Sri Lanka Podujana Peramuna (SLPP) last week met with Prime Minister Mahinda Rajapaksa seeking stern action against those who seem to be working against the Government. The backbench MPs’ main target was National Freedom Front (NFF) Leader Minister Wimal Weerawansa. The group, consisting 46 backbench SLPP MPs closely affiliated to SLPP National Organiser Basil Rajapaksa, met with the Prime Minister on Wednesday (10) at Temple Trees. MP Pramitha Bandara Tennakoon had pointed out to the Prime Minister that Weerawansa’s statements and actions were detrimental to the Government. He had further noted that Weerawansa’s actions have even aided the currently displaced Opposition. Prof. Ranjith Bandara had noted that Weerawansa’s statements were a direct attack on Basil.

Media Minister Keheliya Rambukwella had on Thursday (11) instructed the Chairman and the Board of Directors of the Sri Lanka Broadcasting Corporation (SLBC) to resign with immediate effect.
The Minister had called on the SLBC Chairman Jagath Wickramasinghe, Directors Nipuna Wahalathanthri and Gamini Wijesekera, as well as representatives of the Ministry of Finance and Mass Media, to submit their resignations. According to Media Ministry sources, the Minister had decided to crack the whip after learning about a decision by the Board of Directors to hand over a broadcasting station in Uda Radella, Nuwara Eliya, to a businessman without obtaining the necessary approvals. The respective businessman had reportedly commenced construction on the site. It has also been revealed that the Chairman and the Board of Directors had transferred a frequency owned by the SLBC to a private entity without approval. A group of SLBC employees had lodged a complaint with the Inspector General of Police (IGP) regarding the matter. The SLBC employees had also accused the Chairman of removing two antique pianos from the SLBC premises. The letter was also sent to the Media Minister and copied to the President, Prime Minister, and other key members of the State. 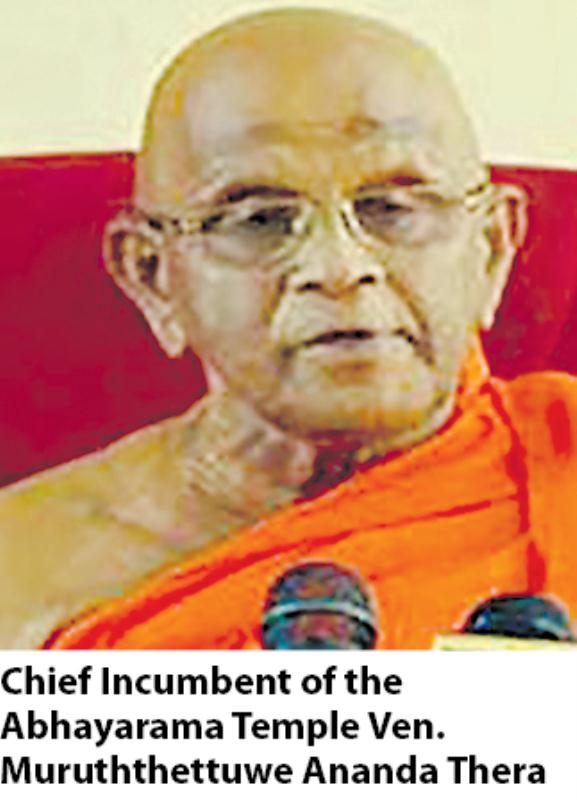 Prime Minister Mahinda Rajapaksa last week made an impromptu visit to the Abhayarama Temple in Narahenpita, which played a key role in his political work during his time in the Opposition from 2015-2019.
Since of late, the Chief Incumbent of the Abhayarama Temple Ven. Muruththettuwe Ananda Thera has been at loggerheads with the Government, making critical comments over some of its actions. The Thera last week claimed that public displeasure over the Government was increasing, and that it was becoming difficult to find a person who was not disgruntled with the present regime. He further noted that the Government would not be able to function for long under the present circumstances. Ven. Ananda Thera then told the media that a Bodhi pooja, along with other religious activities, has been organised to invoke blessings on the Government, since it now seems the Government has earned the wrath of divine powers. The Prime Minister last month visited the temple during Ven. Ananda Thera’s birthday celebrations to mend the soured relations. Last Thursday (11), Prime Minister Rajapaksa visited the Abhayarama Temple as part of an inspection tour to observe the administering of the Covid-19 vaccine to the public. The Abhayarama Temple was also used as a centre to administer the vaccine. Upon a chat with the Thera, the Prime Minister left the temple after visiting the hall where the vaccines were being administered.

Just as Prime Minister Mahinda Rajapaksa was making his way out of the Abhayarama Temple in Narahenpita, former United National Party (UNP) Minister Ravi Karunanayake arrived at the temple.
After exchanging pleasantries, Karunanayake made his way to pay respects to Ven. Muruththettuwe Ananda Thera. Karunanayake then spent a few minutes speaking to the Thera, where he praised the “silent service” rendered by the Thera to society. Afterwards, Karunanayake made his way to the hall where the Covid-19 vaccine was being administered to get inoculated. 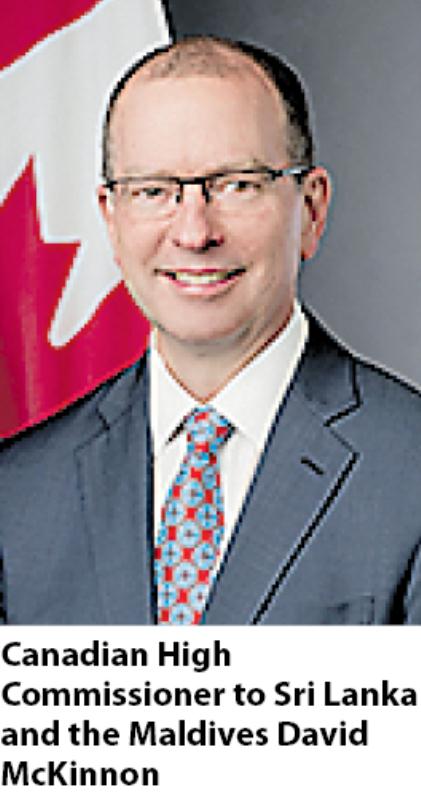 Social media was abuzz last week following a question posed by Canadian High Commissioner to Sri Lanka and the Maldives David McKinnon on whether he was under surveillance. McKinnon made the query via a message on Twitter last week.
The envoy had raised the question after information of a private meeting he had held with the High Commissioner of Bangladesh at his private residence was revealed in some media publications. The media had also recently revealed details on a private meeting held between the British High Commissioner to Sri Lanka Sarah Hulton, and the Ambassador to South Korea. However, responding to McKinnon’s question, Police Spokesman Deputy Inspector General of Police (DIG) Ajith Rohana denied such actions in Sri Lanka, and assured that diplomats are not under surveillance in the country. 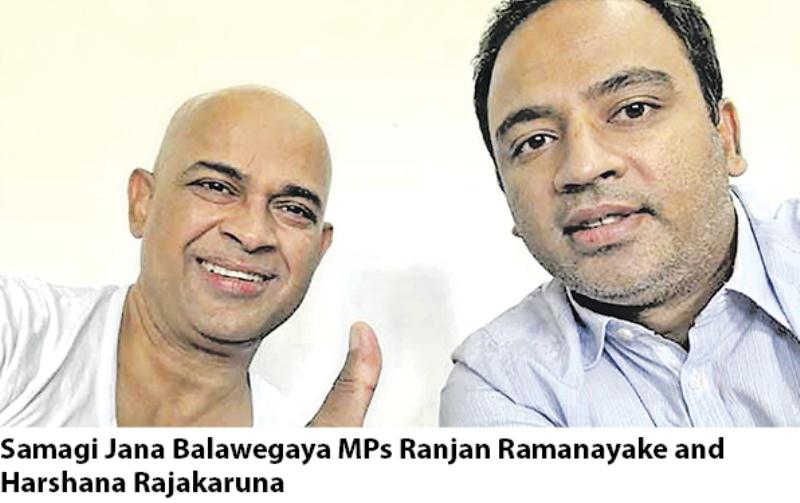 Officials of Parliament have taken steps to suspend the salary of Samagi Jana Balawegaya (SJB) MP Ranjan Ramanayake, who is currently facing a four-year jail term.
Accordingly, Ramanayake’s salary as an MP has reportedly been suspended from last month. The salary is to be suspended until the court reaches a decision on the fate of Ramanayake’s parliamentary seat. Meanwhile, Ramanayake is currently facing a two-week ban from meeting visitors after a selfie taken by SJB MP Harshana Rajakaruna was made public last week.

The Chinese Embassy in Sri Lanka on Friday (12) issued a statement condemning the “inappropriate advertising of the Sri Lanka national flag on Amazon”.
“National flags must be fully respected,” the Chinese said in the statement. The Embassy statement further noted that similar products are sold by sellers from various countries on Amazon. “The Embassy would like to emphasise that as an all-weather friend and closest partner, China has been respecting and supporting Sri Lanka for its peace, prosperity, and dignity for decades,” the statement added. Yesterday (13), it was reported that following Sri Lanka’s request from China, Amazon has taken down the doormat with the Sri Lanka national flag from its website.

United National Party (UNP) Leader Ranil Wickremesinghe last week made public his favourite pastime – watching movies on Netflix.
When questioned during an electronic media interview whether he was busy at night making plans to regain power at the 2024 elections, Wickremesinghe smiled and replied that he watches movies on Netflix at night. However, he noted that he was planning on setting up a new political movement in the future. He added that the Government’s popularity was waning, with those who voted to bring it to power now criticising its actions.
Loading...