Going by current global statistics on Covid-19, China is likely to be the largest and most stable tourism-generating market for some time, as western markets such as Europe and the US are staggering due to the pandemic. So it may make a lot of sense to have China as the main target market, instead of scattering your marketing efforts across the world, for the following reasons.
•China is the least affected by Covid among the world’s major tourism markets
•Almost every other major tourism market including the US, the UK, France, Germany, Italy, and Russia have been devastated •Chinese took 149.72 million overseas visits in 2018 (China Daily) •The Chinese travel market with its population of nearly 1.5 billion is largely untapped, although growing fast. Currently, 120 million Chinese citizens hold passports – about 10% of the population – compared to 40% of Americans and 95% of Brits •52% of Chinese tourists booked through online travel agencies (OTA) •Japan received 8.13 million Chinese visitors in the first 10 months of 2019, up 13.5% year-on-year (Japan National Tourism Organisation) •Chinese have gained a reputation as high-spending tourists worldwide •Chinese ecommerce spend by travel (including accommodation) $ 228.5 billion 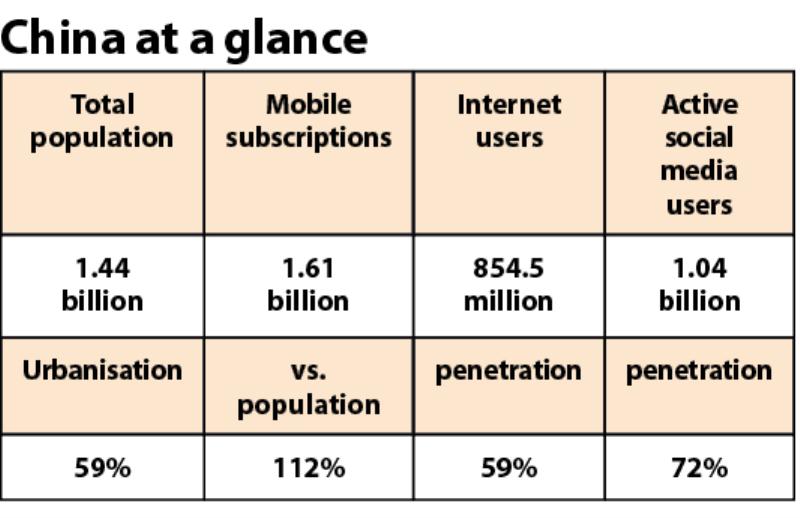 The following factors make digital marketing ideal for marketers to make an impact on the Chinese market: •72% use social media •59% are active on the internet •Mobile penetration is 112%, or 1.12 for each person in the population   Digitally marketing Sri Lanka in China Marketers must understand that western social media sites that are most used worldwide for marketing purposes, such as Facebook, YouTube, and Twitter, are prohibited in China. However, a range of additional channels are available for businesses to use in China for digital marketing. China’s social media has enormous reach, given the size of the population and their general familiarity with technology. People in China spend a significant amount of their daily lives social networking, especially on WeChat. The number of active WeChat accounts have steadily increased and about 1.2 billion active monthly users from different ages were identified in WeChat in the first quarter of 2020. It’s not just WeChat, however; that’s now one of China’s most competitive marketing channels. 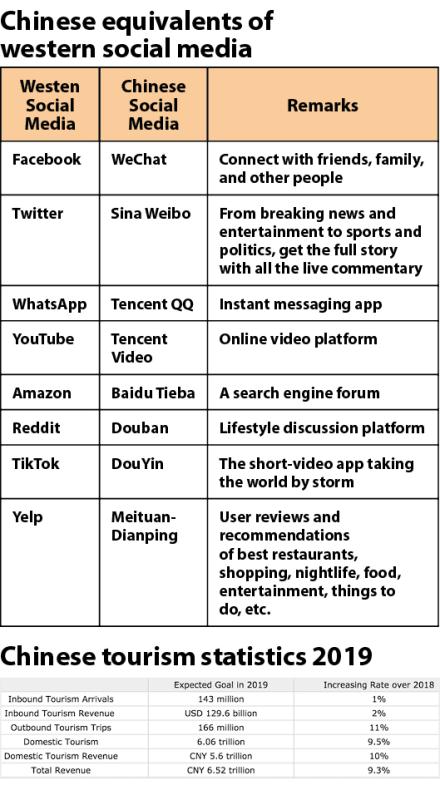 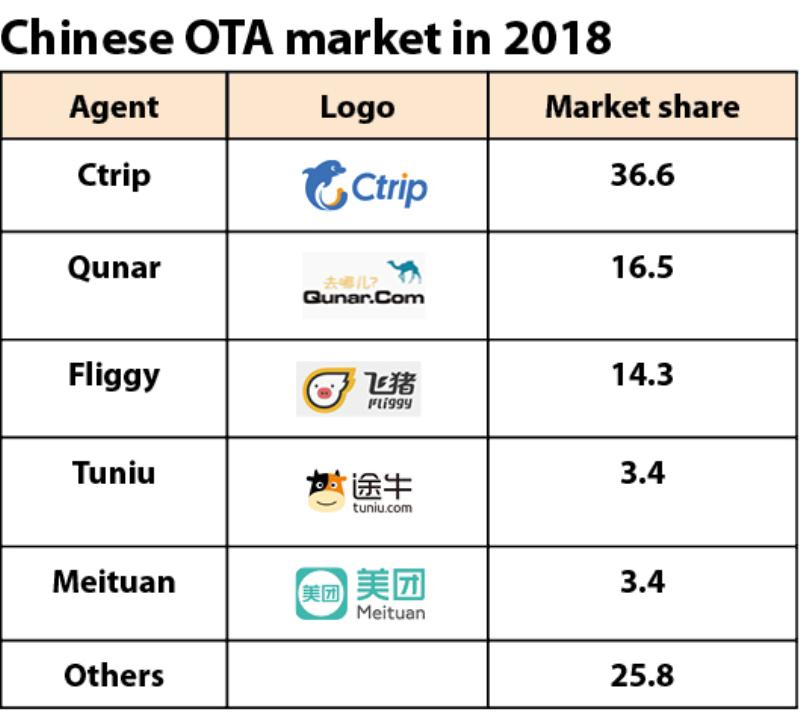 Top 10 destinations during Chinese New Year Thailand, Japan, Hong Kong, Vietnam, Singapore, Cambodia, Malaysia, the Philippines, the US, and Indonesia are the 10 most popular countries for the Chinese New Year. 65% of visitors prefer short trips to Japan and Southeast Asia because of their small holidays. Trip.com, or Ctrip as it was originally known, is one of the largest OTAs in the world. Listing 1.2 million hotels in 200 countries, it has 400 million members, with its flight booking routes connecting over 5,000 cities. It had over 45,000 employees and a turnover of $ 5.12 billion in 2019. Ctrip has also branded its mobile app trip.com and it has over one billion downloads. Visitors will book and follow flights on the go with the Ctrip application. The trip.com app is available in Chinese, English, and seven other languages, which is partly why it is so popular among travellers. Free independent travellers (FIT) As the latest data from the China Tourism Academy (CTA) and Ctrip show, 31% of China’s outbound tourism population were young and well educated, mostly in the 27-37 age bracket. 77% of China’s FITs hold undergraduate or university degrees. As young people, they are also very technologically savvy, particularly this FIT group who prefers to book trips using mobile phones. [caption id="attachment_88251" align="alignleft" width="300"]

31% of China’s outbound tourism population were young and well educated, mostly in the 27-37 age bracket[/caption] As they have strong digital literacy skills, mobile phones are a big planning tool before, during, and after their travel. This was also the main reason why they were more likely to change their routes while travelling. According to the CTA, 43% of the Chinese FITs are most likely to plan to travel for two weeks and 26% most likely to do so for one month because of their spontaneous decision-making. Chinese FIT outbound travel grew by 18.8% during 2019’s Chinese New Year holiday, compared to the equivalent holiday period in 2018. Mobile payment has been a regular practice in China for the past few years. According to a survey, the most common payment form used by 92% of Chinese city residents in 2018 was WeChat Pay and Alipay. In rural areas, the same phenomenon occurs: 47% of rural inhabitants in China use mobile payments regularly. The People’s Bank of China (PBOC) released statistics early in 2020, which indicates a 6.3% rise over the same period in 2018 in the amount of electronic payments processed by country’s banks. 62.1 billion electronic payments, including 30.7 billion mobile transactions, have been reported, reflecting a 73.6% annual increase. Around 83% of all payments were made via mobile payment. Lessons from Japan’s popularity among Chinese tourists [caption id="attachment_88250" align="alignright" width="300"]

Chinese tourists taking pictures of Japan's most famous landmark, Mount Fuji[/caption] For Chinese tourists, Japan is the most attractive location all year round. It has been the favoured destination for Chinese family trips for comfort and health reasons. One-third of those who applied for a Japanese visa through Ctrip were travelling with their families. Ctrip analysed the tour products booked by Chinese travellers and ranked the various activities they have to do. The first and second places went to checking cherry flowers and maple leaves, then enjoying the thermal springs and ski pistes. Increasing momentum is seen in trying out kimonos and sushi sampling. Tourists would prefer to explore local culture and flavours and do not like sightseeing or shopping. The visa application for Chinese tourists in Japan has been simplified further since January 2019. The second reason is transport convenience. In winter 2019, there were 1,406 daily flights between Japan and China in the winter and a 224 rise over the summer, according to estimates by the Japanese Ministry of Land, Infrastructure, Transportation, and Tourism. Chinese routes comprise 27% of Japan’s international flight routes. Chinese cities of the second and third tier, including Nanjing, Xi’an, Hefei, Ningbo, Haikou, Daliano, and Chongqing, have been opened to new routes from Tokyo, Osaka, Nagoya, and elsewhere. Helpful hints
•Chinese tourists tend to book trips about three months in advance
•Bookings are made mainly by women
•Chinese tourists prefer destinations with direct flights from their city in China
•Localise content of your campaigns into Mandarin or the language of the region you are targeting, including your website
•Enlist Chinese OTAs to promote your business
•Ensure your presence on Chinese search engines
•Participate in online Chinese travel discussion forums
•China has different holidays to the West. Target Chinese National Day holiday “Golden Week” in October 2020 and Chinese New Year in February 2021
•CRM – reach out to the hundreds of thousands of Chinese who have already visited and ask them to recommend the island to friends and relatives
•Chinese tourists seek destinations for rest and relaxation; nature, culture, and history; and shopping
•They also require safe and politically stable destinations with low population, nature features, and landscapes
•FIT travellers prefer shorter distances, four to six nights, and customised itineraries
•They also have a preference for Chinese-speaking guides and other persons to interact with
Conclusion The continuous and rapid growth of the Chinese OTA industry increases demand, allowing companies and countries to take advantage of this huge market. This especially applies to Asian countries, the leading region for most tourists in China. Clearly, enterprises that want to tap into this wide audience will benefit from a strong online presence. A well-conceived, Chinese-friendly online marketing campaign would therefore be crucial. Ctrip continues to dominate the OTA market while new entrants and existing competitors are certain to offer a fluid tourism industry the right opportunities. Chinese tourists are very advanced with regard to technology and prefer electronic transactions as much as possible. Thus, it is vital that Sri Lanka’s tourism marketers upgrade the various aspects of their products to seamless and paperless operations. These would include payment gateways, booking engines for all aspects including air tickets/hotel bookings/attractions, mobile applications and QR codes, and ewallet. Dr. Nicholas Ruwan Dias is a Digital Architect at Aegon Asia based in Kuala Lumpur. He holds a BSC in Computing from the University of Greenwich, a Master’s in Computer Software Engineering from Staffordshire University, and a PhD from the University of Malaya. He is completing a second doctorate (DBA) from Universiti Utara Malaysia. Niresh Eliatamby, MBA, LLM, is a specialist in destination marketing and lectures travel trade management and hospitality management in Sri Lanka for London Metropolitan University. He was a consultant for SriLankan Airlines, Editor of a travel magazine, and authored several books related to Sri Lanka’s tourism industry.