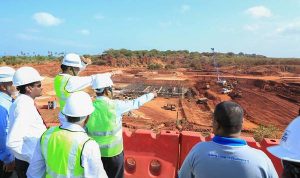 Minister of Megapolis and Western Development Patali Champika Ranawaka said that President Maithripala Sirisena, Prime Minister Ranil Wickremesinghe, and Leader of the Opposition Mahinda Rajapaksa should take a political decision over the operations of the western region’s Solid Waste Management Project which is located in Aruwakkalu.

Ranawaka said that only the site preparation and construction of the disposal units were tasked to his ministry, with his team seeing it through to completion recently.

“The Government requested the Ministry of Megapolis and Western Development to construct solid and sanitary waste disposal units in Aruwakkalu, and site preparation commenced after obtaining clearance from the Central Environment Authority (CEA). We have done our part but now, the President, the Prime Minister, and the Opposition Leader should decide whether the Solid Waste Management Project will move forward, hereon.”

Ranawaka confirmed that two environment impact assessments (EIAs) were carried out before commencing the project and if the project had any negative impact on the environment and Aruwakkalu, the assessments would have indicated the same. Furthermore, the CEA authorised the plan indicating that the project was within their guidelines, he attested.

“Our ministry is not tasked to sort and move garbage from the current holding units in Kerawalapitiya. It is in the hands of the municipal councils and provincial councils for which the relevant authorities should provide instructions,” Ranawaka retorted.


The Sunday Morning contacted Solid Waste Management Project Social Specialist Nimal Premathilaka to comment on the present situation, to which he replied: “We constructed the units as instructed, but it is not within our parameters to dictate the transportation and disposal of waste. Our work is done. Now it’s the responsibility of the local governments, provincial councils, and the CEA to overlook and ensure the project continues according to the plan.”

Premathilaka also noted that garbage needs to be collected, segregated, and efficiently disposed of by the respective authorities and that the Ministry of Megapolis and Western Development was only tasked to see through to the preparation of the Aruwakkalu solid waste management site. With the first shell already completed, Premathilaka confirmed that it could hold up to six tonnes of garbage.

Lately, the residents of the Puttalam District have launched several protests to urge the Government to stop transferring Colombo’s garbage to their backyard. They claim that it is polluting the lagoon which is directly impacting their fishing trade and as a result, the people too will contract various diseases.

January 9, 2022 byNews Admin No Comments
The Ceylon Electricity Board (CEB) has to make the payment for its next furnace oil shipment order to be placed on Wednesday (12) in US Dollars, The Sunday Morning learns.