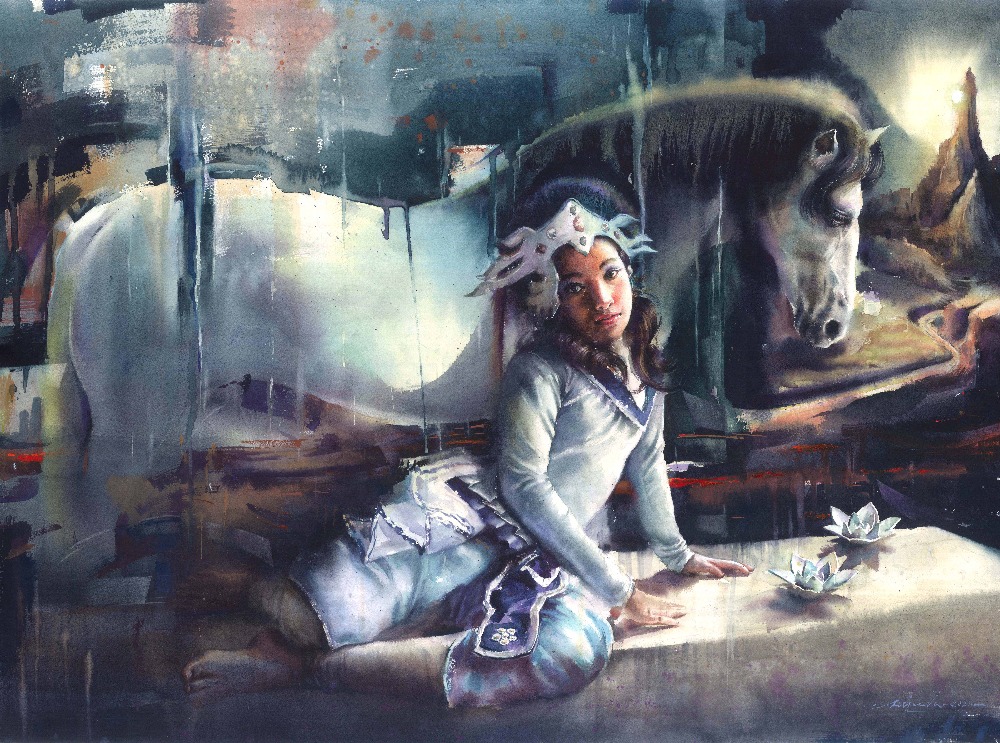 Asanka Anujeewa on the dynamic world of watercolours

April 26, 2021 by Dimithri Wijesinghe No Comments 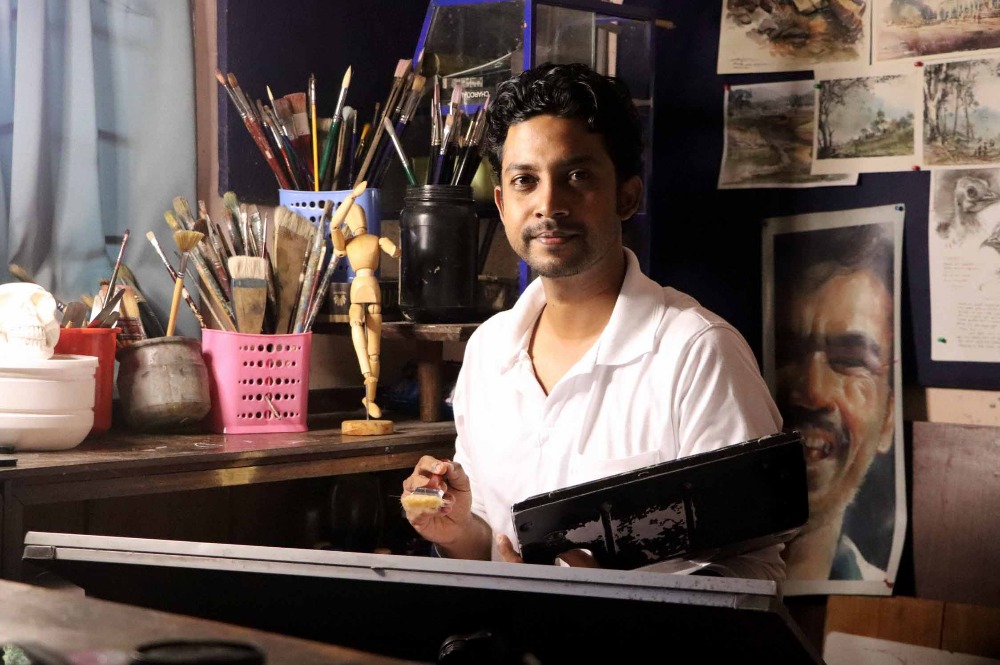 “I was taking part in the Kala Pola and by chance my stall was placed right next to Sanjeewa Seneviratne’s stall, which resulted in my own stall getting a lot of foot traffic due to his popularity”  Asanka Anujeewa

Asanka Anujeewa is a Lankan watercolour painter whose painting titled “Departure” is among the 100 works selected for the “2nd Universal Watercolour Exposition 2020” in China. A world-class, high-end watercolour contest hosted by the International Masters of Watercolour Alliance (IMWA), it is for the first time in history that a Lankan artist has been featured amongst the world’s best 100.

Speaking with the artist himself, he shared that it has been an absolute career highlight, stating that for artists in Sri Lanka, it is not a possibility to sustain a professional career as a full-time artist. He said he hopes that accolades such as this would show Lankan society that it is in fact worthwhile to pursue art and that it is worth investing in.

Anujeewa is a teacher by profession. He shared that he teaches art at Dharmawijaya Vidyalaya, Monaragala, adding that while it gives him great joy to educate young minds, for him, it is a means to an end, allowing him to provide for his art – to be able to continue to paint.

A First Class graduate of the University of Visual and Performing Arts, Anujeewa stated that as a young child growing up in Monaragala, he had very limited exposure to the different mediums of art. He said watercolours was a medium they were not allowed to access until much later in their school life. He recalled a story back when he was in school where one of the senior art students was too lazy to clean their palette; Anujeewa had been asked to do it and he had used the remaining paint on it to paint. And that was his oldest memory of interacting with watercolours.

At present, widely accepted as an excellent watercolour painter with a unique personality in the watercolour community, Anujeewa commented that watercolours as a medium has always intrigued him and that it is a far more dynamic medium than most, as it has a unique way of interacting with water. He said it takes time and practice to master the ways to handle such a medium.

He has published a book of watercolour techniques, Diyasayam Madhya Bhavithaya, which was awarded first place in the Uva Province at the State Literary Awards. 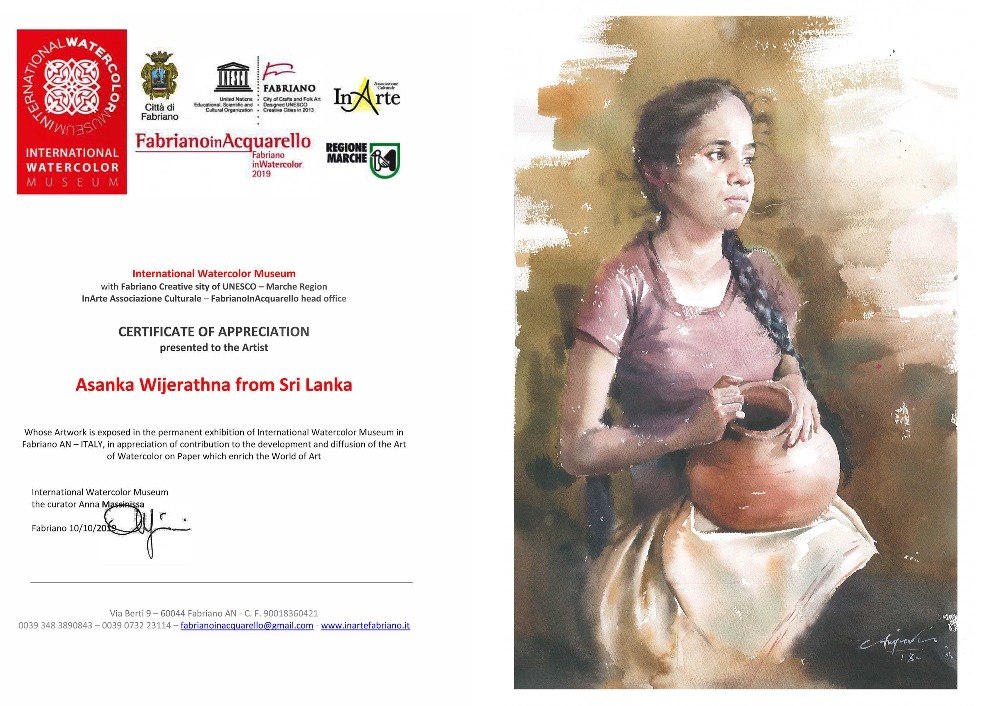 Anujeewa shared that he has had some fortunate circumstances in his life, a series of incredible events which has allowed him to reach the heights he is at today. He recounted a story of how he first met Sanjeewa Seneviratne – one of Sri Lanka’s leading professionals when it comes to watercolour painting – and stated that this chance meeting was what marked the beginning of his professional career as a watercolour artist.

“I was taking part in the Kala Pola and by chance my stall was placed right next to Sanjeewa Seneviratne’s stall, which resulted in my own stall getting a lot of foot traffic due to his popularity,” he said, adding that Seneviratne came over and took a look at his paintings and gave him some incredible advice, which he cherishes to this day.

He said that after this chance meeting, he was able to initiate himself into the community of professional watercolour painters, where he met numerous unique and talented voices like Gunasiri Kolambage. He also shared that he worked in the editorial of the local art magazine Chithrakalawa, where he met Sampath Karunakalage, commenting that all these personalities have helped mould who he is today.

In his career, Anujeewa shared that he has had many notable achievements which he is most proud of. However, one triumph that stands out is one of his paintings titled “Potful Dreams” being included in the Permanent Exhibition at the International Watercolour Museum in Fabriano, Italy. He said that this too was a first for Sri Lanka and it is an incredibly prestigious honour. That same painting was published in the International Watercolour Society magazine (IWS), which is an annual magazine that recognises a total of 10 works every year from all over the world.

With his painting receiving international and national attention, Anujeewa shared that he sees himself as a modernist painter who chases the new ways of the field, and hopes that he can add to the new exploration of contemporary watercolour in the island.

‘Travelling has now become part of our journey’

November 26, 2021 byNews Admin No Comments
Gihani Bulathsinhala and Don Harshana Bulathsinhala, better known as the @foodiesyblings are teachers at their own language institution by profession. As siblings, ever since they were children, tryin

September 19, 2021 byNews Admin No Comments
Sri Lankan animal rights activists and elephant experts were saddened by the recent magistrate order permitting the release of 13 elephants alleged to have been illegally stolen from the wild, back to