The Sri Lanka top-order virtually picks itself. The 1996 player of the tournament Sanath Jayasuriya? Yes please. Tillakaratne Dilshan, who hit six fours in an over off Mitchell Johnson in the 2015 event, and averages over 52 in World Cups? You’d be mad not to pick him.

Kumar Sangakkara (four consecutive hundreds in a World Cup), Aravinda de Silva (who produced one of the most incredible counterattacks in one-day history – his 66 in the 1996 semi-final) and Mahela Jayawardene (who has hit centuries in a semi-final and a final) are all almost automatic choices. Arjuna Ranatunga, whose World Cup average is substantially better than his overall record, was an easy choice as well.

In fact, the only position that requires a little pondering is that of the third front-line seamer (Sri Lanka have second, third and fourth spinners in Jayasuriya, Dilshan and de Silva, so no need for a second specialist slow bowler). Chaminda Vaas and Lasith Malinga share the new ball, but who comes in after them? Nuwan Kulasekara springs to mind as one option, but his average in World Cups is touching 40. Vaas’ old partner in crime Pramodya Wickramasinghe could be another choice, but his World Cup record is little better than Kulasekara’s. It seems a slightly left-field choice, but eventually, Ashantha De Mel emerged as the best option, owing to a World Cup average of 24.94 (18 wickets) across the 1983 and 1987 events. He is the only player of pre-1996 vintage in this XI. 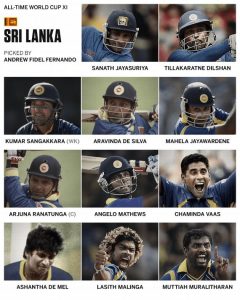 August 20, 2021 byRevatha No Comments
Football snippets from the week

10 points to save Sri Lanka’s cricket

January 31, 2021 byNews Admin No Comments
A few suggestions to rebuild SL’s cricket for the future that stemmed from various discussions over the past week...