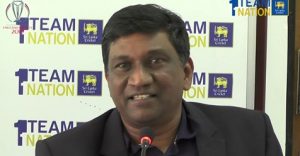 Ashantha de Mel denied taking full responsibility of the team’s debacle as the chief of selectors, citing the reasons for the losses were many

There was severe criticism from many quarters on Sri Lanka cricket administration as well as the National Selection Committee after Sri Lanka lost their second back-to-back Test series this week.

They lost to England in Galle 2-0 after losing to South Africa away from home early this month, also 2-0.

Either Pramodaya Wickramasinghe or Kapila Wijegunawardene is tipped to be appointed in de Mel’s place, it was learnt Wednesday night.

Meanwhile following a discussion with Sri Lanka Cricket (SLC) on Wednesday Minister Rajapaksa announced there will be a totally new selection committee to be appointed.

The present National Cricket Selection Committee, which was appointed on 4 December 2020 by Minister Rajapaksa, include the following seven members who are undertaking men’s, women’s, and junior national selections are:

January 31, 2019 byRevatha No Comments
An innings win in the day/night Test in Brisbane gave Australia their first Test win of 2019

September 25, 2018 byRevatha No Comments
The ODI squad for the forthcoming series against England has not yet been released, but it has been named and sent to the sports ministry for approval.