Asitha Fernando in for Windies T20s 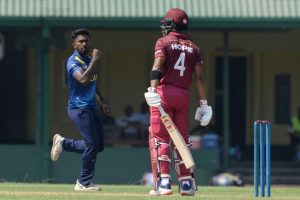 Nuwan Pradeep and Dhananjaya de Silva have both been ruled out of Sri Lanka’s two-match T20I series against West Indies after picking up injuries.

Asitha Fernando has been named as Pradeep’s replacement, while Sri Lanka Cricket have said they will not be calling up a replacement for de Silva.

During the third and final ODI against West Indies, right-arm seamer Pradeep had left the field three balls into his fifth over clutching his leg and is now set to be out for six weeks with a hamstring injury.

De Silva also left the field during the match, and although he later came back on to field the finger-spinner bowled a total of just five overs, all before leaving the field. An expected time frame for his return from the wrist injury has not been set.

Fernando made his international debut in an ODI against Zimbabwe in 2017 but has not played for Sri Lanka since. In that rain-affected fixture, the right-arm seamer opened the bowling, conceding 22 from his two overs as Zimbabwe chased the required 219 runs in 29.2 overs, leaving 10 balls to spare.

The 22-year-old does have recent experience of playing against West Indies though, having appeared for both Sri Lanka Cricket XI and Sri Lanka Board President’s XI in 50-over warm-up matches in recent weeks. In those fixtures he claimed three wickets, including that of Shai Hope for a duck as Sri Lanka Cricket XI claimed a two-wicket victory over the West Indians side.

The first T20I will be played on Wednesday 4 March in Kandy, with the second game being played at the same venue two days later.

103rd Tennis Nationals – The past champions

August 23, 2018 byRevatha No Comments
Here is the Champions Roll of the historic SL Tennis Nationals, now on at the SLTA, Colombo