At last, SLC to offer player contracts for 2021 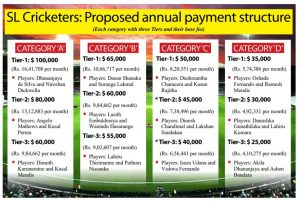 * ‘Three prodigal sons’ remain to be out

* Reassessment to be made before January 2022

“We are planning to give the contracts to the players. There will be three or four new players in the new list, who have performed well in the recent past and had not been granted contracts earlier,” a senior SLC ex-co official told the Sunday Morning Sports yesterday (14).

The Technical Advisory Committee (TAC) of SLC, headed by Aravinda de Silva, intervened in making the player contracts for this year yet players, allegedly manipulated by a couple of seniors, refrained from signing the contracts citing lack of transparency in player categorisation.

Sources added that Avishka Fernando, Chamika Karunaratne, and Asitha Fernando have been added to the new list for their good performance in the recent international series.

“Finally SLC agreeing to settle this will be great thing. The contract dispute had divided former legendary players into at least four factions, the current lot of players too in into about four factions, and the current board into two factions,” another senior official revealed with a sigh of relief.

Commenting further on the new additions into the list, one current SL official said a few senior players such as Seekkuge Prasanna and Asela Gunaratne, who are playing in the domestic circuit, will too be included into what he called “domestic contracts” for a monthly payment in rupees. “They too will be considered for future selections,” he further explained.

Meanwhile the former ex-co official added that “the suspended players (Danushka Gunathilaka, Kusal Mendis, and Niroshan Dickwella) are not included while there are some others in the current list who will be excluded as they are not considered for future plans.”

One player, Isuru Udana, who had been named in the previous list, retired from international cricket recently.

One of the TAC members Muttiah Muralitharan had said his committee planned not to offer annual contracts this year, owing to the recurring disputes through the year, and would only offer tour-by-tour contracts for the remainder of the year. Later it was reported that the TAC conceded its powers on player contracts to the Board at meeting held with the Minister of Sports.

“Some of the players who are already named for contracts will go. The new contracts will be from August till the end of December, when the new player assessments will be redone. All the issues that were here and there will be rectified from January onwards,” the SLC ex-co official further added.