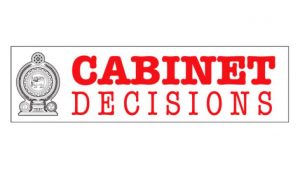 Taking into account the present pandemic situation, the Cabinet of Ministers yesterday (29) approved the provision of audio-visual communication facilities for the accused and suspects to appear before the courts.

The proposal had been tabled by the Minister of Justice Ali Sabry.

These facilities are to be provided to the accused and suspects who are already being rehabilitated under a court order for another case. It was decided to advise the legal draftsman to draft the bill accordingly.

In order to prevent future occurrence of violent incidents in taking prisoners to court, amendments to the Code of Criminal Procedure Act No. 15 of 1979 have been submitted to Parliament to empower the Magistrate to remove the need of the presence of suspects or accused before the Magistrate to extend the remand orders. However, approval could not be obtained due to the prorogation of Parliament.

June 26, 2021 byAazam Ameen No Comments
Four Grama Niladhari (GN) Divisions in the Kegalle District have been  isolated with effect from 6.00 am today (June 26), the National Operation Centre for Prevention of COVID-19 Outbreak (NOCPCO) say