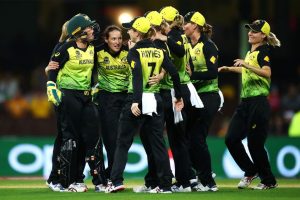 Australia will face India in the ICC Women’s T20 World Cup 2020 Final after the hosts came through a nerve-shredding semi-final against South Africa in Sydney on Thursday, 5 March.

The hosts overcame South Africa by five runs (DLS method) in their Sydney semi-final. India progressed after their semi-final with England was abandoned.

Meg Lanning led from the front to score 49 before taking two brilliant catches in the Proteas’ chase of 98 in 13 overs, adjusted by the DLS method following rain at the SCG.

Dane van Niekerk’s side gave it their all but fell five runs short of a maiden Final, with Australia now just one win away from a fifth Women’s T20 World Cup title.

They’ll face India at the MCG on 8 March – International Women’s Day – after their semi-final against England was abandoned without a ball bowled.

Now’s the time to prove who’s the best – Malinga

January 2, 2019 byRevatha No Comments
Remember Sri Lanka were three-time finalist of the tournament winning it in 2014.

We strongly condemn the death threats made to the President of ALFEA: Nimal Siripala