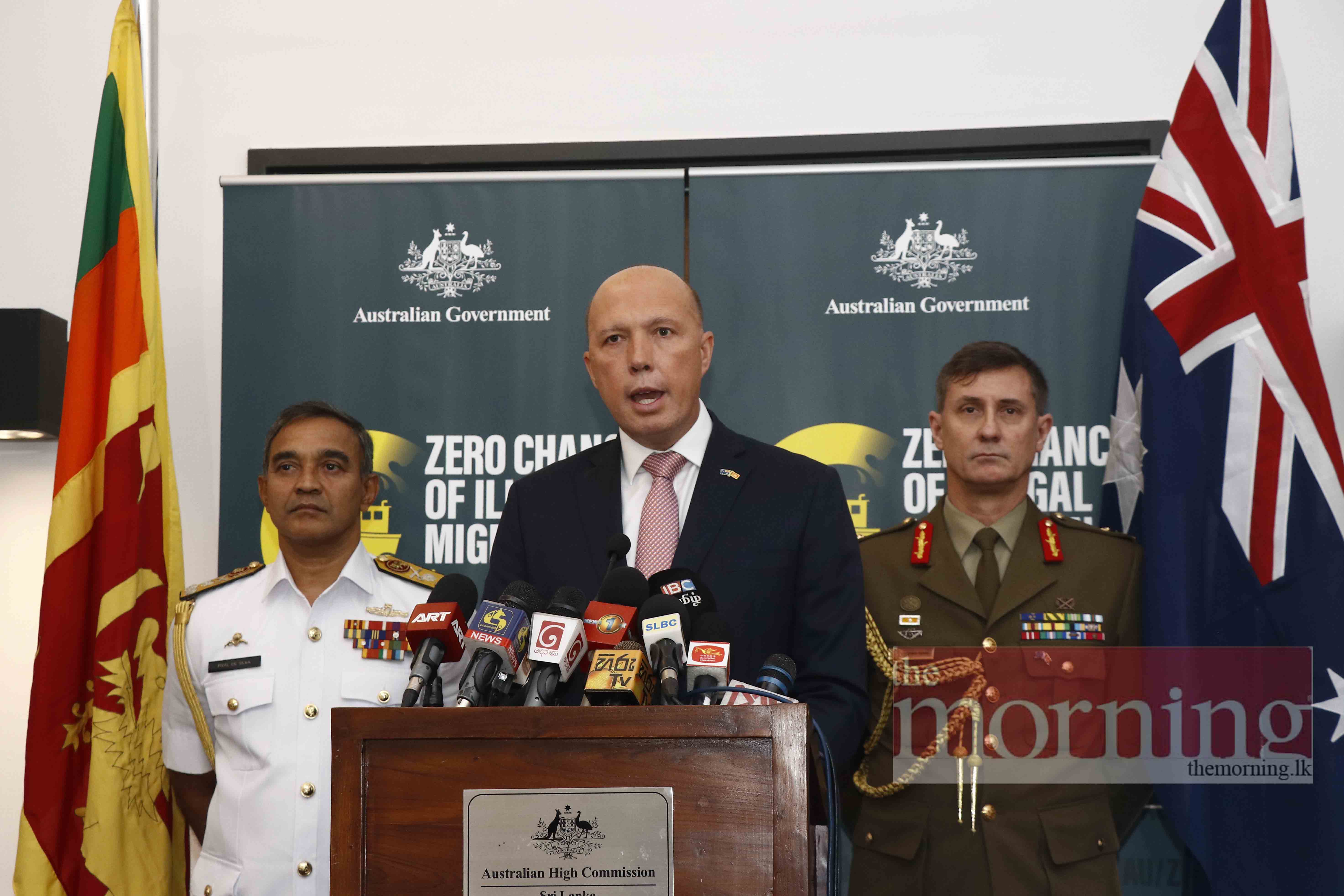 Home Affairs Minister Peter Dutton was in Sri Lanka last week for talks with the Government and other authorities on coordinated efforts against human smuggling as well as to launch a new campaign to deter boat people from making the illegal journey.
A campaign titled “Zero Chance” will involve an awareness programme through advertisements in the local media funded by Australia.

Dutton noted last week that while there was a lull in boat people attempting to reach Australia, there was an uptick in activity in the last month or so which has caused concern.

When contacted by The Sunday Morning, the Australian Department of Home Affairs said that the Governments of Australia and Sri Lanka continue to work in close co-operation to combat people smuggling in the region.

“Importantly, any individual who attempts to travel to Australia illegally by boat will never be permitted to resettle there,” a spokesperson from the Australian Department of Home Affairs told The Sunday Morning in an emailed response.

Asked if Australia kept a tab on the returnees as there are concerns over their safety when they are deported to Sri Lanka, the spokesperson said that once Australia had met its international and domestic legal obligations, illegal immigrants from Sri Lanka were handed over to Sri Lankan authorities.

The spokesperson said that, as at 5 June 2019, there were 58 Sri Lankan nationals located in Regional Processing Countries. Of these, 43 were in Nauru and 15 in Papua New Guinea (PNG).

On 29 May, 20 people were returned to Sri Lanka after a failed attempt at a dangerous maritime people-smuggling venture targeting Australia.

This follows the Sri Lanka Navy rescue of 41 people from a vessel in distress in the Indian Ocean, which faced difficulties while trying to reach Australia illegally.
Navy Spokesman Lieutenant Commander Isuru Sooriyabandara said that the Sri Lanka Navy has a very close relationship with Australia and shares information on boat people.

“We share information with Australia. We also hold workshops on this issue,” he said.
He also noted that Australia had provided the Sri Lanka Navy with assistance to crackdown on human smuggling.

Major General Craig Furini said that they do that by denying anybody who tries such a journey from settling in Australia and by maintaining a continuous, strong presence of ships and planes to Australia’s north on its maritime and air approaches, including approaches to Cocos Keeling and Christmas islands, that Sri Lankan illegal immigrants target and have targeted in the past.

Apart from Australia, illegal asylum seekers use the sea route to head to Reunion Island to seek asylum.

Sooriyabandara told The Sunday Morning that the Navy was closely monitoring both routes for attempts by Sri Lankans to travel by boat to those countries illegally.

There have been allegations that some Navy officers could be involved in the human smuggling operations as it involves huge sums of money.

However, Sooriyabandara asserted that whoever is involved in the human smuggling operations will be dealt with under the law, no matter who they were and what post they held.

“We should not try to focus on the designation of those involved in these operations. As far as we are concerned, action will be taken on anyone who is accused,” the Navy Spokesman said.

Sooriyabandara also dismissed the claim that most people were seeking asylum on the basis that the country was not stable.

The Navy Spokesman said that most people who seek asylum are those from fairly decent families and not those who were really suffering economically.

He said that the past trend had been that those seeking asylum in Australia had been from the areas of Chilaw, Negombo, and adjoining towns.

“We find that some of these people get used to seeing the foreign culture when foreigners stay in those areas and want to be part of that culture,” he said.

However, the Navy Spokesman said that the trend had now spread to areas like the North and even Kurunegala where some people from these areas also wanted to go abroad.

However, since they could not afford the airfare or visa fees, they get duped by human smugglers and attempt the boat journey.

Sooriyabandara said that there was no need to feel compassion for those looking to reach a foreign country illegally and that the Navy will ensure it does its part to crackdown on human smuggling.

January 8, 2022 byNews Admin No Comments
Development projects taking place in the Polonnaruwa District are close to completion and will soon be open to the public.

March 14, 2021 byNews Admin No Comments
The growth of Sri Lanka's construction sector has led to an increase in demand for building materials, chief among them being sand, which is primarily sourced from river beds.