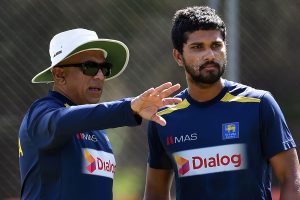 Australia look to finish their home summer on a high by winning the second and final Test against Sri Lanka in what will be the first game in the longest format to be played at the Manuka Oval, Canberra.

An innings win in the day/night Test in Brisbane gave Australia their first Test win of 2019 and the hosts will hope to continue the winning run and complete their first Test series win since the Ashes at home last season.

While Sri Lanka’s debacle in the first Test can be put down to some ordinary batting in both innings, half-centuries from Marnus Labuschagne and Travis Head led Australia to a good first-innings total of 323 and they will want to continue in that fashion and even build on it.

But their batting woes, which had come to the fore during the 2-1 defeat to India earlier in the year, have not been completely overcome as Usman Khawaja and Joe Burns, two of the top three  in the line-up, managed just 11 and 15 at The Gabba.

Captain Tim Paine and bowling all-rounder Pat Cummins got ducks but debutant Kurtis Patterson impressed with a steady 30. The bowlers did the rest, with Cummins picking up 10 wickets in the match and Starc crossing 200 Test wickets. Jhye Richardson, also on debut, finished with five wickets.

Paine has named an unchanged XI for the Test which means there will be no Test debut for the uncapped Marcus Stoinis, who was included in the squad ahead of the second Test.

“We’re unchanged which is nice,” Paine told reporters on the eve of the Test. “Coming off a good win we are happy with our combination. This pitch is probably slightly different, we just think that we’ll be able to get more overs out of Marnus (Labuschagne) on a pitch like this.”

For Sri Lanka, Suranga Lakmal’s five-wicket haul was the only ray of hope in an otherwise disappointing performance. Barring Niroshan Dickwella’s 64 in the first innings, no Sri Lankan batsman could put up a score of substance.

The trio of Dimuth Karunaratne, captain Dinesh Chandimal and Kusal Mendis failed in both innings and as a result, Sri Lanka were bowled out for sub-150 scores, leaving little scope for the bowlers.

There are injury concerns too for the visitors as fast bowlers Lahiru Kumara and Dushmantha Chameera have been ruled out of the final Test due to injuries. Uncapped Chamika Karunaratne has been named as a replacement bowler.

Kumara sustained a hamstring injury during the first Test and did not bat in the second innings. Chameera, too, suffered an ankle injury while bowling in the first game. Kasun Rajitha and Vishwa Fernando are likely to come in as replacements for the injured.

With such uncertainties hovering over their head, Sri Lanka will need a special performance to lift their spirits and a repeat of Mendis’ 176 against Australia at home in 2016 will do no harm to his team.

Pat Cummins (Australia): He finished with 10 wickets in the match at The Gabba and has been in good form with the bat over the past five Tests. The elevation to Test vice-captaincy gives him an element of added responsibility too. Sri Lanka will be wary.

Suranga Lakmal (Sri Lanka): The leader of the Sri Lankan pace attack will have extra responsibility on his shoulders in the absence of Kumara and Chameera and Sri Lanka will bank on his experience. He has form on his side, having picked up 5/75 in the Australian innings.

This is the first Test match to be played at this venue and so both teams will start as freshers, not knowing what to expect. The weather is expected to be warm and sunny on the first three days with some rain expected on the fourth. The third day could be the hottest, with temperatures soaring as high as 33 degrees.

February 7, 2021 byNews Admin No Comments
The prospects of Sri Lanka touring West Indies this month, for two Tests and three ODIs and T20Is each, became almost zero by Friday (5) after concerns over a couple of their tour party members..

August 30, 2018 byRevatha No Comments
SLC T20 League round-robin stage comes to an end in Kandy. Will it be a Colombo versus Dambulla final on Sunday?