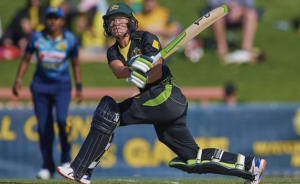 Australia opener Alyssa Healy hit the highest score in women’s Twenty20 internationals with an unbeaten 148 off 61 balls in victory over Sri Lanka.

The wicketkeeper, 29, beat the previous mark of 133 not out set by team-mate Meg Lanning against England in July.

Healy struck 19 fours and seven sixes, bringing up her century off 46 balls as the hosts posted 226-2 in Sydney.

After Sri Lanka could only make 94-7 in reply, Australia won by 132 runs to secure a 3-0 series whitewash.

Healy’s maiden T20 century in her 101st appearance in the format is the fastest by an Australian, and second only in the women’s game to West Indian Deandra Dottin’s 38-ball ton against South Africa in 2010.

Her 148 is the fourth-highest individual score in all T20 internationals, behind compatriot Aaron Finch’s 172 against Zimbabwe in 2018, Afghanistan’s Hazratullah Zazai 162 against Ireland in February and Finch’s 156 against England in 2013.

Australia’s margin of victory is their biggest in women’s T20 internationals and 10th biggest of all time.BBC

November 22, 2018 byRevatha No Comments
The ICC Women’s World T20 2018 was set to enter its knockout phase as the top four teams wrapped up final preparations for their semi-finals at the Sir Vivian Richards Stadium in Antigua on Thursday.

July 25, 2021 byRevatha No Comments
Spicy Gossip from Super Sport of the Paradise Island