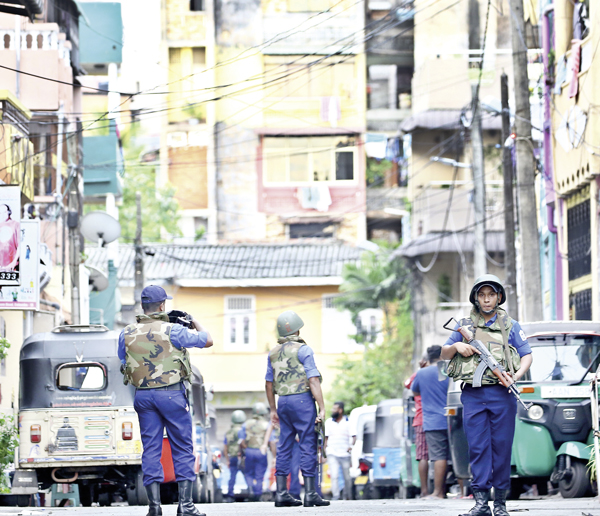 Authorities were on alert over the past few weeks as explosives surfaced in parts of the country, raising fears of a threat to national security.

At least two unverified documents which surfaced on social media warning of a possible threat added to the fears of the public. However, the Police and security forces played down the concerns, adding that there was no evidence to link the discovery of the explosives to any plan to carry out a fresh terrorist attack.

In August, the Terrorist Investigation Division (TID) uncovered a large haul of weapons and explosives hidden in the Karandiya area in Pallai, Jaffna based on the information revealed through the interrogation of Pallai Hospital Judicial Medical Officer (JMO) Sinniya Sivaruban, who was arrested over links to terrorist organisations and detained at the Jaffna Police under the TID.

An AK-47 rifle, two live magazines, 120 rounds of live ammunition, 11 hand grenades, 10 kg of PE10 explosives, and a pair of binoculars were found hidden in the Karandiya area of the Pallai Police Division.

On 18 September, several explosives and a T-56 firearm was found buried in a plot of land located in close proximity to a road leading to Oluvil Harbour in Palamunai, Ampara.

Police Media Spokesperson SP Ruwan Gunasekara stated that the raid proceeded after a tip-off was received by the officers of the State Intelligence Service (SIS).

A cache of explosives including eight claymore bombs were recovered from a plot of land in the Mullaitivu area on 30 September. The explosives had been recovered after the land owner had informed the Police of the matter. Among the explosives were 50 detonators and wire chords. The Bomb Disposal Unit of the Special Task Force (STF) had defused the claymore bombs weighing 20 kg.

On 2 October, the Navy recovered a haul of explosives during a patrol carried out in the Kuchchaveli beach area in Trincomalee.

A suspicious buoy which was floating in the seas off Kuchchaveli beach was observed during a patrol carried out by the Eastern Naval Command. A further search uncovered four non-electric detonators, four safety fuses, and 60 g of a substance suspected to be explosives packed in the buoy.

The following day, the Navy once again recovered 1.3 kg of explosives during a search operation carried out in the general area of Gurunagar.

The attacks on Easter Sunday killed over 250 people and injured around 500 others in six near-simultaneous and co-ordinated explosions carried out by local jihadist group National Thowheed Jamath (NTJ) linked to the Islamic State (IS), which rocked three churches and three luxury hotels frequented by tourists in Sri Lanka. Around 40 foreign nationals and 45 children were reported to be among the dead.

While the investigations were still being carried out by the CID, emergency regulations imposed by President Maithripala Sirisena following the Easter Sunday terror attacks saw a few extensions and was lifted in August.

However, even though emergency regulations were lifted, the ban on terrorist organisations, which saw the curtailment of activities by the NTJ, Jamathe Millathu Ibrahim (JMI), and Vilayath As Seylani, under Gazette Extraordinary No. 2123/3 issued by the President on 21 May 2019, is still in effect as those organisations continue to face the ban under Clause 27 of the Prevention of Terrorism Act No. 48 under the 1978 Constitution.

In this backdrop, the discovery of explosives, detonators, and ammunition came back into the limelight. A letter, allegedly written by the OIC of the Fort Police, has been circulated on social media.

However, when The Sunday Morning queried whether there was any link between the recent recovery of explosives and information alleged to be received by the Police, Police Media Spokesman SP Gunasekara ruled out any connection between the two incidents.

However, according to Police Headquarters, the details mentioned in the letter had not been confirmed by the intelligence units and a special investigations unit had already launched a probe in that regard.

Accordingly, Gunasekara said that an investigation would be carried out to determine whether the letter had been sent with the motive of creating disturbances.

Meanwhile, concerns were raised over the alleged relaxation or removal of security from Catholic churches around the country.

Speaking to The Sunday Morning, Military Spokesman Brigadier Sumith Atapattu denied allegations that security had been completely reduced, but said that after the lifting of emergency regulations, the powers of security vested with the military officers had been given to the Police and thereby police security was provided for those churches and government schools, apart from some churches and schools where army posts remain.

“The powers had been given so that military personnel would step in if there was any requirement to provide security,” he said.