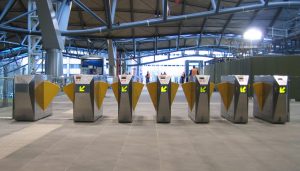 The establishment of Sri Lanka’s first-ever automated railway ticketing system has been temporarily suspended due to a lack of funds, with no sign of resumption in the foreseeable future.

“This is one of those projects that have been stopped by the new Government, citing issues with funds. But there was a local requirement for this project to be halted,” sources involved in the project told The Sunday Morning Business on the condition of anonymity.

The automated system was planned and initiated under the former Government two years ago. As exclusively reported by The Sunday Morning Business last year, a Chinese company was awarded the tender in August 2019 following obtaining Cabinet approval, and the system was set to be completed by end-2019.

However, since then, no significant progress was made, apart from a statement being issued by the Ministry of Passenger Transport Management in February 2020 noting that they are submitting a cabinet proposal to set up an electronic ticketing system.

Our sources said that President Gotabaya Rajapaksa’s manifesto promises an automated ticketing system for railways but added that they are not certain whether priority will be given to this particular project in this plan.

Asian Development Bank (ABD) is the funds provider of this $ 20 million project. ADB in 2019 approved a $ 160 million loan to modernise Sri Lanka Railways through a number of improvements. The smart ticketing system was also included in this grand railway modernisation initiative. This is ADB’s first loan to Sri Lanka’s railway sector.

As Sri Lanka lacks the resources to build automated ticketing machines, ADB pledged to import them with the required software installed.

Following the implementation of the automated railway ticketing system, commuters were expected to do away with long queues as tickets could be bought in four different ways: Mobile app, vending machine, electronic card at gates, or counter.

The ticketing system was expected to revolutionise Sri Lanka’s obsolete railway station network with world-class imported machines to provide convenience to long-suffering passengers. According to the Department of Railways Annual Report 2017, 136.5 million passengers travelled by train in 2016 and this number increased by 0.5% in 2017 to 136.6 million.

All our attempts to contact Minister of Transport Gamini Lokuge were futile.

DFCC gets $ 150 m from US for MSME development

July 12, 2021 byNews Admin No Comments
The United States is contributing to Sri Lanka’s economic resilience through the provision of a financial facility of $ 150 million. The facility awarded by the United States International Development