August 31, 2020 by themorningeditor1 liberty No Comments 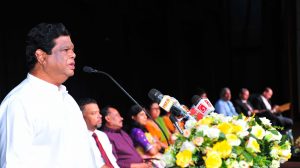 The Government has pledged to establish an Export-Import (EXIM) bank in the mould of a development bank in Sri Lanka to facilitate access of capital to entrepreneurs.

This pledge was made by Minister of Trade Dr. Bandula Gunawardana at the Sri Lanka Export Promotion Vision Forum organised by the Sri Lanka Export Development Board (EDB) in collaboration with the Ministry of Trade on 29 August at NSBM Green University. The forum was the first large-scale, public meeting the Minister had with the nation’s exporter community since assuming duties.

An EXIM Bank is a specialised financial institution wholly owned by the Government of India, set up for financing, facilitating, and promoting foreign trade of India. Successive budgets in 2016, 2017, and 2018 promised the setting up of an EXIM Bank in Sri Lanka, but these plans never materialised.

During the event, representatives of industry associations pointed out that the Department of Commerce, which currently comes under the purview of the Ministry of Foreign Affairs, must be brought within the authority of the Ministry of Trade. The Minister agreed with the suggestion and promised to draw it to the Government’s attention.

Gunawardana also assured the exporters that the Government would take prompt action to provide solutions to the difficulties faced by export industries with regard to sourcing raw materials from overseas due to the recent restrictions imposed on imports.

Meanwhile, the Minister also revealed that President Gotabaya Rajapaksa has gazetted the Export Development Council of Ministers in terms of the EDB Act, which has not been convened for more than 20 years, resolving a longstanding impediment in terms of addressing the issues of exporters expeditiously.

A large number of exporters took part in the forum and the event was also graced by State Ministers Lasantha Alagiyawanna and D.V. Chanaka, Secretary to the Ministry of Trade Badra Jayawardena, EDB Director General Chitranjali Dissanayake, and Board of Investment of Sri Lanka (BOI) Director General Sanjaya Mohottala.

Gunawardana declared that it is only through increasing exports the Sri Lankan economy, which has been challenged by foreign debt servicing, can be salvaged in order to realise a better future for the country’s next generation.

He opined that a substantial amount of borrowing via sovereign bonds during the previous Government has put the economy under a severe stress with a large number of bullet payments falling due over the coming years.

November 3, 2021 byNews Admin No Comments
The Cabinet of Ministers on 1 November granted approval to the resolution put forward by Minister of Fisheries Douglas Devananda to implement a concessionary loan scheme through state banks to provide

Crypto is no longer limited to big investments

September 9, 2021 byNews Admin No Comments
Cryptocurrencies, which were a few years back viewed as volatile and fringe digital assets, have since emerged as viable competitors to fiat currencies due to the widespread recognition of its immense