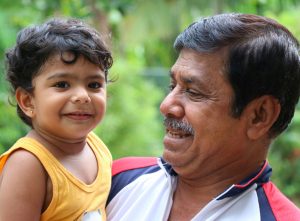 Passing on tradition: Bandula Warnapura, aged 65, with one of his grandchildren when the Sunday Morning met him for the first sports interview of its first issue in October 2018. Photo Saman Abeysiriwardana

It was Warnapura who we first met when The Sunday Morning newspaper was launched in October 2018. He was a retired ‘leader’ then, who had retained his interest on the game to make an administrative change in the local cricket governance.

He talked about Sri Lanka’s first One-Day International (ODI) win, over India in Manchester, England in 1979, under his ‘accidental leadership’. He happened to have captained the side in that match as the regular Captain of the team, Anura Tennekoon, had been indisposed.

Though it was not the centre of our topic in that interview, Warnapura talked about the infamous 1982 Rebel Tour of South Africa. By that time he had been formally appointed in Tennekoon’s place.

There, he remembered with some deserving pride that it was he who convinced the then 18-year-old Arjuna Ranatunga not to join the Sri Lankan ‘rebel’ tour party to the apartheid South Africa.

“I told him, ‘podi eka’ (small fellow – Arjuna) you should not join us. I saw that he had a great future in front of him and that he can make great change in our cricket,” Bandula told us.

Though the ‘rebels’ were later branded as traitors who prostituted the country’s pride for mere dollars, Bandula had done some remarkable damage control, so to say, which was proved by the sheer fact that the same ‘podi eka’ led the country into the pinnacle of world game in barely 15 years time.

Ranatunga had told this writer in March this year that if he were to name someone who really instilled ‘his kind of approach’ to international cricket, it was ‘Bandula ayya’ (elder brother).

“I didn’t usually show any undue respect to any of our opponents on the field how big their names were. On the field, they are just another opposition for me and I just wanted to win against them. But off the field, we need to show our respect to the seniors. That’s another matter,” said Arjuna.

Ranatunga added: “Whoever blames me or sledge me when I bat, I will return it to him when he comes to bat, however big a name he could be.”

It was a thought pattern that Bandula, the Nalandian, had passed onto Arjuna, the Anandian. Duleep Mendis, who led Sri Lanka in between, was the perfect harbinger. That was the thought pattern that propelled Sri Lanka, after systematic organisational background support, into the dominance of world cricket in the 1990s. That was to be the true ‘Sri Lanka cricket brand’ which we could very easily and clearly indentify after that.

So ‘Bandula Warnapura’ is an icon of a phenomenon – a pioneer, a trailblazer. He is, in a way, an epitome of ‘Sri Lanka cricket’ post 1980s when it reached new vistas.

Understandably therefore, for the Sri Lankan citizens who are around fifty of more, ‘Bandula Warnapura’ is a hero. That’s why yesterday (18) becomes a very sad day, especially for that generation which witnessed that great transition.

Forget the ‘rebel’ Bandula, live the memory of hero Bandula! Bandu, you did your part.

A Quote from a Legend