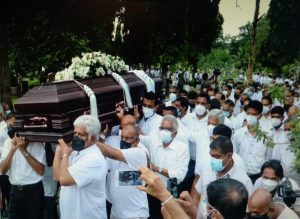 Bandula Warnapura, who passed away on Monday (18) at the age of 68, bid adieu yesterday (19) as many of his fans, contemporary national players, and subordinates participated in his funeral, took place at the Borella Cemetery, Colombo.

The life and times of Sri Lanka’s first Test cricket Captain and one who had instigated a decisive ideological change in the national cricket domain was seen hailed by all and sundry following his demise after a brief illness. The funeral was held amid the current Covid-19 pandemic restrictions.

Among those who were present at the Borella Cemetery were Roy Dias, Arjuna Ranatunga, Aravinda de Silva, Roshan Mahanama, Sanath Jayasuriya, Nishantha Ranatunga, and Farveez Maharoof.

Following are two condolence messages sent to the Morning Sports by Sudat Pasqual and Rohan Jayasekera who played under Warnapura as teenagers at the 1979 World Cup. Both Pasqual and Jayasekara are presently living in Canada.

* It was a sad day (Monday, 18th Oct.) for all of us. There is some serious nostalgia with regard to Bandu. When he got hit by a thunderbolt by West Indian fast-bowler Sylvester Clarke on his head in Galle in 1979, I was on the other side of the wicket batting with Bandu. I swiftly ran over to him and I thought it was extremely serious as, by then, Bandu seemed not breathing – he was biting his tongue and his eyes looked rolled up too! Anyway I still remember that I quickly pulled his jaw open so he could get some air in. (Warnapura had reportedly been unconscious for six hours after being floored by that vicious Clarke bouncer, during those days where there were no protective head gear. Later he rose from the calamity to take reins from Anura Tennekoon as Sri Lanka’s next cricket Captain.) 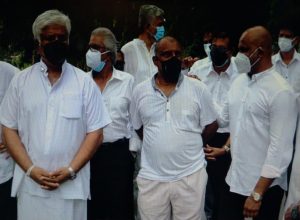 Ever since I heard that Bandu was hospitalised, I was thinking of him and wishing he’ll pull through. But it was not to be. I’m gutted by Bandu’s passing. Good night Skip! Time for you to rest!

July 22, 2021 byRevatha No Comments
News from the world of sport