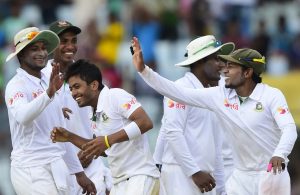 After discussions on quarantine measures, the Bangladesh Test tour has been officially confirmed

The Bangladesh tour of Sri Lanka has finally been officially confirmed, our sources in Bangladesh said yesterday (6).

In spite of the fact that the tour had almost been confirmed with the schedule of the tour too was out last week, still there were doubts over whether it can actually take place due to the Covid-19 situation and various travel and quarantine restrictions followed by the two countries.

SL’s ODI tour of May may not happen

Bangladesh are to play two Test matches in Pallekele starting from 21 April with a tour match scheduled to be held on 17 and 18 April. Bangladesh will travel here on 12 April.

Anyway, news coming from Bangladesh further added yesterday that the return tour of Sri Lanka to Bangladesh, for three ODIs in May, will be in serious doubt, most likely due to the pandemic situation there.

The Bangladesh Test tour was originally scheduled for October last year but was postponed due to Covid-19 lockdowns in operation then. During that period, the Sri Lankan health authorities insisted the touring parties should undergo two weeks of quarantine upon their arrival.

This requirement had reportedly agitated the Bangladesh cricket authorities that time who didn’t want to send their national team for full two weeks of found in-house quarantine. The Bangladesh Cricket Board (BCB) is headed by Nazmul Hassan Papon who is also the President of the Asian Cricket Council (ACC) and a current MP from the Kishoriganj-6 constituency.

Then in January England visited Sri Lanka for the first time after the outbreak of the pandemic and they were allowed to outdoor practices after just three days of quarantine. The same protocol will apply to the Bangladeshi this time, the sources said.

There were suggestions, reportedly from the Sri Lankan authorities, to again have 14 days quarantine for visiting teams making the Test tour seemingly in jeopardy. Yet the authorities of the two countries have finally agreed to a three-day quarantine.

“In a message to the BCB’s Cricket Operations Department on Monday (5), Sri Lanka Cricket (SLC) has confirmed the three-day quarantine policy allying fears about the tour of Sri Lanka,” Bangladesh media reported yesterday.

Your story needs to be an example for future – Namal