Sport can be savage. Sport can also be brutal and unforgiving. But sometimes sport also throws up moments that reinvigorate your faith in humanity 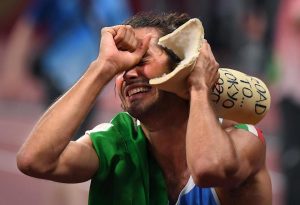 Right before doing the last jump, and then after winning the high jump, Italy’s Gianmarco Tamberi placed on track the plaster cast he saved since 2016 when he broke his leg 15 days before Rio 2016

Although a lot is said and discussed regarding the spirit of Olympics, it is rarely ever on display on the field of sports at the Olympic Games. Distilling down a bit further, sport itself is supposed to be all about sportsmanship, camaraderie, as well as learning to win and lose with dignity. But that also happens very rarely. This is especially true in ‘the cutthroat business and survival’ that has become sports. Whilst that might be understandable at a professional level, what is most incomprehensible is the fact that this attitude has now seeped down to the level of school competitions as well. Therefore, it was high time that the world of sports was reminded of the values that made sports, but more importantly, the Olympics; one of the most looked forward to events every four years.

This year’s Olympics has certainly had its share of problems. From being postponed for one year because of the pandemic, accusations of bribery and corruption in the run up to the Games, protests from the general public regarding the cost as well as the health and safety factors because of the pandemic, it has had dramas aplenty even before it officially began. Even when it began with the venues being mostly empty, because of the rising coronavirus cases, as well as the strict segregation of the athletes and its widely derided “no sex” policy, Tokyo 2020 has certainly been one of the most unusual Olympics ever, if not THE most unusual.

But, with all that is going on, it has certainly been a gripping Olympics so far. With another man, other than Usain Bolt, winning the men’s 100 meters event, the previously “unbreakable” record of Florence Griffith Joyner being broken in the women’s 100 meters, Tom Daley finally fulfilling his undoubted promise and winning the diving gold medal he so badly craved, and one of Belarusian sprinters refusing to leave the airport by complaining to the Japanese police that she is being kidnapped, it has certainly been a memorable Olympics for the right and, in some cases, for the wrong reasons as well.

But, after all, nothing has captured the imagination of the sporting public as much as what happened at the men’s high jump event at the Olympics on Sunday (1).

Never since the 1912 Olympic Games has there been a shared gold medal at the Olympics. Both Qatar’s Mutaz Essa Barshim, 30, and the 29-year-old Italian Gianmarco Tamberi ended with jumps of 2.37 metres and had no ‘failed attempts’ until they attempted to clear 2.39. After three failures each at that height, an Olympic official first offered them a jump-off to decide the winner. “Can we have two golds,” Barshim asked him. The official nodded, and the two athletes clasped hands and whooped for joy. And, like that, the two athletes entered into the Olympic and world sports folklore forever. Millions watching it live on TV and many more millions who watched the clip of the two athletes jumping for joy on social media will never forget it in their lives.

And as Barshim later said, “I look at him, he looks at me, and we know it. We just look at each other and we know, that is it, it is done. There is no need,” Barshim said. “He is one of my best friends, not only on the track, but outside the track. We work together. This is a dream come true. It is the true spirit, the sportsman spirit, and we are here delivering this message.” It was also a win-win situation for the Italian, who broke his ankle days before the Rio Games in 2016. “After my injuries I just wanted to come back, but now I have this gold, it’s incredible,” he said. “I dreamed of this so many times. I was told in 2016 just before Rio there was a risk I wouldn’t be able to compete anymore. It’s been a long journey.” Barshim who is considered one of the best high jumpers the world has ever seen, has a personal best of 2.43 m which is the second-highest jump of all time, behind Cuban Javier Sotomayor’s world record mark of 2.45 set in 1993.

Right before doing the last jump, and then after winning the high jump, Tamberi placed on track the plaster cast he saved since 2016 when he broke his leg 15 days before Rio 2016. Therefore, this was a redemption of the highest order for him in his event. “I still can’t believe it happened,” he said. “Sharing with a friend is even more beautiful … It was just magical.”

“For me, coming here, I know for a fact that for the performance I did, I deserve that gold,” Barshim said. “He did the same thing, so I know he deserved that gold.” It was a display of sportsmanship that delighted Olympics spectators around the world. The reaction on social media was swift, with some describing it as the best moment of the Games.

Sport can be savage. Sport can also be brutal and unforgiving. But sometimes sport also throws up moments that reinvigorate your faith in humanity. This was certainly one of those moments. Perhaps these two great athletes never really understood at that instant moment what they were accomplishing by sharing that gold medal. But surely as time passes, they will, without a doubt. And perhaps then, they will understand that, by that particular gesture they probably had accomplished way more than they could have, if only one of them had won the gold medal.

December 13, 2018 byRevatha No Comments
SLC Election Committee says elections not delayed, as reported by some media.