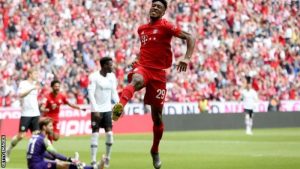 Bayern Munich were crowned champions of Germany for the seventh successive season with a crushing last-day victory over Eintracht Frankfurt.

Niko Kovacic’s side, who trailed leaders Borussia Dortmund by nine points after 12 games, needed only a draw to secure a 29th Bundesliga title.

David Alaba, Renato Sanches, Franck Ribery and Arjen Robben made sure of Bayern’s victory at the Allianz Arena.

They finished two points ahead of Borussia Dortmund, who won 2-0 at Borussia Monchengladbach thanks to goals from England winger Jadon Sancho and Marco Reus. (BBC)

September 25, 2018 byRevatha No Comments
The ODI squad for the forthcoming series against England has not yet been released, but it has been named and sent to the sports ministry for approval.