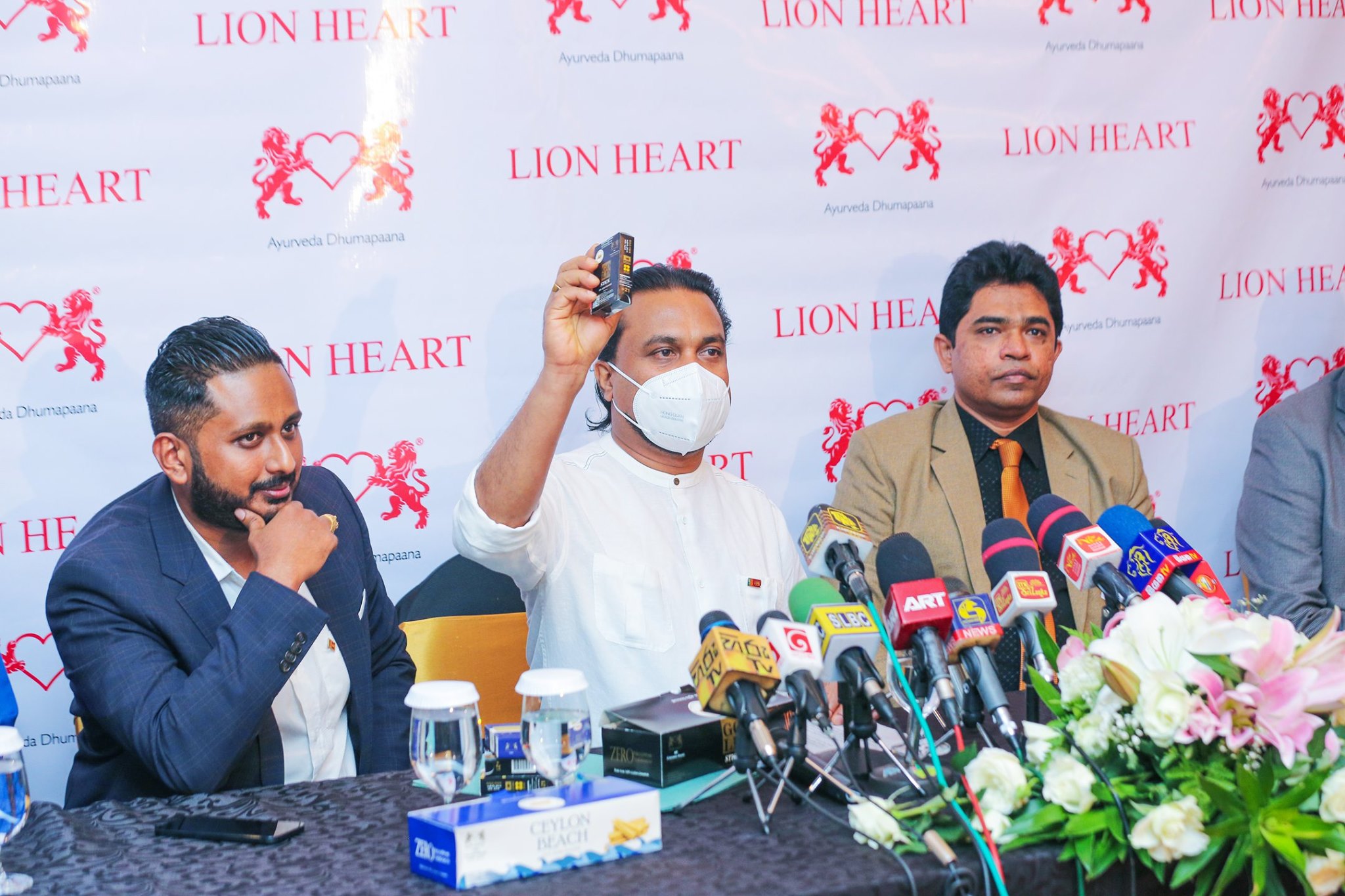 Behind the sweet and deadly smokescreen


The cinnamon cigarette is one such new idea Sri Lanka is struggling to take a decision on. While the opposition against it is on the rise, certain parties also claim that the authorities should accept that the potential benefits of cinnamon cigarettes outweigh the drawbacks.


Even though not much research has been conducted in Sri Lanka about the pros and cons of inhaling cinnamon smoke, certain international researchers have found that cinnamon smoke can cause serious damage to the lungs, including pneumonia, inflammation, and infections, among others.


To look into the situation with regard to the newly introduced cinnamon cigarettes, and what makes it a good or a bad product, The Morning spoke to several persons who are in a position to shed some light on the matter.


He further claimed: “If a person is willing to cut down on smoking or quit smoking, this can at least be a good alternative.”


Speaking further to The Morning, he claimed that all the relevant tests have been conducted and that the necessary approvals have been obtained. According to him, the manufacture and production of the cinnamon cigarettes commenced after obtaining permission from all the relevant parties.


Prasanga claimed that in addition to the patent, permission has been obtained from the Ministry of Industries as well. Also, he claimed that the company has obtained a document issued by the National Authority on Tobacco and Alcohol (NATA) under former NATA Chairman Dr. Palitha Abeykoon, stating that cinnamon cigarettes do not come under the NATA Act.


When contacted by The Morning yesterday (25), Dr. Abeykoon said that as far as he knows, he has not issued any such document. He added that cinnamon cigarettes, however, come under the existing NATA Act.


Current NATA Chairman Dr. Samadhi Rajapaksa also said that he cannot confirm whether such a document has been issued. He added that if there is in fact such a document, those who claim to have it should present it.


Furthermore, Prasanga claimed that prior to the commencement of the production, samples of the cinnamon cigarettes were sent to several authorities as well.


He added that cinnamon cigarettes are scheduled to be exported too, and that the company has already sent the first shipment to Australia. Prasanga said that the countries to which cinnamon cigarettes are to be exported, have also conducted tests and obtained certifications about the product. He also claimed that certain tests that cannot be conducted in labs in Sri Lanka have been done in foreign countries after sending the samples.


“If cinnamon cigarettes were more harmful than tobacco cigarettes, countries such as Australia would not have decided to import it. Around 10 countries have signed agreements with us to obtain this product,” he said.

Prasanga said that if the authorities were genuinely concerned about putting an end to the habit of smoking, they should have focused on banning tobacco cigarettes, which are available in the country, instead of attempting to ban less harmful cinnamon cigarettes.


Prasanga also said that the company does not promote cinnamon cigarettes, claiming that it is completely harmless, adding: “We never say that smoking is a good habit, and we continue to maintain that smoking is bad to health. Cinnamon cigarettes are, however, less harmful compared to tobacco cigarettes. Some allege that inhaling cinnamon smoke is bad, even though consuming cinnamon in other ways is acceptable. But various types of smokes are everywhere around us, and anything, if taken in excessive amounts, can be harmful.”


In response to the allegations that cinnamon cigarettes promote the habit of smoking and that it will lead to non-smokers also picking up the habit of smoking, he claimed that it is not true. “What we wanted to do was give tobacco smokers a less harmful alternative; that is why we made a cigarette and not some other type of product that can produce cinnamon smoke.”


Speaking of the opposition raised against cinnamon cigarettes, Prasanga alleged that some of the authorities and organisations expressing opposition seem to appear for their political objectives.


“If they start a discourse against smoking in general, we are ready to stop the production. The NATA is expressing opposition based on its Act, which was introduced by the British colonisers. The Act says that it is prohibited to sell or promote any product that resembles a cigarette, whether it contains tobacco or not. But, tobacco companies are allowed to sell cigarettes freely, and we do not see the same opposition. Around 22 million cigarettes are sold in Sri Lanka per day, and what we introduced was a less harmful alternative. A large share of the revenue generated through the sale of tobacco cigarettes goes to foreign countries but nobody talks about it.”


He noted: “We do not have financial resources or the intention to spend money and fight with the tobacco cigarette manufacturing companies. If the cinnamon cigarette gets banned, we will have to focus on foreign markets.”

Meanwhile, the Alcohol and Drug Information Centre (ADIC) said that the cinnamon cigarette does not constitute a less harmful alternative for tobacco cigarettes, but instead, it will indirectly encourage smokers, who are trying to quit smoking, to continue to partake in the habit.


ADIC Director (Human Development and Administration) Sampath De Seram further told The Morning: “Countries around the world have started kicking the habit of smoking. The objective of introducing products such as cinnamon cigarettes, claiming that they are not as harmful, is an attempt to make people continue the habit. The main objective is keeping the habit of smoking alive, and it does not help smokers in any way. Those promoting cigarettes do not like people to quit the habit, and the industry is using various methods to do that. Also, this does not promote the idea that quitting the habit of smoking is good; instead, it keeps the smokers in the habit but with a new product. Also, those promoting cinnamon cigarettes do not reveal the harms of smoking it.”


Speaking of the drawbacks of cinnamon cigarettes, De Seram added that humans’ lungs are not made to inhale smoke, and that specialist doctors have pointed out how harmful smoking can be.


“Cinnamon cigarettes do not cause the same damage tobacco cigarettes do, but there is still damage caused by inhaling smoke. A number of researches conducted around the world have shown the damages caused by smoking cigarettes containing various ingredients other than tobacco, even though no such findings are available concerning the Sri Lankan context,” he noted.


De Seram also pointed out that there is no scientific data to suggest that smoking cinnamon cigarettes is harmless, and what the data has shown is that smoking is not healthy.”


He added: “Even though there are certain instances where Ayurvedic treatments involve inhaling a smoke (dhumpana), it is not the same. Such treatments are intended to achieve a specific result, and are only recommended to be done only at a certain time, in certain amounts, as prescribed. They do not recommend its regular use as regular use would cause the illness to exacerbate or result in a new illness.”

Smoke is harmful, not cinnamon

When contacted, a Spokesperson for the Sri Lanka Medical Association (SLMA) told The Morning that the claim that cinnamon cigarettes can help tobacco smokers quit smoking has not been proven, and that cinnamon smoke can be classified as a carcinogen.


He explained: “If consumed in other ways, cinnamon is good for the body, but when the cinnamon smoke is inhaled, it contains different components. Not only cinnamon, any food, if consumed as a smoke, can damage our lungs. It is not a solution to deal with the habit of smoking tobacco cigarettes. If that is the case, they should have done a trial and proved it in advance. But no scientific research has been done in this connection. It has not been tested and we do not know the constituents of the cinnamon smoke. This issue has come up regarding electronic cigarettes as well, and research has proven that, that smoke is also damaging to the lungs.”


He further said that sometimes it is difficult to gauge the nature of the damage caused by something until it is spread significantly, adding that it is not advisable to declare that cinnamon cigarettes are harmless only by analysing the results of a few people smoking it.


He added: “For example, in the 1900s, tobacco cigarettes were famous and fashionable. But, when millions started smoking in the mid-1900s, it became evident that it is harmful. So, without substantial testing and evidence, we cannot claim that cinnamon cigarettes are an alternative to help those smoking tobacco cigarettes.”


A recent statement issued by the SLMA said that any smoking product, herbal or otherwise, when used regularly, will cause significant harm to the lungs and that some substances, including cinnamon, that can be beneficial when ingested as a food, can be harmful when ingested as smoke or in vapour form.


The SLMA further stated that such a product that would be marketed to the general public should undergo stringent testing and trials before being approved, and that as far as it is aware, neither the NATA nor the National Medicines Regulatory Authority (NMRA) and the Department of Ayurveda have provided any approval or recognition for cinnamon cigarettes.


The SLMA alleged that in order to legalise products such as cinnamon cigarettes, the usual flawed and internationally misleading economic arguments are made, showing enormous financial benefits to countries that easily sway decision-makers in countries such as Sri Lanka, which are chronically short of cash.


It also stated: “The promotion of cinnamon cigarettes and the ongoing promotion and lobbying for cannabis should be viewed as two sides of the same coin, which are being circulated by entities that are intent on maintaining the habit of smoking and addiction in the population, with no other objective than profit. To make profits, it is the habit of smoking, not the product that is smoked, that needs to be promoted and maintained. When the psychological dependence of the habit of smoking is maintained in a population, any smoking product can be sold.”


According to those whom The Morning spoke to for this article, two main points were made against and for cinnamon cigarettes, i.e. health issues caused by smoke cannot be overlooked regardless of the substance that produces that smoke, and in a context where the production and sale of tobacco cigarettes is taking place freely, should it not receive more attention when it comes to eradicating the habit of tobacco smoking?


At the end of the day, embracing or not embracing anything is an individual right, and it is the authorities’ duty to guide the people and relevant institutions to make more appropriate decisions.

March 26, 2020 byTSM Web Desk No Comments
The National Water Supply and Drainage Board (NWSDB) today announced that water supply to several areas in Colombo will be interrupted until 10 pm tonight.

Over 95% of people develop antibodies due to Sinopharm, highly effective against Delta variant

July 20, 2021 byAazam Ameen No Comments
Research conducted by the Allergy, Immunology and Cell Biology Unit, Department of Immunology Molecular and Molecular Medicine of the Sri Jayewardenepura University has concluded that over 95% individ