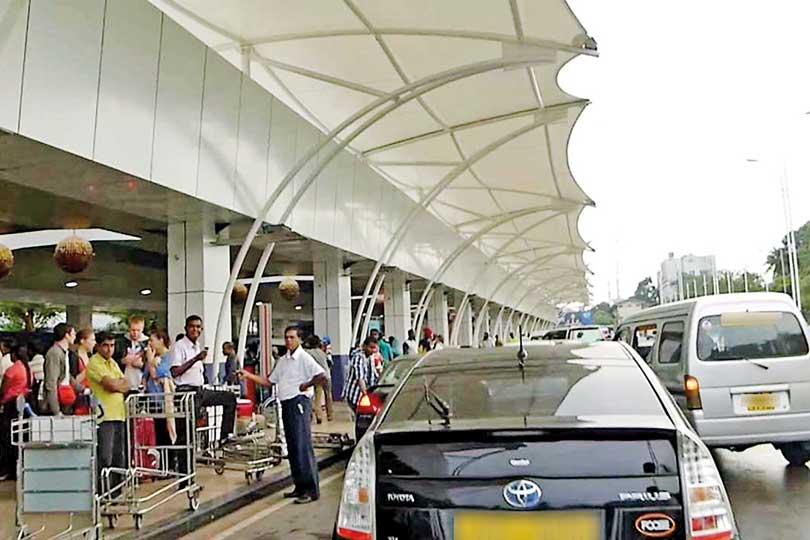 Touts and taxi drivers outside railway stations, bus stations, and even airports have been harassing tourists and local travellers alike for decades, and the situation appeared to be taking a turn for the worse at Bandaranaike International Airport (BIA) this month, with indications of a prevailing taxi mafia. Authorities, however, say that they have risen to the occasion and strict measures therefore are being taken to curtail this menace.

Two weeks ago, a video went viral on social media which showed a taxi driver and foreigner being severely harassed by a group of people.

The video starts off with a view from inside the vehicle and the driver fending off a group of confrontational men shouting at the driver. The driver’s door is opened and one of the men outside grabs something from the floor of the driver’s seat.

The driver can be heard saying: “Don’t do such things. I didn’t know you were here first,” after which the men outside can be heard responding, saying: “We told you this is our spot, but you ignored us.”

Thereafter, the cameraman, who sounded like a foreigner (considering his accent), can be heard shouting, defensively saying: “I’m a tourist and you make money off us.”

The video cuts shortly thereafter and it is unclear as to what happened to the driver and his tourist passenger.

In the light of this scenario, SriLankan Airlines Union Chief Janaka Pathirathna told The Sunday Morning that there has been an issue with regard to the transport services available to patrons of the airport in Katunayake and that a mafia had come into existence many years ago.

“These random clashes have been happening between outside taxi drivers and those who are from the area, but they are now being disclosed more and more because tourists and customers are tired of getting caught in the middle (of these clashes) and thus record these incidents and upload them (on social media),” he said.

He said the video appears to be showing a common scene taking place between taxi drivers in the airport locality. “There is usually a system of taking turns, especially at the arrival gate, by taxi drivers who frequent the airport on a daily basis,” Pathirathna said.

He said that the clashes usually occur when an outside driver steals a turn.

“Most of the time, outside taxi drivers come to make a drop at the departure gate and then hang around at the arrival gate. This irks the taxi drivers who have been waiting for their turn,” he noted.

When The Sunday Morning inquired as to why Pathirathna was distinguishing such drivers as “outside drivers”, he revealed that there was a drivers’ association at BIA.

“There has been a drivers’ association registered with the airport services for decades now. I’m unaware of whether this so-called taxi mafia is connected to that association, but we have been urging authorities, even at the ministry level, to address this issue as it is damaging the image of our country as many foreigners are harassed by the unruly behaviour of such drivers,” Pathirathna said.

Airport and Aviation Services (Sri Lanka) Ltd. (AASL) Vice Chairman Rajeewasiri Sooriyaarachchi, speaking to The Sunday Morning, was able to shed some light on the situation with regard to the taxi services available at BIA.

“At present, there are around four associations and companies registered with the Airport and Aviation Services to provide transport facilities to both local and foreign tourists. We’ve had these registered associations for many years now,” he said.

He said that he too heard of a mafia attempting to monopolise taxi services, adding: “We have been told that there is a mafia operating in the vicinity, trying to control and profit from the taxi services. But we have warned all drivers, including the association registered with us, that such behaviour will not be tolerated.”

He said that he was informed that the incident in the video had taken place in Negombo and not in the premises of the airport.

“I was made aware that authorities had uncovered that this particular incident had taken place at a hotel in the Negombo town area and not at the airport. Nevertheless, steps are being taken by authorities to address this issue,” he observed.

He also said that one such measure would be to segregate the traffic at the airport. “The traffic entering and exiting happens simultaneously, just minutes apart. We will look to segregate the incoming traffic from those who take hires out of the airport. This way, vehicles that enter to drop customers can idle all they want, but would not be able to intrude from the arrival gate and steal away prospective customers of the taxis waiting in turns there (the arrival gate),” he explained.

At a safe distance

The video went viral that week and has been doing its rounds on social media, grabbing a lot of attention of the public, with many quarters even coming out with anecdotes of being harassed at the airport.

Sunil Sampath (32), a taxi driver employed with a prominent taxi company, said that he had been shouted at and verbally abused on multiple occasions when picking up passengers at the airport.

“We get airport pickups quite often, but now I’m increasingly hesitant to accept such hires due to the issues I have to face when I get to the arrival gate,” he noted.

He said that most customers sought taxi services through mobile apps due to the inflated rates charged by drivers operating at the airport itself.

“Many foreigners are aware of the situation on the ground when they land, so they use apps to hire drivers instead of going out of the arrival gate and picking one from there. Many of the drivers who station themselves at the airport don’t use meters, or they tamper with the meters to charge inflated rates that are twice or thrice our company rates,” Sampath said.

Phillip (29), a traveller who had arrived in the island in December to celebrate the dawn of the New Year in Sri Lanka, told The Sunday Morning that his elder brother, who had visited Sri Lanka a few years prior, had warned him of scams run by taxi drivers in Sri Lanka, especially at the airport.

“Because of my brother’s warning, my friends and I booked a vehicle via an app soon after we landed. We were glad we did that because as we exited the arrival lounge, we were bombarded with proposals to have us dropped in Colombo or Negombo by various individuals,” Phillip said, noting that his group was fortunate enough to not be harassed like the traveller in the viral video.

AASL Chairman Maj. Gen. (Retd.) G.A. Chandrasiri said the authorities have taken prompt action to arrest those shown in the viral video. He said that a total of nine individuals have been arrested.

“This incident took place outside a hotel in Negombo. I spoke with the Secretary of Defence and the IGP (Inspector General of Police). The whole lot was arrested soon after and produced before courts,” he said.

Chandrasiri noted that in fact there was some sort of taxi mafia and that it had been allowed to grow in the recent years.

“In the last four-and-a-half years, this taxi mafia had been allowed to grow. Nothing had been done to curtail their activities,” he said, adding that immediate steps are being taken in the long as well as short terms to ensure this issue is resolved and the country’s image is safeguarded.

“As an immediate step to resolve the issue, we have toughened up security. An additional 50 police officers have been deployed at the airport. In the long run, we are gathering intelligence to eradicate this mafia menace as well as taking measures to make the transport procedures at the airport smoother and more efficient,” Chandrasiri said, further noting that within the next two months, it would be regularised and a “clean” airport will be functioning.

Most of the time, outside taxi drivers come to make a drop at the departure gate and then hang around at the arrival gate. This irks the taxi drivers who have been waiting for their turnSriLankan Airlines Union Chief Janaka Pathirathna
Many of the drivers who station themselves at the airport don’t use meters, or they tamper with the meters to charge inflated rates that are twice or thrice our company ratesSunil Sampath, a taxi driver employed with a prominent taxi company
Tweet
Share
Pin
Share2K
2K Shares

Sunny Side Up: MP tests positive

June 12, 2021 byNews Admin No Comments
Governing party MP Kader Masthan had tested positive for Covid-19 after a rapid antigen test was conducted on him.

Solution or another problem?

May 27, 2019 bythemorninglk No Comments
A month after the Easter Sunday terror attacks, a majority of Sri Lankan lawmakers are pushing for reform of the existing personal laws and urging to bring the entire legal system into a uniform syste