Biden calls for healing as he celebrates ‘clear’ victory over Trump

November 9, 2020 by Charindra No Comments

US President-Elect Joe Biden celebrated his win over Donald Trump as “clear” and “convincing” in a hometown victory speech as he vowed to waste no time cracking down on the Covid-19 pandemic and called on Americans to set aside their differences once and for all. 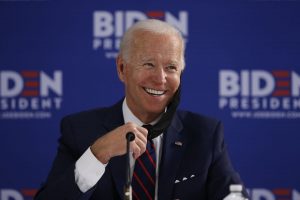 Biden’s speech came roughly eight hours after he was declared winner of the US election, thanks in large part to Midwestern and suburban voters who helped him deny Trump four more years in the White House. He won both the electoral college and the popular vote, and is the first presidential candidate in history to surpass 74 million votes.

At 77, Biden is the oldest person ever elected US President.

Hailing the record-breaking turnout, Biden promised to be a president for all Americans, no matter if they voted for him or not.

Combatting Covid-19 was a core message in Biden’s campaign. He announced that, starting today (9), he plans to assemble a task force of scientists and experts who will help him confront the crisis as soon as he’s inaugurated in January.

Biden was introduced by Vice President-Elect Kamala Harris, who makes history as the first woman and the first person of colour elected to the nation’s second-highest office. Harris said that, while she may be the first female Vice President, she won’t be the last.

Trump’s loss adds his name to a short list of one-term presidents. The last incumbent president to lose his re-election bid was Republican George H.W. Bush in 1992.

April 22, 2021 byNews Admin No Comments
The Mrs World Inc. said that it had both received and accepted Mrs World 2020 Caroline Jurie’s relinquishing of her title as Mrs World 2020, making Mrs Ireland the new holder of the coveted title.

February 17, 2021 byMihi Perera No Comments
A factory that manufactures packets of peanuts has been sealed by the Peliyagoda Police for altering the expiry dates of 118,000 packets worth Rs.30 million, Police Spokesman DIG Ajith Rohana said tod