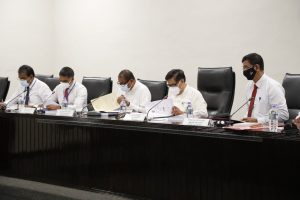 The Bill to amend the National Minimum Wage for Private Sector Employees in Sri Lanka was discussed at the Ministerial Consultative Committee on Labour chaired by the Minister of Labour Nimal Siripala de Silva today (07).

The committee observed that this Bill does not fall under any prohibition or restriction imposed by the 13th Amendment to the Constitution and that the Attorney General’s statutory certification has been referred attesting that it is in accordance with the Constitution. Thus, the Committee drew its attention towards referring the Bill to the House for approval.

State Minister Piyankara Jayaratne, Members of Parliament Jagath Pushpakumara, Rajika Wickramasinghe, Kokila Harshani Gunawardena, Secretary to the Ministry of Labour and other public officials were also present at this Committee.

Will the parliamentary majority remain valid in steering the nation forward?