– Is the Government aware it has gazetted 527 SOEs? 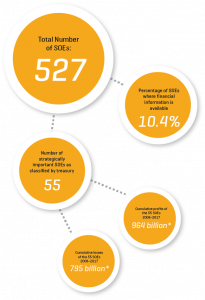 Unveiling an invisibility cloak of the State was the first task I did as a fresh graduate. Behind 55 strategic state-owned enterprises (SOEs) identified by the Ministry of Finance (MoF) lies another 450+ SOEs making their contribution to the “coordination problem”.

Even at face value, it seems unlikely that a small country like Sri Lanka needs the government to run a pool of SOEs as large as this. Interestingly, the MoF doesn’t have an account of all its SOEs, with the annual report only mentioning that there are 400+ SOEs. However, there are at least 527 SOEs, subsidiaries, and sub-subsidiaries gazetted. To be specific, the 527 SOEs can be broken down to 424 principals, 84 subsidiaries, and 19 sub-subsidiaries.

Of the 400+ SOEs that the Government is aware of, the Department of Public Enterprises tracks the profits and losses of only 55 SOEs, which they have identified as “strategic”.
This raises two questions: Why doesn’t the Government know the number of enterprises it runs? Anyone running a business should, at the very least, know the number of organisations it is in charge of. And why does the MoF only track 55 SOEs? What are the losses that come from the remaining 450?

Let’s take the Ministry of Power and Energy and Business Development for example. The ministry’s losses add up to a cumulative net loss of Rs. 363,945 million during the past 11 years. The ministry governs four principal SOEs, six subsidiary SOEs, and 12 sub-subsidiary SOEs adding upto a total of 22 bodies.

When one further explores these subsidiaries, it is quite logical to ponder the rationale for these categorisations. For instance, the Ceylon Electricity Board (CEB) has two subsidiaries under it. The first subsidiary, Lanka Electricity Company (LECO), has three sub-subsidiaries: LTL Transformers, LTL Energy, and LTL Galvanizers. The second subsidiary, LTL Holdings (Pvt.), has another sub-subsidiary: LTL Energy (Pvt.). Is it any wonder that we have erratic power supply? A convenient way to track all these entities would be to establish all of them under one subsidiary – LTL Holdings.

It is time we question the logic of establishing so many SOEs, given that their profits and losses are not tracked and a majority does not even publish annual reports. When the losses incurred by these entities are added to the equation, it is clear that there is a large-scale mismanagement taking place.

The multiple layers of incorporation (principal, subsidiary, and subsidiary bodies) enhance the divisibility of responsibilities. Furthermore, the problem with having too many entities makes it hard for them to be monitored. Since SOEs are governed by the state, the debt burden is weighed heavily on the government and then transferred to the taxpayer.

Moving beyond the profits and losses of these enterprises, an equally shocking fact is that out of the 527 SOEs that have been gazetted to date, information on the purpose (classification as commercial and non-commercial entities) of 284 SOEs is not freely available and cannot be found from government sources.
Can these 527 enterprises be utilised or does a majority need to be shut down because of their losses? The Government cannot afford to keep bailing out its mismanaged enterprises – the fiscal space simply does not exist.

The first step to addressing the problem of SOEs is to figure out the number of entities the state governs. A biannual census of SOE conducted by the Department of Census and Statistics with detailed reports (a current requirement fulfilled only by 55 SOEs) on every SOE is a must. It is only from here, when the Government has an idea of the extent of the problem, that we can move into questions of improving accountability and introducing better governance structures.

The question remains: When the Government is unaware of the number of entities it is responsible for, why should citizens pay for their loss-making, inefficient, and institutional excess?
You can access Advocata’s report “State of State Enterprises – 2019” at www.advocata.org.


Dilshani Ranawaka is a Research Executive at the Advocata Institute whose main research areas are public finance, behavioural economics and labour economics. She can be contacted at dilshani@advocata.org or @dilshani_n on twitter. Advocata is an independent policy think tank based in Colombo, Sri Lanka which conducts research, provides commentary, and holds events to promote sound policy ideas compatible with a free society in Sri Lanka

October 27, 2021 byNews Admin No Comments
There may be a tendency to be lured into investing in the stock exchange due to the recent “bull run”, among individuals, particularly youth, who are not sufficiently knowledgeable about the stock exc

May 6, 2020 byCharindra No Comments
Considering the prolonged impact of Covid-19 on retail sector businesses, two leading shopping complexes in Sri Lanka have announced a “rental-free” policy for their tenants.