There will be possible a black-out of television live coverage of the long cricket series, to be played across all three formats, in the West Indies starting on 3 March with the T20Is, The Morning Sports learnt yesterday (22). 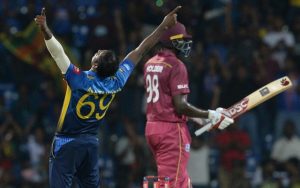 There is going to be no live coverage of West Indies series in Sri Lanka?

The London-based Pitch International is reportedly has broadcasting rights of West Indies Cricket (WIC), which became WIC’s exclusive commercial consultant and sponsorship sales agency in September 2015 on a multi-year deal.

Yet it was learnt yesterday, after contacting possible local bidders for the series, that there is no local channel that is ready to telecast the series here in Sri Lanka.

The Sri Lanka Rupavahini Corporation (SLRC) indicated they were having discussions with the “relevant parties” and they have “not yet confirmed” and “the decision is pending” whether they are able to provide live coverage of the series.

Another private television channel that is also considered a possible telecaster of the series indicated they were also not keen on having live coverage in the island.

The series involves three T20I matches, three ODIs, and two Tests respectively, to be played from 3 March to 2 April. Sri Lanka’s limited-over squad is leaving for the West Indies today (23).

Reports emerging from the West Indies end also suggested there is a likelihood of no live coverage of the series in the Asian region.

The company Pitch has not started its negotiations with the Asian relaying broadcasters yet, it is learnt.

The major glitch in Asian live coverage of the series is the time difference (see details below).

And the other major hindrance for the poor appeal of prospective Asian bidders for the series is poor standard the Sri Lanka team is showing at present which has caused a drop in their popularity and television audience appeal.

The Sri Lanka ODI and T20I squad is to tour West Indies today, Tuesday (23) while their Test squad is reportedly taking wings to the Caribbean islands on 5 March.

The above scenarios indicate that there is likelihood that the local cricket fans have a blackout of live television coverage of the one-month-long West Indies series. They may have to depend on YouTube live coverage which WIC is likely to make available free of charge worldwide.

* The venue of the series is Antigua, which is nine-and-half hours behind Sri Lanka time

* The time situation will apply to the other two T20Is as well, to be played on 5 and 7 March

* The first two ODIs will be day games, to be played on 10 and 12 March. They will start at 7 p.m. Sri Lanka time on the same day and can go on until possibly 2 a.m. the next day

* The third ODI will be a day-nighter and will start at 11 p.m. in Sri Lanka the same night. But it can go on till 6 a.m. the following day morning

* The two Tests are scheduled to start at 7.30 p.m. Sri Lanka time each day going on till possibly 2.30 a.m. the following day

December 24, 2020 byNethmi Liyanapathirana No Comments
“Suwen Siteemata Saviyak”, a programme to help live healthily during the pandemic, organised by the Department of Sports Development and Colombo District Secretariat, was held at various places..