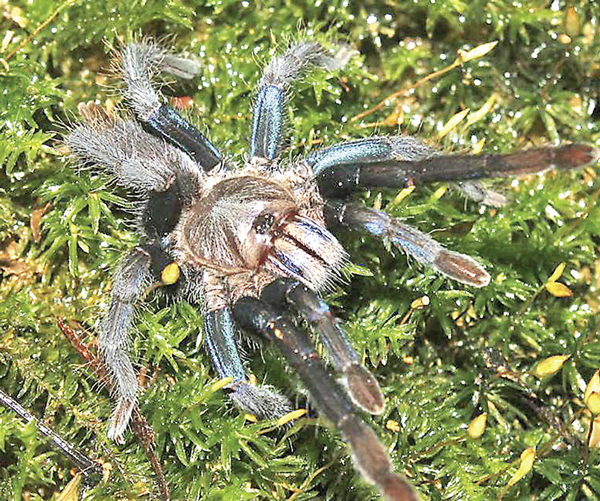 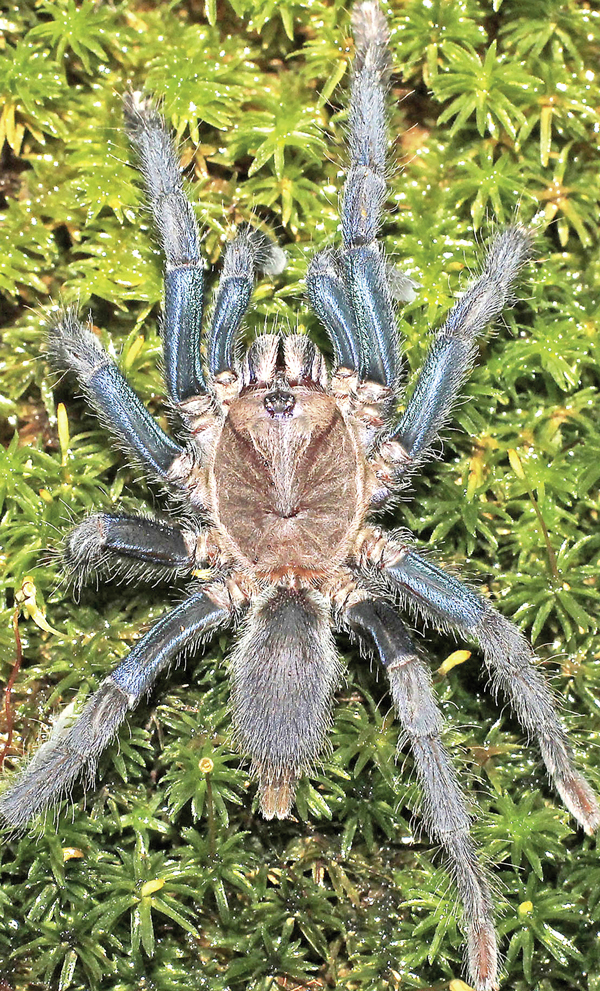 “Another from Sri Lanka, after 126 years; Chilobrachys jonitriantisvansicklei Sp. nov. (Araneae:Theraphosidae) from a fragmented forest patch in the wet zone of Sri Lanka” reads the title of the paper published in the Journal of the British Tarantula Society in July this year.

The news of something that should bring great joy and be boasted about to the rest of the world is only being circulated to alert us on the ugly truth of illegal trade.

The need for more regulations to protect animals is a huge problem in Sri Lanka, and with the introduction of this new exotic species and the fear of it being misused, attention is yet again given to this persistent issue. Undoubtedly, this new beautiful species of tarantula must be protected.

The introduction of the study reads: “The new species of Chilobrachys was collected from a fragmented rainforest patch located in the Kalutara District, Western Province of Sri Lanka. The specimens were collected from burrows on a soil embankment covered with bryophytes along the road, with a clear tubular extension made up of soil and other debris.

Interestingly, the majority of the known members of the genus Chilobrachys are shades of brown, black, or grey and lack vibrant colours or iridescent sheens on their dorsal surface.

The collected specimen, on the other hand, has a metallic turquoise-blue sheen on all four legs and also an iridescent sheen on the carapace and abdomen.

As such, the collected specimen differs greatly from the other members of the genus, including C. nitelinus, thereby warranting its taxonomy description as a new species.

The discovery was part of an ongoing, islandwide study on the mygalomorph spiders in Sri Lanka. Here, we describe the second species of Chilobrachys from Sri Lanka after 126 years.”

The Sunday Morning Brunch was fortunate to be able to get through to Ranil Nanayakkara and Amila Sumanapala, two of the three authors of the aforementioned paper.

Amila Sumanapala is a field biologist whose research focuses mainly on taxonomy, biogeography, habitat preferences, natural history, and conservation of insects. Ranil Nanayakkara is a renowned researcher on spiders. 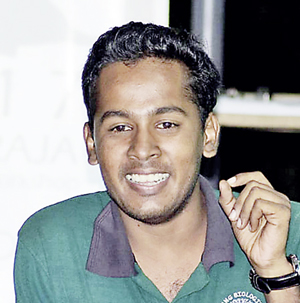 He is currently an environment officer of the Ecosystem Conservation and Management Project of the Ministry of Mahaweli Development and Environment as well as a regional member of the IUCN SSC Sirenia Specialist Group.

“We first encountered this species way back in 2012 and throughout 2015 and 2016, we collected specimen to prove the findings. It is not a newly evolved species of spiders, but a kind that for some reason has been overlooked in the past.

They are found in the wetlands of the Western Province and in the Kalutara District.

That is all I will disclose on the location as I fear of the excessive attention that will be brought to this place and all the negative effects of publicity this species will face. We are trying our best to keep it away from mainstream media and have only mentioned it in the study for scientific reasons,” explained Sumanapala.

Speaking to us, Nanayakkara explained the dangers faced by these spiders on a daily basis.

“The finding of this new tarantula may not be very well known in Sri Lanka, but it is globally known.

In fact, National Geographic did a feature on it as well. In Sri Lanka, it has not caught enough attention yet.”

There is a huge demand for exotic animals, especially for beautiful tarantulas, in European countries, the US, and certain parts of South Asia.

Most of the dealers or buyers come down to our country as tourists and take back with them various species of reptiles, including a variety of lizards and spiders, especially creatures that can be easily transported out of the country. Most of the tour guides are even unaware of this happening as they lack the training to identify such illegal dealers and the trade itself.

The guides also need to be taught about the legal aspects associated with being a part of illegal trade activities because these dealers pose the greatest threat to these animals.

The perfect example for this is when a species of spider endemic to Sri Lanka, which is found only in the Haragama area and was thought to be extinct at the time, was later found in Europe – specifically in Germany. Around 3,000-4,000 were found, including those kept for breeding purposes. This caused a lot of dispute as the Sri Lankan Government had not authorised international trade for this species. However, this particular type of spider was brought back to Sri Lanka and reintroduced to their natural habitat.

The recently discovered blue tarantula is even more threatened as its spreading capabilities are limited. They are, as of now, only found in one area.

They breed very close to tea plantations and are found in very small fragments in the West up to date. “We have conducted islandwide surveys on spiders and haven’t been successful in finding them elsewhere. They clearly have a preferred breeding habitat.”

We asked him to help us list down the potential dangers faced by these spiders on a daily basis and the biggest threats to their existence, and they shared:

Preferred habitats are being eradicated – most often, smaller species like spiders are overlooked when picking areas to develop.

Ad hoc development projects are actually a huge threat to a lot of species. There has to be a procedure where experts need to go in and survey if there are any threatened species living in that area.

Being in an island, we are globally known to be a biodiverse country. We must have easily lost 300-400 species due to unplanned resettlement, urban development projects, products of commerce, etc.

Poor at dispersal – when a female with an egg sack is found in one place, the next one will only be found a couple of feet away. They don’t spread in kilometres like most spiders we see within a domestic atmosphere. We must protect this particular area in which they are found.

Villagers must be educated – most villagers living around believe that these spiders are venomous.

Any spider that is big and has fur is immediately thought to be deadly, so they make sure they kill any they encounter. In reality, this spider is not deadly for a human; it will only cause some sort of swelling or give you a fever.

Their toxicity is only able to increase a physical ailment you already have, and the effect depends from person to person. If we are able to raise awareness only among the people living in the area, it will reduce the threat caused to this species.

Publicity – because of this threat of illegal trade, publicity is not good for a new species.

Former Sri Lanka Customs Deputy Director Samantha Gunasekara, who was also among those who initiated and led the world’s first biodiversity protection unit (BPU) in Sri Lanka which monitors and controls biological materials and wildlife trade at borders, shared his insights with The Sunday Morning Brunch. His experience on wildlife detection, investigation, and prosecution has greatly helped build this model. It is also the first of its kind in the world.

“I believe it is important to start protecting these animals in the wild without waiting till we catch them ready to be exported. Collecting in the wild is what should be stopped.”

Annually, international wildlife trade is estimated to be worth billions of dollars and includes hundreds of millions of plant and animal specimens.

The level of exploitation of some animal and plant species are high and the trade in them, together with other factors such as habitat loss, is capable of heavily depleting their populations and even bringing some species towards extinction. Many wildlife species in the trade are not endangered, but the existence of an agreement to ensure the sustainability of the trade is important in order to safeguard these resources for the future.

Why Kombucha, how kombucha?

January 12, 2021 byRusiru Keppetipola No Comments
It all started with a friend attempting to explain what kombucha tastes like to their very Sri Lankan palate, describing it as “something in between beer and vinegar”, and weirdly enough we were..

October 5, 2021 byNews Admin No Comments
The Moulin Rouge conjures up a gallery of images of scantily-dressed, long-legged beauties with their glitzy, sequined bodies and ostrich plumes “growing” out of their heads, contorting on stage in th