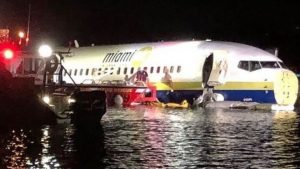 A passenger plane has slid off a runway in the US state of Florida, ending up in a river after landing during a thunderstorm.

None of the 143 people on board the Boeing 737 were seriously hurt.

The chartered aircraft, operated by Miami Air International, had flown from Guantanamo Bay in Cuba to a military base in city of Jacksonville .

Passengers say it landed heavily during the storm, skidding into the nearby St John’s River.

At least 20 people were treated for minor injuries.

Passenger Cheryl Bormann told the CNN TV network of the “terrifying” moment the plane slid off the runway late on Friday.

“The plane literally hit the ground and bounced – it was clear the pilot did not have total control of the plane, it bounced again,” she said.

“We were in the water. We couldn’t tell where we were, whether it was a river or an ocean,” she said, adding that she could smell jet fuel leaking into the river. (BBC)

July 25, 2019 byRandev No Comments
US President Donald Trump's claim that he was "totally exonerated" by special counsel Robert Mueller was rejected by Mueller in a hearing on Wednesday.