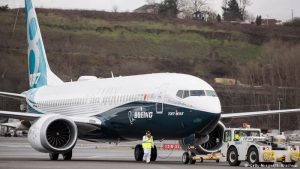 Boeing has grounded its entire global fleet of 737 Max aircraft after investigators uncovered new evidence at the scene of the fatal Ethiopian Airlines crash.

The US plane-maker said it would suspend all 371 of the aircraft.

The FAA had previously held out while many countries banned the aircraft.

The crash on Sunday in Addis Ababa killed 157 people.

It was the second fatal Max 8 disaster in five months after one crashed over Indonesia in October, claiming 189 lives. BBC

July 8, 2019 byRandev No Comments
Britain’s seizure of an Iranian oil tanker off the coast of Gibraltar is unacceptable and tantamount to piracy, Defense Minister Amir Hatami has claimed.

January 29, 2020 byTSM Web Desk No Comments
A powerful 7.7-magnitude earthquake has struck in the Caribbean, prompting brief tsunami warnings and office evacuations as far away as Florida.