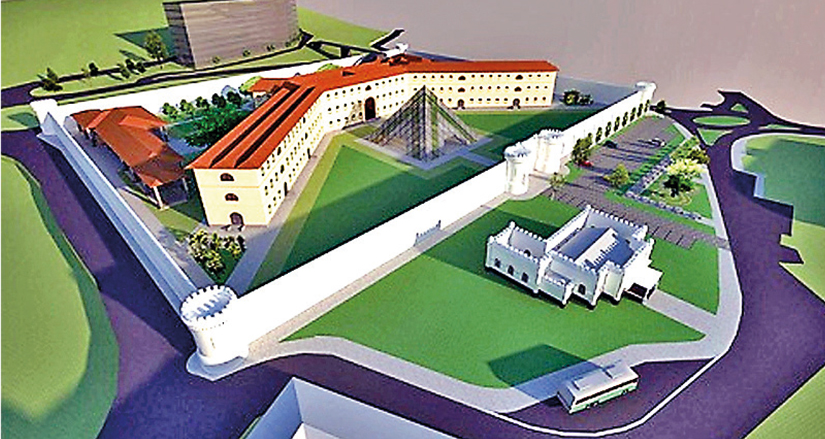 Located in the very heart of Kandy, the Bogambara Prison, one of the city’s biggest landmarks, is currently being repurposed into a cultural park and tourism centre.

The ancient prison complex hosted Prime Minister Ranil Wickremesinghe on Saturday (24th) at a ceremony to mark the end of the final phase of the Bogambara Prison Development Project and inaugurate its second phase, following which the third and final phases would begin.

The project is being conducted under the Government’s initiative to develop Kandy – a UNESCO World Heritage City – into a tourist hub.

The repurposed prison is set to favourably impact the people currently living in the city through the creation of new employment opportunities and the enhancement of trade, tourism, and investment opportunities. The project includes the development of a cultural centre, open-air theatre, studios for traditional arts and craft, a tourist information centre, and multi recreational areas. The development also includes plans for a shopping complex as well as a museum promoting the prison’s history.

The project was implemented by the Ministries of Development Strategies and International Trade and Megapolis and Western Development, Urban Development Authority, Central Engineering Consultancy Bureau, Central Engineering Services (Pvt.) Ltd., and the Board of Investment of Sri Lanka (BOI). The development will also be carried out under the guidance and supervision of the Department of Archaeology in order to preserve the history and culture of the premises.

In 2017, it was estimated in the Bogambara Project proposal that the initial investment for conservation and redevelopment would amount to approximately $ 7-10 million. Due to a lack of funding, the Government hoped to raise funds from countries such as Britain, the Netherlands, India, and other major donor counties with strong historical and religious links to Kandy.

The Government plans to make Bogambara a “must-see” destination for both local and foreign visitors of the historic city, and use entrance fees earnings and earnings from other facilities in the proposed complex to ensure a continuous revenue stream to enable upkeep and future developments within.

The prison was Sri Lanka’s second largest prison spanning around 13 acres, second only to the Welikada Prison in Colombo. Its 92,000-square foot main building is three storeys high and houses 382 cells, and is accompanied by a 9,000-square foot prison medical building to its west.

In addition to renovating these two buildings, the development project looks to build two more buildings in front of the main prison.

First built in 1876 under the instructions of the British Ceylon Government and the Inspector General of Prisons and Police at the time, N. R. Saunders, the maximum-security prison housed serious offenders and prisoners on death row. The prison was fashioned after the French Bastille fortress, which explains its medieval look.

The prison complex is one of the oldest buildings in the heritage city, and is considered a rich archaeological landmark. Bogambara was also one of two prisons in Sri Lanka which saw the implementation of the death penalty, and so was equipped with gallows.

In order to improve prison conditions and expand the prison network, the Government decided to shutdown the prison in 2013, and transferred all the prisoners to a new complex in Pallekele.

After permanently closing its doors on 1 January 2014, the prison property and equipment were handed over to former President Mahinda Rajapaksa in order to be used for commercial and viewing purposes as a historical building.

In April 2016, Minister Lakshman Kiriella proposed that the prison complex be converted into a luxury hotel. He also recommended the construction of underground tunnels in and around Kandy to ease traffic congestion. One such tunnel would be built between Bogambara and Getambe, Peradeniya.

In September 2016, the Cabinet approved a proposal presented by the Prime Minister to assign an internationally reputed agency to redevelop the Bogambara Prison site as a tourist attraction while preserving its historical value.

The design pertaining to the redevelopment of the prison was first approved on 9 December 2016 by the Ministry of National Policies and Economic Affairs.

They urged the Government to preserve and use the ancient prison complex as a national museum and cultural centre that would then serve as a major resource for the advancement of Kandy’s heritage. They also put forth a proposal prepared by a group of scholars, experts, and professionals to advocate for the conservation and redevelopment of the main building that occupies almost six acres and the use of the remaining seven acres of Bogambara for ancillary facilities.

One of the main goals of this was to create a modern, world-class museum in Kandy that would act as a conduit to the past. Following this, they proposed the building be used as a Kandyan cultural centre where Kandyan arts and crafts can be displayed, and an auditorium, performing arts facility, art gallery, Ayurveda spa, food court, and other ancillary facilities that would attract local and foreign visitors be built.

In June 2019, the BOI called a Request for Proposals (RFPs) to develop the Bogambara Prison into a four or five-star hotel. They hoped to attract both foreign and local investors on a design, build, finance, and operate model, offering the land on a lease of up to 50 years.

“The BOI anticipated interest from investors in creating a landmark and a vibrant destination in the heart of Kandy which brings the city’s heritage to centre stage,” stated the RFP document.
The BOI stated that the objective of the RFP process was to select an appropriate developer/investor to utilise the prime plot of land and provide an opportunity to create a unique development/hotel complex to enhance the attractiveness of the city fostering cross-functionality, and environmentally friendly and sustainable development methods and building practices while protecting the heritage and culture of the premises.

According to a press release sent by the BOI, the Ministry of Development Strategies and International Trade hopes to meet the Japanese Ambassador to raise more funds for the Bogambara Prison Project.

October 14, 2019 byCharindra No Comments
Cigarette smuggling must be tackled through effective regulation while keeping tax rates high in order to reduce smoking prevalence to under 10%, argues Institute of Policy Studies of Sri Lanka (IPS).