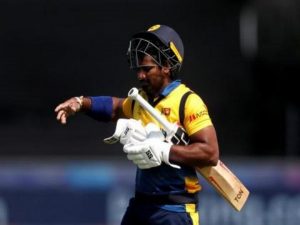 * Players made to eat the humble pie

* SLC, which delayed the process, is now made to dance to the others’ tunes

The last-ditch attempt to come to a settlement and sign the annual player contracts had to be put off until the end of the England white-ball series yesterday (7) when representatives from both parties, Sri Lanka Cricket (SLC) and players, met at Taj Samudra hotel in Colombo.

Top-brass officials from SLC, including President Shammi Silva and one of its Vice Presidents Jayanth Dharmadasa, have reportedly met with Sri Lanka ODI and T20I Captain Kusal Perera and ODI Vice Captain Kusal Mendis yesterday in a bid to sort out the long-dragging player contract dispute with less than two days to go for the team’s departure to England.

After much deliberation, the board officials have allegedly told the player representatives in no uncertain terms that “if you don’t sign, we’ll then send a second-string side to England.” At around three in the afternoon yesterday, the two parties had come to a settlement to first get along with the England tour and then sort out the annual contract dispute later.

As a result, the players have agreed to sign the England tour with some amendments into the tour contract. 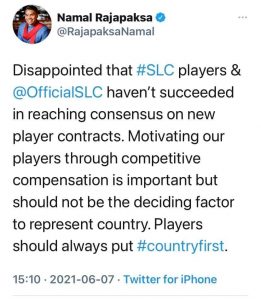 After the new SLC committee was elected by the stakeholders of the game on the 20 May elections, the Silva-led administration has now been evidently reduced to do only paper work with all major decisions being taken by outside parties, mainly the Technical Committee (TC) under Aravinda de Silva and the National Sports Council (NSC), headed by Mahela Jayawardene.

“They recommend cricket director Tom Moody, they revise the player contract schemes, they influence team selection, and now they try to put up a Governing Council to the LPL (Lanka Premier League) as well. Their intention is their own benefit. But when things go wrong, they won’t take the responsibility. They will wash their hands off and we (SLC) and the honourable minister (Sports Minister Namal Rajapaksa) will be left to take the blame,” a highly-placed SLC source told the Morning Sports on the condition of anonymity.

On the other hand, SLC suffers this eventuality because f their undue dependence on the political higher-us of the country. The contract issue had been a long overdue one to be sorted out, in fact dragging on from late last year and the former SLC ex-co was dissolved only in April. By then the Sri Lanka team had played at least three series after their previous contracts expired. They put off, for one reason or the other, the annual contract issue further and further until it reached a boiling point this week.

The TC and NSC

The Technical Committee and the National Sports Council –appointed by the minister and, in TC’s case, ratified by SLC– taking all the major decisions in national cricket is a dangerous precedent. It is nothing but subverting the entire administrative structure. Whether everyone agrees or not, it is the people (through of the minister) and the clubs (through SLC) that should govern the sport. Delegating important and sensitive powers to bodies that are not directly responsible to either the clubs or the public will beget problems in future where nobody could be held responsible. This situation becomes more dangerous when those “irresponsible” bodies are driven by not any national interest, but by their own mundane, financial interests.

There were days when the national cricketers asked them to be exempted from national duty so that they can play in franchise T20 leagues abroad, like the Indian Premier League (IPL). And they were not said ‘no’ to, even by the political hierarchy of the country then. The players were so powerful. There had been disagreement in earlier occasions too when the player contracts were negotiated. But the players used to have the upper hand in those negotiations. The reason: They were consistently winning in the middle; Sri Lanka had always been among the best in the world.

But the tables have turned now. Nowadays it is not a very proud proposition to say that you are playing for Sri Lanka. The reason: the players are losing continuously and they even lose to Bangladesh. Sri Lanka is languishing in the bottom of the table in every single format of the game. Their indiscipline and lack of commitment has become an open secret. These have made the players the losers in the contract negotiations too. The board reverting to the players saying “we don’t want you and we’re sending a second-string side if you don’t sign” is a kind of stance the local board had maintained perhaps only during the 1982 infamous Rebel Tour period. From the players’ side, they were not only being made to eat humble pie, but they themselves have had just deserts too.

Players fixing matches and getting punished, national players getting into the habit of taking heroin, allegations of players having sex with women inside the dressing room, the team losing not only to Bangladesh but Afghanistan, and Sri Lanka having to qualify for the World Cup… all these have been totally new disasters the ardent cricket fan here has had to witness. Now there is another one: the cricket board has asked the players to bugger off!

When can our passionate cricket fan get to hear something that will sooth their hearts and minds?