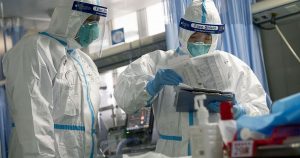 The deadly Wuhan coronavirus is threatening to spiral out of control with 27 countries affected so far, including Sri Lanka. The World Health Organisation (WHO), under pressure over its delayed response, has declared the rapid spread of the deadly virus a public health emergency of international concern.

As of Friday (31), according to official statistics, 12,000 were infected and 259 deaths had been reported in China. Since the virus does not show symptoms for up to 14 days, health officials suspect the actual infected number could be over 100,000.

The global economic impact caused by coronavirus is massive and Sri Lanka is unlikely to be spared. China is one of the world’s biggest manufacturers and thousands of its factories now remain shut and inactive as entire cities surrounding the Wuhan epicentre remain in lockdown.

According to Chinese authorities, around 60 million people, that’s three times the population of Sri Lanka, are now effectively in quarantine in Wuhan and other cities, completely isolated from the rest of civilisation. With factories grinding to a halt, China’s export receipts will take an unprecedented hit, seriously affecting Asia’s economic powerhouse and posing the biggest challenge yet for the ruling Communist Party.

As a result of its economic boom, China has become the world’s largest market for outbound travel. In 2018, a staggering 150 million Chinese nationals travelled overseas on leisure trips. The country is also the world’s biggest tourism spender, accounting for $ 277 billion or 16% of the world’s total $ 1.7 trillion international tourism spending, as per the UN World Tourism Organisation (UNWTO).

Of the total Chinese outbound market, Sri Lanka attracts just around 330,000 visitors, which amounts to a mere 0.3%. Yet, this is equivalent to around 15% of total tourist arrivals here as per 2018 data, which remains the peak year for tourism arrivals, making China the second biggest source market for Sri Lankan tourism.

The bad news is that with almost all major airlines suspending operations to China and the Chinese Government itself issuing a ban on non-essential foreign travel for its nationals, Sri Lanka’s tourism industry, which is just recovering from the Easter Sunday calamity, will face yet another monumental challenge.

The knock on effects could be even more pronounced as many tourists from the Americas and the Asia Pacific region will hesitate to travel as they would have to transit in Hong Kong, Singapore, Kuala Lumpur, or Bangkok – all of which have reported coronavirus cases.

To make matters worse, after one case was identified as positive in Sri Lanka, the UK, which is the third biggest source market for Sri Lanka, issued a travel advisory cautioning citizens about the threat. Sri Lanka is currently in the peak winter season and it is probably the worst possible time for another crisis even though this time, not of its own making.

Following the unprecedented tax cuts that resulted in an estimated cumulative revenue loss of around Rs. 600 billion and even resulting in the three biggest global rating agencies – Fitch, Moody’s, and Standard & Poor’s – downgrading Sri Lanka’s credit rating to negative from stable, the Government was no doubt banking on the tourism cash cow to get it out of the woods, but that strategy is beginning to look ominously problematic.

In addition, with hefty loan repayments due later this year, the Government was banking on more Chinese credit to tide over the payments. However, with China now having to face a severe crisis of its own, its ability to dole out cash will no doubt be compromised.

In 2003, the SARS pandemic cut the Chinese GDP growth rate which was firing at around 10% by 2%. The effect of that lasted for many years. In monetary terms, the economic impact was estimated at around $ 40 billion.

So far, the economic impact of coronavirus has put all that in the shadows. As at now, the International Monetary Fund (IMF) estimates the economic damage to the Chinese economy at around $ 135 billion and counting with each passing minute. To put it into context, that’s about the value of 100 Colombo Port Cities.

Although China has massive financial resources, the current crisis will no doubt seriously affect the country’s global economic clout and lending power. Having banked on Chinese credit to overcome its own headaches, Sri Lanka may well end up falling victim to the coronavirus economic crisis; so it would make sense to look elsewhere for financial assistance to overcome loan repayments at least in the short term.

The spread of the virus is nowhere near containment. Economic analysts predict that China’s current growth rate of 6% will come down to 4% as a result of the economic repercussions of coronavirus.

It will have a huge effect on the global economy with economists predicting global growth to slow down by at least 0.5% as a result of the crisis.

If there is one country on this planet that can contain a crisis of this magnitude, it is China and yet, the country is struggling to bring the situation under control. Having begun construction of a 1,000-bed hospital in Wuhan for treating patients infected with coronavirus, it is now building a second hospital with 1,300 beds, also in Wuhan, indicating the crisis is far from over.

Even if Sri Lanka escapes the spread of the virus, it cannot escape the economic ramifications of the virus. It is better to be prepared for a worst-case scenario, especially with regard to tourism, as the Chinese market may remain off the grid for some time.

Given this reality, the much-hyped global advertising campaign, which has been in the works for some time and due for Cabinet approval, will now have to be recalibrated by diverting the financial resources allocated for the Chinese campaign to other markets until such time the situation is conducive once more.

Another aspect that may cause concern is the Chinese construction firms that are dominating the construction industry in the country. Almost all major building projects in the country are being handled by Chinese firms, employing thousands of Chinese workers. Many of them had travelled to China for the New Year and are currently grounded there due to the crisis. As a result, many construction projects are likely to experience delays and missed deadlines, leading to other financial issues such as loan repayments.

Given this state of affairs, the Government will do well to brace itself for multiple impacts on the economic front even if the virus itself has a minimal impact on Sri Lanka.

The tower of strength behind the warriors

July 14, 2021 byNews Admin No Comments
The military wife is a highly respected social status that only a few ladies would be privileged to be adorned with. They will also be proud due to the altruism and patriotism of their spouses who dar

In defence of Bathiudeen

April 12, 2021 byNews Admin No Comments
Living in turbulent times, the position and calibre of a politician such as parliamentarian Rishad Bathiudeen has been called into question. His high stature and popularity among the Muslim population