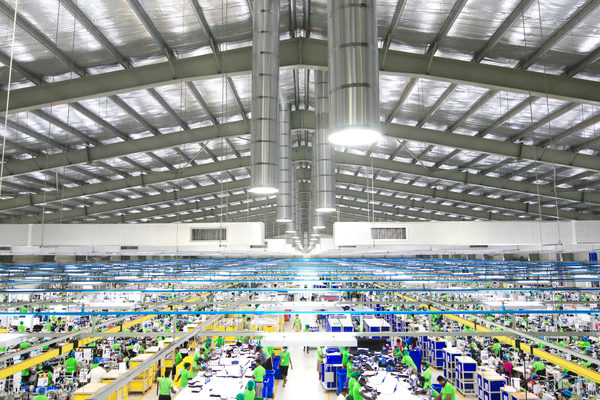 In a world where carbon emissions are at an all-time high and climate change is an ever looming threat to the planet, sustainability has become one of the most crucial responsibilities of the cooperate world.

Therefore, the apparel industry comparatively functions under more pressure to work towards achieving sustainability and reducing its carbon footprint. Some companies, however, have already reached a new level of sustainability and are working towards a better future. Brandix is one such company.

Brandix is no stranger to sustainability. Their efforts recently bore fruit when their factory in Batticaloa was recognised as the world’s first “Net Zero Carbon” factory by the World Green Building Council (WGBC) in 2019. The factory achieved this feat by completely neutralising its environmental impact from carbon dioxide emissions. This was done by being highly energy-efficient and using on-site renewable energy resources.

Since then, Brandix made a huge impact on the three main pillars of the environment – air, water, and earth – by reducing its emissions and incorporating new sustainable techniques. They managed to bring down the air emitted from 276.6g of CO2 for every $ 1 of revenue to 56g of CO2 while reducing water wastage by 13.1liters per clocked hour to 9.3liters per clocked hour. The company also went from sending 80% of their waste to landfills, to diverting 96% of waste from landfills.

“At Brandix, our sustainability strategy is to leave a zero carbon footprint and have zero impact on the environment. This means that we do not compensate by having a negative impact in one area so that we can have a positive impact elsewhere,” said Projects Director Natasha Boralessa during a press tour.

In 2008, Brandix received a platinum rating in the LEED (Leadership in Energy and Environmental Design) green building certification – the most widely used green building rating system in the world – for its factory in Seeduwa and several other Brandix factories later on.

Following this, the company rolled out a broad 10-year strategy in 2010 to become a fully empowered sustainable operation by 2020. This strategy led them to become the first apparel company in the world to obtain the ISO 50001 Energy Management certification in 2011.

In 2017, Brandix built the factory in Batticaloa that spanned 10 acres, with the goal of making a fully self-sustaining factory with almost no negative effects on the environment. During this time, the company pledged with the WGBC to make all of its factories reach the Net Zero Carbon status.

The building is designed according to the US Green Building Council and ASHRAE (American Society of Heating, Refrigerating, and Air-Conditioning Engineers) building guidelines. Around 44% of energy is generally consumed for the cooling of the building. Hence, they focus on optimising the cooling energy through the building design itself. The east-west orientation of this building minimises the solar heat emitting through the building’s walls and windows. The solar panels also provide additional insulation to the building’s roof. As a result, the factory is able to save over 53% of energy in comparison to a conventional factory building.

The factory has 1,800 sewing machines that are operational for around 16 hours daily. All machines are provided with low-powered VSD servomotors instead of clutch motors. Clutch motors are continuously operational during production hours, whereas servomotors operate only during needle time, which accounts for approximately 17% of operation hours. A servomotor can save 68-73% of energy, compared to a clutch motor.


Air-saving devices – knitted garments require uncurling as part of a new operation requirement. For this purpose, compressed air was used continuously. The in-house team then went onto develop an innovative air-saving device to reduce the compressed air wastage by over 40%. They look forward to implement this device across new sewing machines as well.

Eleven per cent of energy is used for the building’s lighting. The factory utilises solar tubes to provide solar light into the building without the solar heat. Additionally, a lux control mechanism is in place to switch off artificial light during daytime. These solar tubes have contributed to increase the indoor lighting level by an average of 122 lux in the building during daylight.


Reuse of waste threads – the factory segregates and stores used thread cone in separate bins. These threads are then reused when new styles are introduced.


Double-glazed e-clear glass – double-glazed argon-filled e-clear glass windows help minimise the heat load. These glass panes are fixed around the main and front building walls to facilitate daylight setting into the factory and a view of outdoor environment.

All internal roads are made with high solar reflectance paving blocks. This helps prevent heat island effect to the building and also reduces rainwater run-off.


Waste collection and storage – all solid waste is segregated and stored in separate bins for recycling.

The factory built a zero-discharge sewage treatment plant. The treated water is recycled and reused for flushing and irrigation purposes.

This pond receives treated water from the sewage treatment plant (STP). The pump house then releases the treated water to the irrigation network around the factory through efficient water sprinklers.


Sustainable site and biodiversity – the fish, ducks, and birds in and around the pond help enhance biodiversity at the premises.

The factory’s installation of a 1.65 MW rooftop solar plant is one of Sri Lanka’s largest. The annual energy yield is 2,975 MWh, which even exceeds the annual energy requirement of the premises.


Plant monitoring and GHG reduction – Brandix implemented online solar monitoring by using the Sunny Portal software. As a result, they experience a 1,591-tonne net reduction of CO2 emissions annually and an overall reduction of 31,820 tonnes over a period of 20 years.

The compressed air network design at the plant is different from a conventional design. The system will generally have one air receiving tank after compression and drying, yet the system they now have in place is designed with two air receiving tanks to balance the system and minimise the loss of energy. An online compressed air flow meter is installed to monitor air consumption.

All water and sanitary fittings at the premises are LEED platinum-rated and helps save over 53% of water, compared to conventional water fittings.


Dish washers – the dishwasher is used for cleaning plates and it contributes towards saving a significant proportion of water used for this purpose.

No transfer of VAT from IRD to Treasury

April 11, 2021 byNews Admin No Comments
Amidst local media reports claiming that the Value-Added Tax (VAT) has been moved from the Inland Revenue Department (IRD) to the Ministry of Finance, the Treasury vehemently denied receiving such dir

Free visa programme to be reviewed

October 6, 2019 byThe Sunday Morning No Comments
The visa fee exemption facility, which was launched on 1 August to boost tourist arrivals, would be reviewed from November to December and either extended or discontinued based on its success.