November 1, 2021 by Dimithri Wijesinghe No Comments 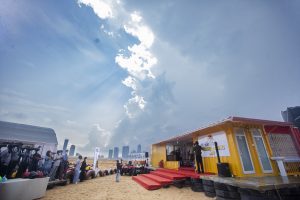 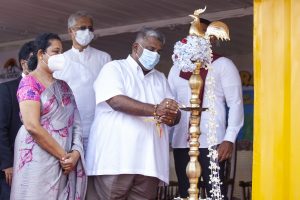 Speaking at the event, the Sports Minister shared that initiatives such as these will play an imperative role as the building blocks in forming a booming sports economy in the island. He stated that these sports events will be packaged together with the island’s tourism offerings in creating an attractive destination for global travellers of all kinds. He added that they wish to make Port City an investment-friendly financial city and are now taking the first few steps to reach that goal. 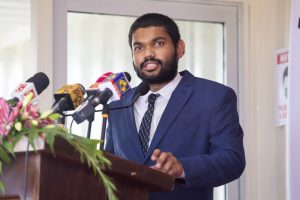 Ranul Thantilage shared that when Crate Adventure (Pvt.) Ltd. first launched their initial arm of the ATV adventure centre in 2018, their main insight was having identified the gap in Sri Lanka between general tourism and adventure tourism. He stated that there are numerous travellers who seek out adventure activities and opportunities to spend time with nature. He added that a majority of the tourists that arrive in Sri Lanka are looking for adventure; given Sri Lanka’s diverse terrains, wildlife, and overall thriving biodiversity, they are looking to explore the great outdoors. Similarly, local travellers have also developed an affinity to adventure-style travel, seeking activities that are now categorised as sporting activities, much like ATV riding, which is more commonly available in the North American and European regions. 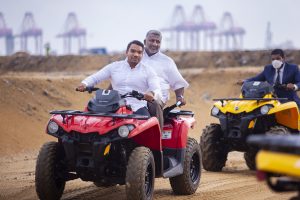 The “Colombo Mountain” ATV track in Gampaha is located in what is well recognised as an adventure seeker’s hotspot nestled in a rocky mountain terrain. This ATV track situated in the midst of the natural forest terrain is home to a great deal of fauna and flora and rock caves, and one could even spot 360-degree lookout points where you could catch a peak of the Colombo skyline. Doing a complete 180, the group is now offering the experience on an entirely different terrain – on the Colombo Port City sand dunes.

Colombo Dunes by Crate Adventure has been constructed in a way that offers three different difficulty levels, in multiple tracks, from beginners all the way up to frequent ATV enthusiasts – a guaranteed adrenaline-driven experience that is unforgettable. 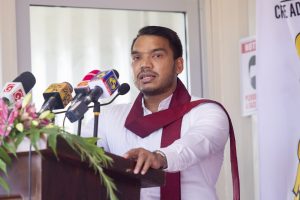 Additionally, at Colombo Dunes you will also be given the choice of driving the ATVs through sand dunes and experience a one-of-a-kind beach ride on Sri Lanka’s only artificial beach. According to Thantilage, the special purpose-built trailer will provide a once-in-a-lifetime opportunity for families and senior citizens to explore Sri Lanka’s first man-made beach, allowing for a leisurely stroll against the backdrop of the sun setting on the Indian Ocean, while the youth enjoy the adrenaline-pumping experience of riding through the dunes. He shared that the inclusion of the activities on the beach were in an effort to offer a mix of adventure, physical exercise, and relaxation with nature for all age groups.

Colombo Dunes by Crate Adventure at Port City is now open for business for anyone looking to dip their toes into the world of adventure sports; there’s really no better place to start.

August 2, 2020 byNaveed Rozais No Comments
A look at small independent food businesses that operate solely online and where they fit in the new normal

Exclusive: The head and heart must work in harmony – A chat with Jane Goodall

June 20, 2021 byNews Admin No Comments
Activists, fighters, advocates, or campaigners – whatever the term – come in different shapes and sizes, but it is quite rare to see one that is graceful and loving in their approach. When in 1960, th