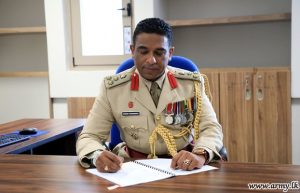 Brigadier Wickramasinghe, prior to this appointment was in South Korea to read for the National Defence University (NDU) course.

Brigadier Chandana Wickramasinghe during his Army career of more than 30 years has held a number of Command and Staff appointments.

He also served as a Military Staff Officer in the United Nations mission in Haiti during 2007 – 2008 and also as a UN Civil-Military trainer.

In recognition of his commitment to the defence of the country and bravery in the war for peace, he was awarded gallantry medals, Rana Wickrama Padakkama (RWP), Rana Sura Padakkama (RSP), each medal twice. He also has served as a Brigade Commander in the 511 Brigade in Jaffna.

Party leaders meeting to discuss ceremonial sitting of the House

November 7, 2018 byEaswaran No Comments
Speaker Karu Jayasuriya has called for a meeting of parliamentary party leaders this evening.

Banning the burqa: Why did Muslims go from conciliatory to combative?

March 25, 2021 byNews Admin No Comments
There are two rationales for banning the burka. One is the security-related concern, and the second is the “social integration” standpoint. First, to take the case of the western nations such as Fran