Gentle creatures that walk our lands and swim our seas

Last week, we stumbled across an incident that made us truly question humanity and the entrenchment of its so-called values that seemed to have unfathomably gone astray.

Two individuals were arrested for selling turtle meat in Arachchikattuwa in the Puttalam District. The incident instantaneously prompted us to inquire into and enlighten ourselves of these gentle creatures that both swim our seas and hover our lands.

One could only dwell on the joy of how lucky we got as human beings – to be able to communicate, to have fundamental rights, accompanied with rules and regulations that rise to protect us whenever the need crops up. To state the obvious, not only do human beings tend to harm their own kind, but quite alarmingly harm those creatures that weren’t born with the endowments mankind is blessed with.

One can’t stress enough on how important it is to conserve and preserve our territorial wildlife, but what of marine life? Our focus this week is on turtles, and as per independent marine researcher and author Howard Martenstyn, sea turtles play key roles in supporting ecosystems in the ocean as well as on land.

“Sea turtles have been found to support healthy reefs by controlling sponges which would otherwise out-compete reef-building corals for space, whilst dune and beach vegetation are nourished and grow healthier.” Healthy vegetation with strong root systems prevents the subsequent erosion of the beach. 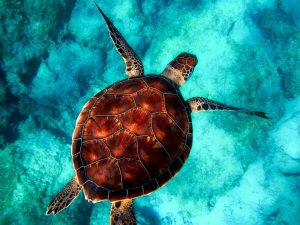 To begin with, turtles are reptiles and as per the natural process, once they hatch out of their eggs, they immediately crawl into open waters, which is where most part of their lives is spent. They happen to be airbreathers – meaning they’d only spend several minutes under water. Wildlife and Nature Protection Society immediate Past Director Rukshan Jayawardene noted that female turtles would invariably return to the same stretch of beach in which they were born for breeding purposes. The mortality rates of these hatchlings are placed at a striking high of 90%.

Whilst the species boasts a lifespan ranging from 80-100 years, Jayawardena noted how these turtles spending a large portion of their time at sea might prevent researchers from instigating long-term research on them. “No one really keeps these turtles in captive situations like aquariums, so even if they die, there’s no way of finding out what their longevity is.”

This remarkable trait of longevity is likely to be intricately linked with that of its nutrition. Jayawardene included that whilst they reflect omnivore-like traits, by consuming jellyfish, its nutrition consists of vegetation for the most part. “They go to the bottom of the ocean and this is where they mostly feed on vegetation such as seaweed.”

Following the sad event of selling turtle meat, we were quick to understand that not only are these species hitched to the risks associated with the ever-growing plastic menace, but are also forced to succumb to travesties of such nature.

“They are protected species. But there are people who catch them and it’s a very small sector of society that does so. Nevertheless, it is the Wildlife Department that needs to prosecute these culprits together with the Police.

They too are required to be educated on the subject matter,” denoted Jayawardene, whilst commenting on the matter. 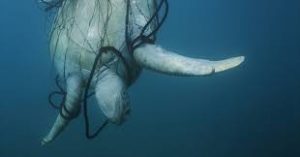 Whether they’re endangered or not is dependent on the type of species. Some species are endangered whereas some of them aren’t. We were told that numbers are much lower than what they used to be. This could be attributed to habitat loss occasioned from beaches being converted into tourist spots.

“Unfortunately, safe places for turtles to breed are lessening by the day” added Jayawardene. This prevents them from returning to the beach they were born in, despite them being programmed to do so.

If you’re social media savvy, it’s a given that you are likely to have stumbled upon the plethora of posts referring to marine creatures and sometimes even sea birds that succumbed to the mighty plastic travesty. Amongst them are turtles. As mentioned previously, jellyfish are a part of some species of turtles’ nutrition.

“A modern threat faced by these species are the plastic bags in the water that look like jellyfish,” said Jayawardena. He further denoted that turtle deaths occasioned due to the consumption of plastic/polythene are strikingly high.

Additionally, he asserted that whilst there are certain organisations that work towards the conservation of turtles, there are incidents where even this has been abused for the furtherance of ulterior motives. For instance, when turtles hatch from their nesting grounds, individuals retain the new born hatchlings, so that tourists can come and witness them.

“New born turtles consist of amniotic sac at the lower part of their shells. This acts as an energy package for the newborn turtles to swim out to the sea, over the reef, and then into open waters. So the problem with retaining these turtles in tanks is that they would swim around,” he explained.

Jayawardena also said that the issue with this is that the turtles usually exhaust this energy by the time they’re released, thereby granting a negative impact on its overall performance.

As the Flora and Fauna Protection Ordinance 1938 which was amended in 1972 goes, it is an offence to capture, kill, injure or possess sea turtles or their eggs.

Whilst we witness many organisations set in place for the protection of these creatures, we spoke to Kosgoda Sea Turtle Conservation Project (KSTCP) Founder Dudley Perera to shed light on their services.

Showing dedication towards the cause for nearly 31 years, KSTCP is a conservation project carried out privately under the guidelines of the Wildlife Department.

They mitigate these incidents through the collection of turtle eggs from markets, and release of the hatchlings the moment they hatch.

Perera mentioned that in relation to the law pertaining to this particular issue, the possession and selling of turtle eggs is illegal. The areas set to become breeding grounds are densely populated.

This makes it challenging for conservationists to protect eggs the natural way.

“For instance, it is mostly along the beach stretch starting from Bentota up until Galle that is regarded as the demarcated breeding ground for turtles. Segregation and separation might be challenging as these areas are inhabited by human beings. So instead, we extract the eggs to safer grounds and release the hatchlings as soon as they’re born,” said Perera.

Perera further stressed on how, although killing of turtles in these areas is in fact rare, probing on the protection and conservation of turtle eggs remains a constant problem. Apart from this, assimilated within their ethos are awareness programmes and research projects.

Why Kombucha, how kombucha?

January 12, 2021 byRusiru Keppetipola No Comments
It all started with a friend attempting to explain what kombucha tastes like to their very Sri Lankan palate, describing it as “something in between beer and vinegar”, and weirdly enough we were..