Sri Lanka’s way of life – our very freedom came under attack in a series of deliberate and deadly terrorist acts on Easter Sunday, 21 April morning.

The explosions targeted innocents, reawakening a nation that has barely had the pleasure of experiencing peace, having emerged from an ethnic war which came to an end just only a decade ago. It is hard to believe that just 10 years ago, we were mourning the loss of life and living in constant fear; it was certainly not pleasant and nobody wishes to go back.

The extremists chose a day of worship and targeted those of faith, but one can almost hear a nation’s rumbling that says “we’re not that easy to takedown, we’re a lot stronger than you think”.

The nation’s symbol of resilience – the indomitable heart of our country – is its people, not Christians, Muslims, Hindus, or Buddhists but all Sri Lankans. The loving Sri Lankan people are famous for their overly generous ways and a tendency to poke their noses in other people’s business.

Terrorist attacks may shake the foundations of our most blessed places and even our most sophisticated structures built so far high into the sky, but they cannot touch the foundation of the Lankan way – in that they have failed. Our country is strong and our people even stronger.

One day, there will be those who are too young to recall this event in Technicolor, but you and I will remember it as if it was yesterday; many of us will carry it with us, afraid to linger in crowded places, suspicious of fidgeting strangers, and a loud noise would send us crumbling to the ground or running for safety.

But it is our duty to ensure that when the dust settles, we can look back on our actions and be proud. We owe it to Sri Lanka to remain united, to not succumb to the whims of terrorists, and to never cause a divide amongst our countrymen. 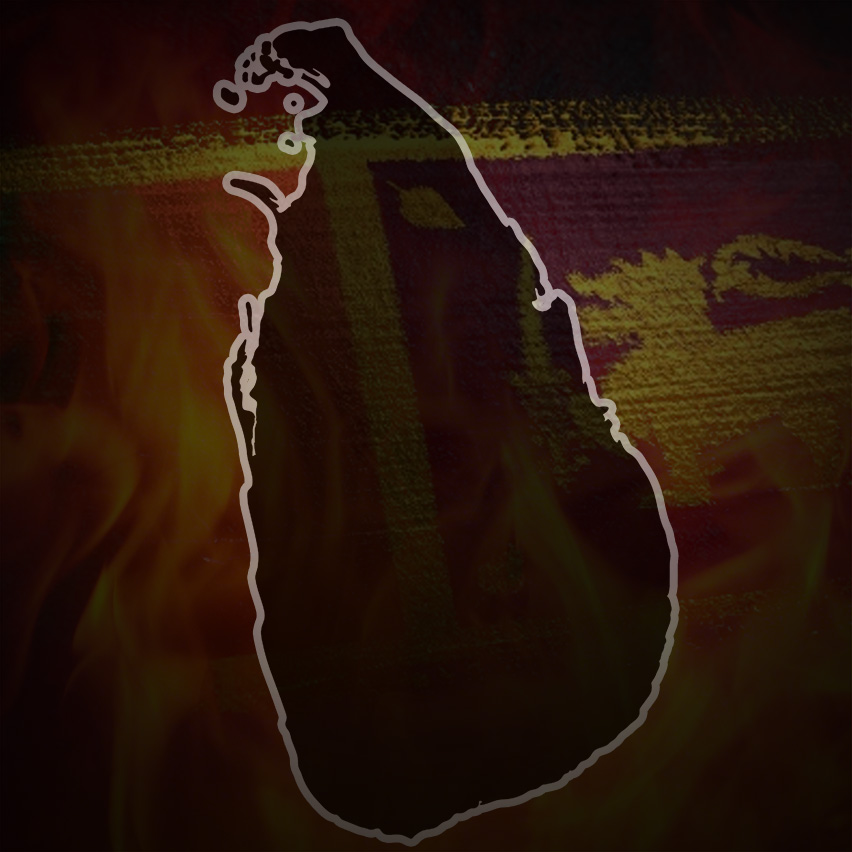 We spoke to the Lankan community merely hours after the attacks and here’s what they had to say:

Speaking as a Christian and an all-round good human, Rishani said:

“It is important to safeguard all who are affected by this tragedy, especially the innocent Muslim community caught in the middle. They are not to be held accountable for the actions of a few. Everyone should rally around to show solidarity to those who are affected as well as the Muslim community. It should be a priority to safeguard all lives, especially the Muslims at a time like this. It is not only the government’s duty; it is our duty too to rally around vulnerable groups of people to show our solidarity. This should be the Christian response.”

The Soup Bowl is a team which works with and opens its doors to all communities who are poor in spirit and economically challenged.
The Soup Bowl Founder Rishani Sittampalam Semasinghe

“We woke up to a sad morning on 21 April, and the news of the churches being attacked felt so personal. I started panicking like I would for my own family, calling my clients, friends, and everyone I knew who was celebrating Easter. Because in this country, we live as one and every Sri Lankan would have people they care about from all religions, and to honour the lives of those who we lost, we have to understand that this was not an attack on a religion, entity, or group – it was an attack on all of us, an attack on our peace and our future, and we must stand together to fight this threat to our society.

Anybody can twist this story however they want but tomorrow, I will walk out of my door wearing my hijab without any fear, because I know that my Christian, Buddhist, Hindu, and all Sri Lankan brothers and sisters will be there to protect me, because this wasn’t an attack on one group, it killed our loved ones and we are fuming.”
Sarah Faisal

“It is a difficult situation to say the least; all that we can say as a community is that we thoroughly condemn the actions of terrorists and we stand in strength and solidarity with our fellow brethren, whoever they may be, if they are Sri Lankan and are victims. We call upon our communities to assist in any way they can in these pressing times, it is important not to lose track of what is important and that is to remain united. We mustn’t be tempted to blame – pain gives way to irrational thought, but we must remain strong and not let extremist actions divide our nation.”
Suchith Abeyewickreme of Rise Up Sri Lanka

“At this deeply painful and dark time, the light of true Sri Lanka is apparent in the thousands of civilians and security forces trying to help their city as much as possible (via blood, rations, or comfort). Now more than ever, peace and solidarity are what holds us together. Sri Lanka is strong.”
Kinita Shenoy

“I think our focus should be on staying safe and helping those victims of the attacks and not to assume who’s behind the attacks and be influenced by irrational biases. We must rebuild together as a nation and remain resilient. If we blame and point fingers and fight amongst each other, we are giving the terrorists exactly what they want. This is not an ethnic conflict. This is an unfortunate act of terrorism, affecting all Sri Lankan citizens and tourists who were at the wrong place at the wrong time.”
Grace Wickremasinghe

“It is in such times like these that we must band together and stay united despite our differences in religion, cultures, or creed. Unity has always been our greatest strength and we urge the public to continue in that sentiment and help with the efforts to recover from this sad day. Instead of turning against one another and making things worse, we urge everyone to be smart and verify any news that comes their way before they pass it on. Stay safe and stay strong. Sri Lanka we will get through this and come out stronger and better than before!”
To Always duo Ursula Bastiansz and Ruwandi

Sri Lanka’s religious leaders stand strong in the face of adversity, encouraging any and all to remain united.

“We are here because of certain agendas set forth by our political leaders; their vested interest has not helped our country and Sri Lanka is now paying the price of the harmful seeds planted by those in the past. A country rich in culture, religion, and diversity – we have so much potential to build harmony and right now, the people must take a stand and step up and respect one another.

Jesus has said that our love must overcome the shortcomings of others; the cross is a symbol of unity and what Jesus did for his fellowman. Regardless of who they were, I believe we must share that love with the masses, particularly our children.

They are our future and the language we speak can cause harm and it carries weight – we must recognise the power of words and the impact it has on the future generations. At times like this, we must love and stand against the enemy, together place your hand upon the others’ shoulder in solidarity.

I wish my fellow countrymen Godspeed and may God bless us all.”
St. Francis of Assisi Church Vicar Father Melvin De Silva

“As a community, we are desperately heartbroken and we express our collective support in solidarity to our fellow countrymen. These are dark times that we have to cross. We feel hurt and betrayed that we were unable to protect our country – our bothers, our sisters. It is an attack on humanity, the invading of sacred ground; a place of worship, peace, and serenity has been tainted by the actions of terrorists.

We as a community is ready and willing to stand up united, if you look at the masses, people are currently living in fear. We must guide them to ensure that confusion and fear does not fuel incentive for further violence.

Finally, when the dust settles, it will be a major task to rebuild and recover, and we desperately hope that we are not headed towards the times before – the motherland was united as one.”
Sheik Muiz Bukhary

“It’s a grave tragedy that has befallen us, but it is not a religious or racial feud, it is the cause of terrorists. While an extremist organisation has claimed responsibility for these acts, we must keep in mind that it is only at face value is it the Islamic State – it is not truly Islam that motivates their actions.

Regardless, what’s important right now is that the Sri Lankan Muslim community comes together and publicly condemns these actions; it is imperative that Islamic religious leaders take initiative to vehemently shut down any ideas that suggest Islam is the motivation behind such acts of terrorism.

Leaders of the community must show people the way, and clearly declare that these acts are not acts of truly religious persons and that the community shuns such actions.

People are vulnerable and are, therefore, susceptible to misinformation and harmful ideologies. Now is the time for leaders of communities to come forward and declare that the harming of another in the name of religion is not an act that will bring you closer to God and it is in fact an act that will condemn you to an eternity of damnation.”
Ven. Omalpe Sobitha

“We as members of the Muslim community urge the Government to immediately suspend all Muslim groups operating as their own entities.

We request this on the grounds that there are five pillars in the Islamic faith that one must satisfy, and beyond that there is no real requirement for such organisations. Until we have full transparency of their practices, screened by specialists, we urge a suspension.

Next, any and all Muslim political leaders, whomever they may be, inside or outside the parliament, if intelligence groups state that they have any stake in extremist actions, we urge that they be pulled out for the time being and be subject to an investigation. We urge the general public to denounce such leaders who may preach segregation and racist ideals – do not cast your vote for such persons if they voice such extremist ideals.

The damage they will cause to the community is immense.

Finally as a community we must express the following:
“We feel our fellow countrymen are looking down on us and we are bearing a feeling of guilt, but we must urge any and all of you to understand that while these heinous acts have been committed in the name of Islam, they are carried out by an extremist group, which we too as the Islamic community condemn and reject.
“Our community has a deep and rich history in Sri Lanka and in that illustrious history, we have not waged wars nor demanded land for our taking.
“We are a part of this country’s economy, and if we succumb to extremist ideals and divide ourselves, our country will not survive it. And so we speak to our community, put our country first – your number one priority should be Sri Lanka. Keep religion aside.
“Sri Lanka has been tolerant; it has granted us liberties, we have more than enough mosques. And so if you are of two minds about these hateful actions, then we urge you to rethink about the safety of your motherland.”

Happy Valentine’s Day, but only to him and her

February 14, 2021 byNews Admin No Comments
Valentine’s Day is possibly one of the most commercialised holidays that isn’t even an actual holiday. It receives a great deal of media attention – press outlets share stories of couples proclaiming

January 18, 2019 byRandev No Comments
Pulse and Aura India, in collaboration have organised a forum in the hopes breaking taboo in the present day.