The cost of Aunt flo’s visits

A recent article published by The Advocata Institute, regarding diaper taxes, was as the result of an unfortunate incident reported in May, 2018 where parents stole diapers from the Lady Ridgeway Hospital for Children (LRH).

The referred article touched on the abhorrently high cost imposed borne by families every month when purchasing diapers, and also mentioned the colossal import tax of 101.2% on sanitary pads and tampons levied by the Government.

In a country where 52% of its population consists of women, as per reports released by the SAARC Chamber Women Entrepreneurs Council, out of 4.2 million menstruating women, only 30% of them have access to sanitary napkins.

The circulation of the article and it gaining considerable traction on social media prompted advocates to pressure the Government for positive change.

As a result, in September, 2018, Minister Mangala Samaraweera informed the public that the Government would revoke the CESS of 30% imposed on sanitary napkins and tampons which brought the tax down to 62.6%.

The Advocata Institute, which originally published the article, is an independent policy think tank based in Colombo.

We spoke with the institute’s Manager Research Communications Anuki Premachandra (pictured above) with regards to the data revealed by them.

A comprehensive understanding of the nature of our current situation can be obtained if you look at the following price comparisons: The average price of a packet of 10 pads in Sri Lanka is Rs. 130.

A cost of a single pad in Sri Lanka is 24% more than in US and 26% more than the retail price of a sanitary napkin in India.

Protectionist taxes ensure security for local producers while also allowing a greater selection of options for the consumer; this has inadvertently resulted in local producers enjoying the comfort of a large profit margin per packet as prices in the market are high in itself, owing to taxes.

Premachandra, who was working in the field of public policy for the last three years, provided that while the tax was reduced, it still remains exorbitantly high, and pointed out how our neighbouring country, to which we are often compared (India), eliminated its 12% tax on feminine hygiene products in 2018.

Similarly, Canada and Australia also eliminated their taxes on sanitary products, which were considerably to begin with in comparison to Sri Lanka, and Kenya was the very first to do it in as early as 2004.

She further pointed out that it not only comes down to how much of a financial burden it is, but it also poses a health risk.

A study conducted in India linking cervical cancer to bad menstrual hygiene practices discussed the use of a cloth rag as bad practice; cervical cancer – which incidentally, is the second most common type of cancer for Sri Lankan women.

Additionally, according to the HPV Information Centre: “Current estimates indicate that every year 1,721 (Sri Lankan) women are diagnosed with cervical cancer and 690 die from the disease.” See more here: www.hpvcentre.net/statistics/reports/LKA_FS.pdf.

Anuki Premachandra also pointed out amongst the percentage who are unable to afford sanitary napkins are girls who are still in school, and that their parents opt to keep them at home during the menstruation period as cloth rags aren’t a practical alternative.

She added that it was unacceptable how it’s begun to affect the education of our girls. 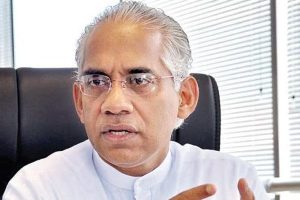 State Minister of Finance Eran Wickramaratne too corroborated this fact in a statement made last year, providing that 60% of parents without accessibility to sanitary napkins don’t send their daughters to school during the period of their menstrual cycle, adding also that although myths and superstitions remain a contributing factor, having to incur large sums on sanitary pads is the primary concern.

Speaking of the unfair taxation imposed on Sri Lankan women, Premachandra said: “Being a Sri Lankan woman is not easy.From having to constantly battle gender stereotypes and rebel gender roles, women also have to burden the financial cost of something that is beyond them.”

Given the stigma surrounding menstruation, many Sri Lankans – including policymakers – are unaware of the impacts of poor menstrual hygiene management (MHM).

With regards to the stigma surrounding this topic, Anuki provided: “The fact that this area of conversation has a great deal of stigma attached to it has bothered me for years and I am hoping that more conversations of this sort from different perspectives – be it the economic burden of costly pads, the cultural stigma attached to discussing these things etc. – would help change the current reality for the 10.5 million women in Sri Lanka.

“My motivation to push for the reduction of these taxes was the fact that I was genuinely advocating for and voicing out issues that concern women for the past few years.”

This current tax structure, as it is now is an example of an unfortunate public policy reflecting also the backward nature of our society. Taxing a women’s necessity so heavily does not reflect well on our country’s policy choices.

What to expect at Luna Music Festival 2020

March 1, 2020 bythemorninglk No Comments
On 7 and 8 March 2020, Luna Laguna, located in Thottakadu, Kalpitiya, will host the Luna Festival – a two-day, two-night affair with camping, yoga, and live music.