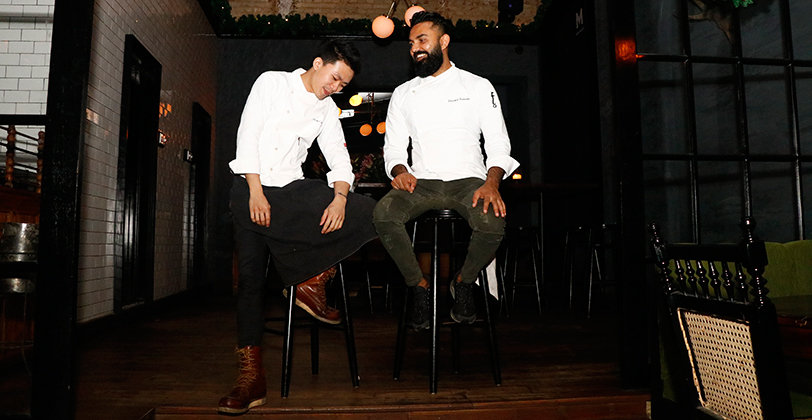 Be our guest – Baillie Street Merchants 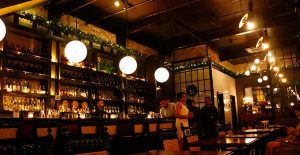 Baillie Street Merchants on Mudalige Mawatha, Fort Colombo is a speakeasy-style cocktail bar that’s been in operation for just under two years and has been rapidly rising in popularity. On Christmas Eve, Merchants saw a bar takeover with Australian Dula Lorensuhewa and Singaporean Jiawei Bai, both of whom are from Employees Only, an originally New York-based brand now gone global.

Employees Only is a speakeasy-themed restaurant chain that has outposts in Miami, Hong Kong, Singapore, Los Angeles, and Sydney. Dula Lorensuhewa, born Sri Lankan but now Australian, is a bartender/mixologist who currently works in the Sydney branch and also helped set up Merchants back when it started.

We caught up with the duo Dula and Jiawei to pick their brains about the hospitality experience in their respective countries compared to what Sri Lanka has and can offer. The duo have many years of experience under their belt and they shared with us the ins and outs of tending bar and managing a restaurant.

However, before we got into anything, we needed to clear the air about the mixologist versus bartender debate, and Dula was quick to put it to rest. “To me, it’s the same thing,” he said adding that he feels people use the terminology to set them apart from bartenders but the way he sees it they are all doing the same thing and the naming convention has no significance. 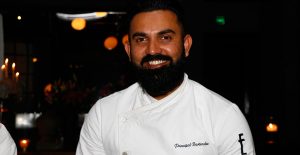 Both guys came into tending bar quite young with Jiawei sharing that he held a few part-time jobs when he was 18-19 years old and following his compulsory two years in the army, he thought about pursuing it fulltime. He’s currently the headman at Employees Only Singapore and he shared: “The timing was really great for me coming into Employees Only and it’s been a great learning opportunity and a space for me to grow.”

As for Dula, he shared his rather sitcom-esque introduction to bartending when he was working in a restaurant in Australia and was asked to step in for an absentee bartender. “The manager just looked at me and said, ‘can you tend bar’ and I was like, ‘no, no, I don’t know anything about that’ but he was like, ‘don’t worry, it won’t be difficult and if you have any issue just call me’ so I went ahead. It was one of the busiest days at the bar and people were ordering stuff from me and I had no idea, so I was pretty much looking at the bottles, looking at them, and looking at the bottles again.” After that experience Dula vowed to learn everything about tending bar and from that point onwards he just kept learning.

In the late 2000s Dula got into competing in cocktail competitions which kept him in the industry much longer and in 2015 he represented Australia in the World Cocktail Championships (WCC) where he won Best Technical Bartender, which was one of the awards Australia had never won before. He went on to represent Aussie in the 2016 WCC as well.
Talking about why they are doing this bar takeover, the duo shared that it’s really a collaborative venture between Sydney and Singapore Employees Only, stemming from a passion to learn and get better. “It’s to spread the love of Employees Only, give what we know to fellow bartenders around the world, and also learn from what they know,” said Jiawei adding that: “It’s a bit of sharing and learning from different bars from different countries, to get a sense of what the culture is like, what the bar scene is, what the preferred flavors are, and what the demand is.”

While Dula grew up for some time in Sri Lanka and has been here on several occasions, including the time he came down to help set up Merchants, it’s Jiawei’s very first time here and having checked out the general bar scene in Colombo, he said that the major difference he sees here is there’s definitely some room for improvement. 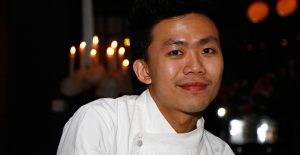 “The way they take the orders; it takes a long time to come to the customer. Say I order a gin and tonic, sometimes they forget about it or it takes a while. On average you have to wait 10-15 minutes for one simple drink and for me, I think it’s a bit too long,” Jiawei said adding that in his limited experience what he saw was that there wasn’t much of an effort made into building a rapport with a customer. “At some bars, you order one thing, they give you the drink, give you the bill, and done. So there’s no communication, no feedback, and no interaction.”

He said that it is easy enough to put a drink in front of you but there’s more to the job. You have to read a room and read the customers’ body language to make them more comfortable. Even if what you’re serving is a simple draft beer, you should be putting yourself out there and ask them how their drink is; whether it is too cold, would they like another one, etc. “I know it may feel unnecessary especially when it’s a simple drink but it’s important to do this,” he explained.

The “lack of hospitality” can be rather confusing when said in relation to Sri Lankan people because we are all about that hospitality, but Dula shed some light on the matter sharing that while Sri Lankans are probably the most hospitable nation, with us treating our guests exceptionally well, when it comes to restaurants and hotels there is this cultural view that needs to improve – this is where we see the staff as “slaves” there to service us than anything else. He said this “makes it very uncomfortable for the staff to create that relationship, especially with the wages in the service industry being very low”.

He shared great insight where he asked us to imagine a scenario where someone walks into a restaurant and orders a $ 1000 bottle of wine. How can someone who has never tasted that bottle of wine or might not make that much money in 10 years relate to that? However, in developed countries you can somehow create that relationship pretty quickly.

Elaborating on this, he shared: “It’s also a confidence thing of the younger bartenders as they’re afraid to make mistakes; it’s a livelihood for them and they have responsibilities to their families and so maybe people are playing it safe.”
However, he said that this culture is changing especially at Merchants where there are a lot of expats coming in and the staff get a great opportunity to practise their hospitality skills.

Speaking on this exercise at Merchants, Dula shared: “What we are trying to communicate to the guys here as well is that when you are working in a restaurant, you are the host and everyone coming in is your guest, and they are essentially coming into your home so it is our responsibility to make them feel comfortable.”

A look at the unique Kandy Esala Perahera

February 3, 2019 bythemorninglk No Comments
Motherhood is a period of new beginnings. With their bodies changing to turn themselves into new homes for a new life, it’s no surprise that many mothers find it hard to adapt to their new role.