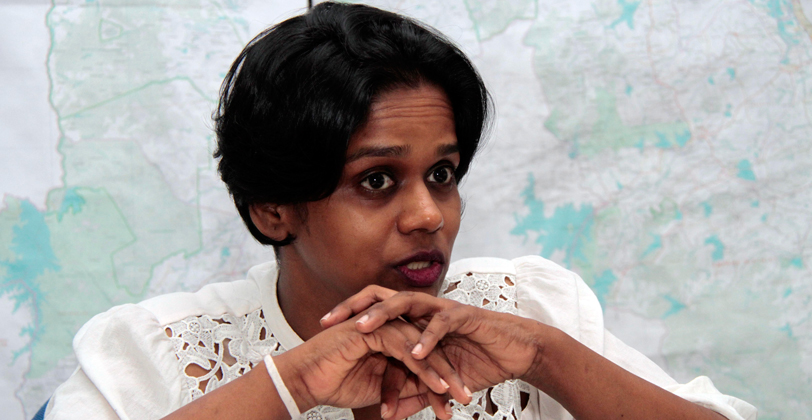 Activism in times of crisis

By Dimithri Wijesinghe
Photos Indika Handuwala
——
Bhavani Fonseka is an attorney-at-law and senior researcher at the Centre for Policy Alternatives (CPA). She’s been with the CPA since her return to Sri Lanka in 2002, following her studies abroad. While her undergraduate studies and master’s were in law, Fonseka always harbored a passion for human rights.
Following her 16-and-a-half years of activism in the island, The Sunday Morning Brunch spoke to Fonseka. She shared with us her observations about the changes in Sri Lanka in terms of civil society and activists giving way to policy and good governance, and particularly, the importance of such activism in a time of crisis.

In your experience, having worked both overseas and in the country, how would you categorise Sri Lanka’s level of activism?

I think Sri Lanka has very dynamic citizen activism; it’s not limited to just civil society groups and is extremely varied. We’ve witnessed this in droves in 2015, during the presidential election, when people were very active and peacefully spoke their piece about how we needed a transition, and made their voice heard in a non-conflicting manner. We saw this again last year, i.e. similar activism during the constitutional crisis. So in Sri Lanka, we cannot say activism is limited to one professional group or age/geographic group. Here, I think it’s prevalent across the board.
I think Sri Lanka has a very organic collective of activists who aren’t organised around any groups pushing agendas. People are just active, whether via protests, vigils, social media, poster campaigns, etc.
There’s no doubt that activism is there, but of course the question exists of whether this activism leads to something as well, and I think that’s the challenge. This particular activism per se doesn’t mean you will be heard, that you will get noticed for your cause, or that you have an impact.
This is owing to the fact that our country’s decision-making remains, unfortunately, very much a closed-door process. This is an area that the CPA is focused on pushing; for greater inclusivity and greater transparency and the fact that people should be involved in the decision-making process.

Is Sri Lanka’s activism as consistent and effective? How has it impacted the current crisis situation?

Activism is an exciting dynamic, but does it really have an impact is a question. What we saw in 2018 during the constitutional crisis – with people stepping out in all age groups, on a daily basis, writing, protesting, and being visible – is a very good example where there was an impact via activism. People stood up for something that was very wrong; they didn’t take the position of politicians or political parties, but stood for democracy instead. This was a good example where that activism translated into positive change. It was a moment in our history where the country absolutely refused to remain silent in letting a constitutional coup occur.
We will see how the more recent crisis plays out, along with the activism around that. I think people may still be in fear, that there still remain many questions and uncertainty as for what the situation really is. But we see many people being active, on social media, while public gatherings haven’t really happened – there were a few vigils, but that was all. I think activism will be tested in the next phase.

What can activism do for us right now?

I think different components need to be factored in when considering a situation similar to the one we’re in, the most significant being the importance of being a responsible citizen. While activism is needed, there’s so much misinformation circulating where people do not verify material and respond without checking for accuracy, which can create further panic.
Also, one has to be alert about the fact that Sri Lanka is in a situation where so much is happening within a short span of time – on 21 April we had the explosions and now, a few weeks later, we’re experiencing communal violence, emergency was declared, and also the social media bans.
A lot is happening, and in terms of activism, one must think of how to do it responsibly but also in a way that impacts.
So how does one challenge these things, for example the emergency regulation? It’s not something new to Sri Lanka, and what we saw on the 22nd was that it vets broad sweeping power and I think while it is most certainly needed in a time of crisis – Sri Lanka is in fact in a time of crisis – the question of where to draw the line needs to be asked. Security is important and so is human rights, and if there is a tilt towards one, in terms of security, how active should and does one get?
Unfortunately, I’ve seen that since 21 April, the activism we saw in 2018 has been muted. But that is because of the prevalent fear, the complete paralysis we are experiencing. I think as citizens we should strive to navigate these difficult terrains a little better, in a more effective manner. We need to be able to realise that while there are dangers, it doesn’t mean we have to be silent. We need to be continuously alert, speak out, and be able to respond, if not individually then collectively.

Fear seems to be a sound response to what we are experiencing. What can civilians really do in the name of activism in the current situation?

Fear is understandable, but we must also search for ways to look beyond that fear.
There was a vigil a few days ago at Independence Square which attracted a lot of people. There were nearly 1,000 people at this vigil but unfortunately many who usually attended other vigils didn’t attend this one. And that’s because they were scared to come to a public place.
At some point, we have to address our own fears and stand for certain things. We need to stand up for reconciliation and peace, and thereby, go beyond our fears.
In these moments of crisis, I accept that there is an element of danger and that we have to be careful, but we also need to step beyond our own fears and comfort zones and push forward, because if we don’t, we let fear take over. So activism, smart activism, is important; activism that doesn’t bow down to the fear psychosis.

As you mentioned, we have collectively organic activism in Sri Lanka, with many taking a stand on social media. How do you think the repeatedly-enforced social media bans affected such activism?

Social media bans have been incorporated by various governments to curb crisis situations, to prevent escalation. With a drastic measure such as this, we must look at what is necessary versus what is proportionate.
I was in Kandy when violence erupted back in 2018 and I can say that shutting down certain platforms helped in trying to control the spread of misinformation and also contained the violence.
However, was the Government in the right for enforcing a blanket social media ban, for several days, especially when most people were able to bypass it via VPNs and access these platforms? The effectiveness of such a ban also needs to be questioned.

However, overall, in terms of immediate security needs on the ground in Kandy at the time, we saw that the violence was essentially contained because people couldn’t share information and messages.
Regardless, what we see now is social media bans being brought in hazardously to address risky situations, without much rhyme or reason. The Government seems to be operating in this reactionary mode.
While I think the ban is needed at particular moments, it shouldn’t become the easy step to take, and if the Government is genuine about containing violence, they should take proactive steps in instilling confidence amongst the minorities and victims. They need to engage with the public and say that they are taking the necessary steps, and be transparent, to an extent, about the steps being taken.

They also need to stand strong in terms of accountability, because what we’ve seen in the last few years is that those behind ethno-religious attacks targeting minorities were not held accountable, despite evidence being available.
The CPA raised these issues with the authorities and the Police, asking why the perpetrators were not prosecuted and held to account despite the availability of evidence.
I would say there’s a direct link between this and the spread of violence, because a lack of accountability breeds impunity, and to be honest, a social media ban can only do so much.
If perpetrators feel as though they’re never going to be held to account, we are not addressing the problem. It’s just a panicked reaction and not helpful in the long term.

Sri Lankans seem to have been living in harmony until these attacks and the fear that resulted. Why do you think it was so easy to give voice to conflict?

Sri Lanka has a legacy of violence spanning decades, pre and post war. So you can’t just assume that by ending the war the conflicts were resolved.
We continue on, despite marking a decade of conflict, as successive governments failed to address the root cause of these violent actions. We made several attempts to provide a solution to the ethnic questions, and even 10 years after the end of the war, minority communities would say their grievances are yet to be addressed.
If we’re not going to make major reforms, a change in attitude, or a change in mindset, we’re going to be stuck in this setting of conflict with constant fear, apprehension, and uncertainty.
The recent acts of violence show the level of remaining issues amongst the community themselves, inter and intra-community relations require a lot more attention.
How communal violence can spread so fast and how a country coming to terms with a decade of peace has so much hate are vital questions. I think it really speaks to the fact that Lanka continues to harbour tensions, fear, and suspicion amongst its communities.
There is truly a lack of leadership – political, religious, or otherwise – that really speaks to the need for coexistence, tolerance, and pluralism. If you look at the political statements being made, they have changed their tune to a more positive one, saying that peace is what’s necessary, but we can argue that these are empty words and they haven’t really looked at our concerns.
I believe there’s been a wake-up call since 21 April, especially as we mark a decade of peace. While we won the war at great cost to human life, in reality, we missed a 10-year-long opportunity to get things right.
Unfortunately, the question remains – are we ever going to escape from this cycle of violence in which we seem to be trapped?

July 10, 2020 byJennifer Anandanayagam No Comments
Last Tuesday (7), bodies of two teenagers were recovered in Kandy. It was reported that the youths had jumped together into the Polgolla Reservoir after suspectedly being denied their love affair.