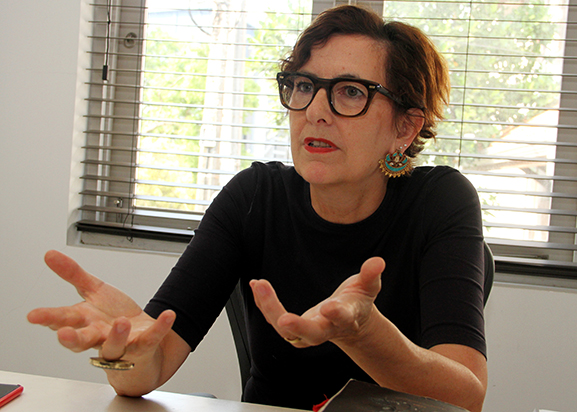 ‘Something is always happening in Sri Lanka’ – Fabienne Francotte

February 23, 2020 by Bernadine Rodrigo No Comments

Fabienne Francotte on why Sri Lanka is part of her identity

A Belgian who found her place in Sri Lanka, Fabienne Francotte, is an artist who found her passion a little later in life. Her latest exhibition titled “I Don’t Know But I Remember” opened on 19 February at the Saskia Fernando Gallery at 41 Horton Place, Colombo 7. The exhibition will remain open till 20 March 2020.

“I Don’t Know But I Remember” presents pages of Fabienne Francotte’s diaries recorded from 2016 onwards; her first years as an expatriate in Sri Lanka. Cathartically removing each page from within her books, the artist created a chronological visualisation of time, both interconnected and disconnected. The images are a survey of her surroundings, environment, and intimate experiences; a juxtaposition of emotional exchanges and simple observations.

Of course, just like her paintings, it is impossible to decide her age and it is also impossible to come to a conclusion with what she says, as she speaks with a passion, a feeling, and wisdom which could be worth thousands of years.

Fabienne first found herself in Sri Lanka as a tourist early in the two thousands when she had not yet found her true passion or discovered her incredible talent. She came with her husband for two weeks and after it was over, all she could tell him was that a fortnight was simply not enough.

Afterwards, she returned back to her job at the École Nos Enfants et École Active, Brussels, where she was a language teacher who taught children of adolescent ages from 1996 to 2016. However, one thing she kept with her to try to find herself was her journal. It is not the kind of journal one would write one’s daily activities in but at the same time to her, that is exactly what it was. Her notebooks carry her innermost thoughts and her deepest feelings – not in the form of words however, but rather in the form of art.

Her early work contained paintings more along the lines of calligraphy as she, discovering an interest in art works, studied Arabic calligraphy as a hobby. Soon the calligraphy started becoming paintings – renditions of what she saw every day, things she felt, and her voice.

When she was around 42 was when she discovered her path leading towards art; after she started working with children, looking into their eyes, seeing their emotions, sharing those with them, and helping them through whatever they needed her for. She soon found that the connection she felt with other people could only be expressed by the movements of her hands upon a paper and she began to reflect these thoughts onto her notebooks.

When she travelled, she saw that she was always connected with the people around her; that she could somehow see their stories in their eyes and then re-narrate these stories in her book. She felt the same with the people of Sri Lanka when she returned again after her husband got the opportunity to be the Ambassador to Sri Lanka, representing the European Union. They were both very excited to be here and Fabienne recalls how welcome she felt when she first came in and saw all the smiling faces of the Sri Lankan people. However, she was in fact taking a big risk by coming as she was changing her entire lifestyle to be here.

She had to quit her job back in Brussels and simply come here with her husband to stay until his term is over and even her husband was worried she would not be comfortable with such a great alteration in her life. Nevertheless, she put all these doubts to rest when she as she said: “Found her place here.”

“Something is always happening in Sri Lanka,” she said. “Even if you step outside from the city and go to the forest, you will always hear things like animals moving, making noises.” It is this bustling liveliness of Sri Lanka which she so greatly appreciates. She believes that while the people make the country a safe place, there is always adventure knocking on your door and thrill is always just around the corner in this country. However, what she feels so intensely is the connection with the people.

She sees their stories when she meets them; it doesn’t even have to be a special planned trip. She just looks at people she sees on the go and finds their story through their manner and form. Then she transforms it into her art and expresses them. She doesn’t speak Sinhalese or Tamil but she can immediately understand what is going on inside the mind and heart of a person. This is how she felt when she drew with the women and adolescents at the Mental Hospital in Angoda recently.

She spoke about how connected she felt to the patients especially as the young ones reminded her of her students back in Brussels and the older women reminded her of her mother who passed away due to Alzheimer’s. She still keeps the paintings made by these people and she treasures them very deeply.
Similarly, she feels connected to all people although she does not know their stories fully. Hence, the title of her current exhibition at Saskia Fernando Studios Horton Place came about: “I don’t know but, I can remember.” This depicts how she can make recollections of the feelings of the people after having met them, regardless of her knowing their story. 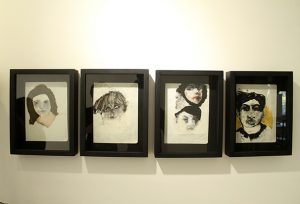 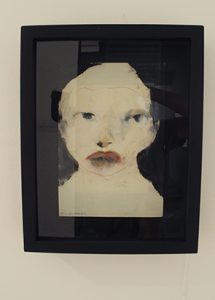 She finds that Sri Lanka is a place where she can find this connection quite easily, just as she does in countries like Nepal and Bangladesh, where she worked with many people suffering great misfortunes such as the Rohingya refugees or the poor but talented people she found in Kathmandu. While there are definite distinctions, she has also found ways to connect the people of these countries to which she has been as well.

However, for her, Sri Lanka is the best location where she can free her mind and let her thoughts flow into her hands and onto her canvas. Colombo, which is a city that is always moving, is the place where she would like to have her studio should she come to reside here permanently as she is hoping to with her husband.

It is not that she does not love her home, Brussels, which she has not in fact returned to in a long time, but rather it is that she has found an identity here in Sri Lanka. She says that if she did move to Sri Lanka permanently, she would certainly keep visiting her friends and family back home, but she would also paint a lot more feeling in the studio she is hoping to find in Colombo.

January 31, 2020 bythemorninglk No Comments
The Government of Sri Lanka, prompted by the TAMAP and funded by the European Union (EU) aims to systematically develop the agricultural industry of the country.