February 24, 2019 by themorninglk No Comments

It’s widely accepted that this would be a good race to make your 70.3 debut due to the flat and friendly course.

Participants may consist of teams or individuals and will start their triathlon with a 1.9 km swim in the warm, calm waters, then move on to bike a distance of 90 km, and then transition into the 21.1 km run.

IRONMAN 70.3 Colombo is organised by Pro-Am Serendib and sponsored by the Sri Lanka Tourism Promotion Bureau.

It appears that while local participation is certainly booming this year, there’s been a notable increase in women signing up.

In addition to a number of individual participants, IRONMAN 70.3 Colombo is seeing nine all-girl relay groups taking part this year;

We thought it would be fascinating to speak to some of these lovely ladies about living the life of a world-class athlete while balancing their everyday lives.

In our efforts to do so, we tried contacting all nine teams, and these are the ones that responded.

All three women are career women. Dharshi owns a shipping company with her husband, Anjula runs multiple companies, but heads an engineering company, and Chandrika is a finance manager who happens to be the only one taking a career break at this time, but despite which, she still has a busy schedule to maintain. 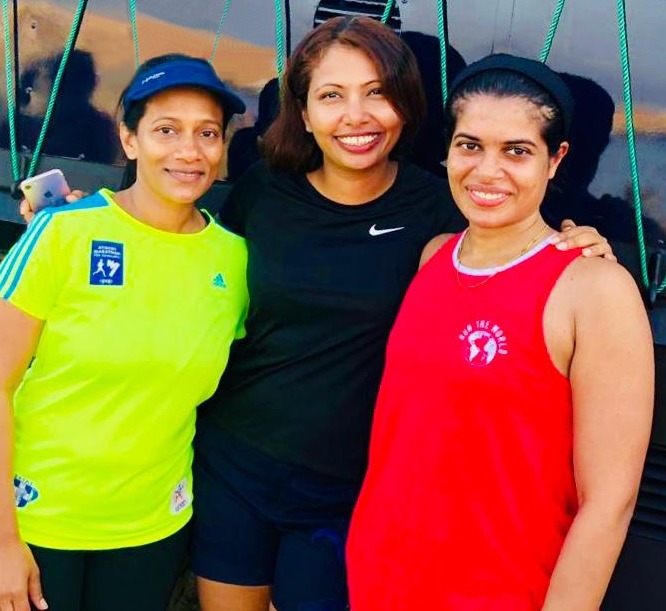 We spoke to the ladies about how the team came about and how their training has been. It was most inspiring to hear how they all sacrificed various things to be able to compete together.

Speaking about how training has been, Darshi – who actually participated in the Colombo Marathon last year – said: “We’re not really stressing about it, each one is supportive of the other’s event and we’re just taking it one step at a time.”

WowLife has a large number of participants competing this year, and they have an inbuilt support system where they run together, swim together, and cycle together.

On the subject of balancing work and family life, Anjula mentioned that taking care of two kids added to running a company has been quite the challenge, but according to her, training has been a stress reliever.

“I started training for endurance running right after my first baby, but this is my first time cycling. It’s sort of become a permanent addition now, the feeling of exertion, and it’s certainly been a balancing act but it’s been rewarding,” she said.

Chandrika, the swimmer of the group, took part in the competition the previous year, said that since she’s on a bit of a break it has certainly been easier than it would’ve been otherwise. She shared how she trains explaining that she prefers to train in the evening as that’s when she has time and the water is warmer as well. She added: “It’s been tough of course, we all have demanding lives and it’s been difficult to coordinate and meet up, but we’ve managed.”

All three ladies were united in saying that they never would’ve met such wonderful like-minded people if it hadn’t been for this commitment.

Ina Wehleit-Perera of Soul Foods will be running, Natasha Fonseka – a personal trainer at FIT.lk – will be cycling, and Harini Silva – a professional model – will be swimming.

The tree ladies, already leading fit lifestyles, each found it quite easy to transition from their regular everyday fitness training to training for IRONMAN.

Ina said that despite suffering a slight back injury a few weeks ago, she’s been back at it again, and it’s been going pretty well so far. “To break our own personal bests would be nice, but I think our main goal is to finish it together,” she said.

Natasha added: “We’re quite fresh going into this. It’s true that we’re aware of the required timings and the technical aspects, but we are mostly doing this in order to accomplish it as a group and to also enjoy ourselves in the process.”

When speaking of how they manage training and everyday life, all three women echoed the importance of time management.

Ina added that starting early is key, i.e. getting your gymming or training in early. And more importantly, they have made it their lifestyles to lead an energetic and fit life.

Harini, the swimmer of the group, stated that as a 21-year-old, being quite young herself, she’s really inspired to see so many women pushing themselves to achieve so many great things, providing that, “it’s because they are choosing to push themselves,” and she feels that IRONMAN is one of the ways she has chosen to push her own limits.

It’s also interesting to note that what sets WOW Energy apart from possibly any of the other contestants is that they are of the belief that the body does not need to stack carbs (carbohydrates) to draw energy when needed, and as such, they will be competing, and also conduct their training sessions, in a fasted state.

Running mostly on juices and fruit, they shared that this was “because we believe that energy is not only drawn from food”.

One of two all-Metho groups competing, the team boasts some formidable contestants.

To begin with, there’s the team captain, Nimnaz, a sprinter and currently the official second-fastest lady in the Asian region, having won the Asian Masters last year in Malaysia. 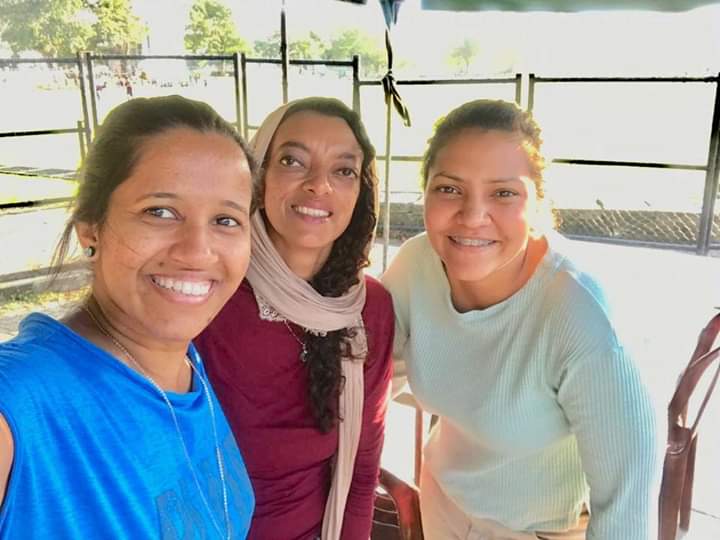 Nimnaz mentioned that the fastest and the winner in the Asian Masters was also a Lankan by the name of Sonali Wimalasena, who is also taking part in IRONMAN 70.3 with her husband in a relay team.

Despite being a runner however, this time around Nimnaz has chosen to push herself and is competing outside of her comfort zone.

A country manager at an IT firm, she has three kids, all under the age of 13, whom she swears are greatly independent, and, together with her supportive family, have really helped in her balancing act.

Also the netball coach at Methodist College, Nimnaz participated in IRONMAN last year as a runner.

Speaking of her switch to cycling, she said: “I suffered a heel injury and was asked not to run on hard surfaces, so I switched to the bike.

“Honestly, I travelled a lot for work and couldn’t train properly and so I panicked. That’s when I had Mithun from the Spinner Cycling Centre guide me. He told me that speed didn’t matter, he encouraged me to train, and when I did the full course I realised it’s really not your body, but your mind that gets you through.”

“Our strategy really is to ‘complete and not to compete’”, she said, explaining that it was about really enjoying it and encouraging each other to get through.

The team came together after Nimnaz posted about getting together a team on Facebook. Along came Muriel, one year her junior in school, who was also a sprinter. Lastly, after much difficulty, with many backing out due to fear of swimming in the sea, came the fearless Minoshala, who was ready for it. An excellent swimmer in school and with experience engaging in sea swim, Minoshala came in strong.

When speaking with Muriel, a senior integration consultant in the IT field, she said: “While I was an athlete in school, I’ve not trained this intensely in a while and to be honest, it has been extremely tough,” adding that despite it being intense, the pain was worth it referring them all as “sweet pains” as she’s is happy to be doing something she loves.

Muriel also added that she did in fact complete the course outside of the competition to mentally prepare, to know that she can do it.

Nimnaz and Sunara, a member of the other Methodist team Green Brigade, were recently asked to speak at the general assembly in school and Nimnaz shared that it was a humbling experience, and one that she believed truly inspired some young girls.

This is the second all-Metho relay team, which consists of Siroshni Illangage – runner, Sunara Ranasinghe – cyclist, and Dharshana Senanayake – swimmer. 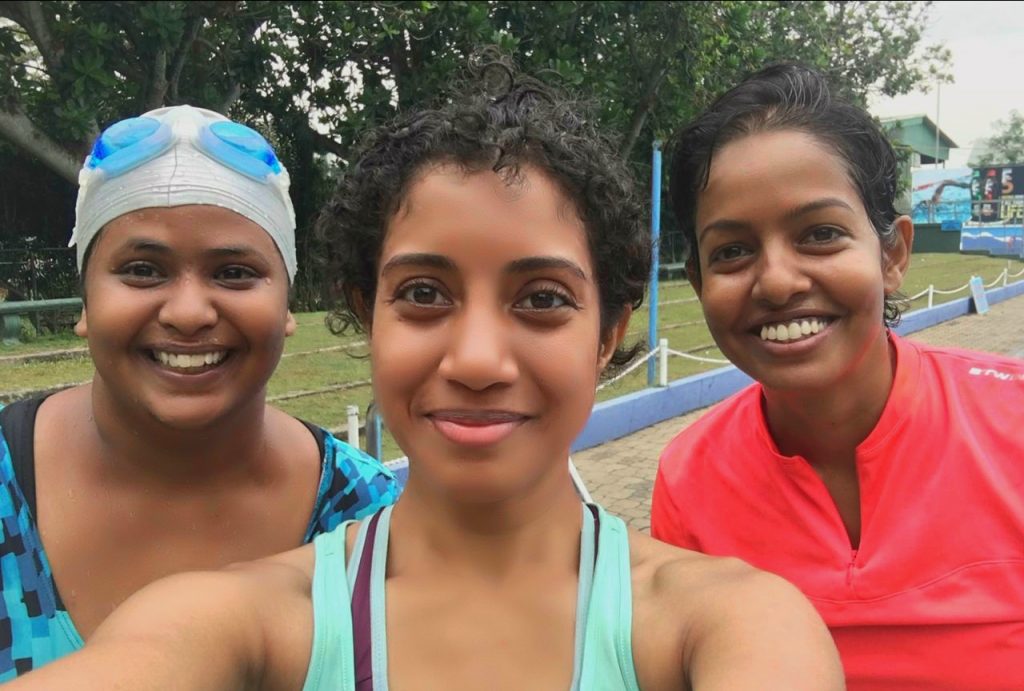 A lawyer by profession, Siroshi has pushed herself to train in endurance running. In sharing her experience in preparing for the competition, she said: “It’s been genuinely tough. Being busy 24-hours, seven days a week, at a nine-to-five job, waking up early – it’s all been exhausting, but it’s been absolutely worth it.” She also added: “It’s great to push your limits, not just physically, but mentally as well.”

In sharing her experience training, Siroshi adamantly stressed on the street harassment women are subject to, particularly when in workout gear, perhaps running down the road or cycling, as she’s faced a lot herself in this context.

Heavily disheartened by her experiences, Siroshi said: “I’ve had people who care about me tell me to not wear shorts for my safety, and while they’re coming from a place of love, I really shouldn’t have to do that to protect myself.”

She added: “Shorts are what I wear as they are airy and far more suitable for running, but the amount of cat-calling and dangerous swerving of vehicles in my way has been ridiculous.”

We spoke to Shanika – a latecomer to the team – who shared that she was inspired after being a spectator last year, and while she hadn’t planned on doing any different this year, she received a call from a friend to fill a slot that was vacated as a result of a team member suffering an injury.
According to Shanika, the Trifectas have met just once.

A former employee of a migration law firm, she has now retired and hadn’t found it too difficult to find time to train. She said: “I enjoy being a road cyclist. I’ve done a bit of it for fitness and health purposes.” When questioning her about the race, she said: “I don’t know about speed, but I am mentally ready.”

She shared how she got into cycling when her son took part in Round The Pearl, and that since then, she too had taken part; she believes this experience would help her complete her leg of the competition.

July 20, 2021 byNews Admin No Comments
Friday (16) saw a supremely unfortunate, but sadly not uncommon, event come to light. The death of an animal due to a jaw bomb, or, as they are colloquially known, hakka patas. Reported on social medi