February 12, 2020 by themorninglk No Comments


On Friday 31 January, Barefoot Gallery Café hosted a concert featuring Isheeta Chakrvarty, an Indian artist known for her own, unique brand of Hindustani classical music, performed in harmony with jazz alongside folk and pop music.

The affair proved to be an immense success as everyone in attendance thoroughly enjoyed themselves, having been serenaded by the soothing sounds of fusion tunes inimitably performed by Isheeta, whom we caught up with to discuss her style of music – most unusual and absolutely delightful.

We were most intrigued by the saree clad songstress who sang poppy jazzy beats mixed with traditional Indian raga music. Isheeta, who had landed in Sri Lanka just the day prior to the concert, sat down with us for a chat and shared her musical journey as well as her personal journey of acceptance in pursuing what she loves.

Having grown up in Kolkata, India, Isheeta shared that she received her formal education in language, having obtained her MA in Literature. However, music has been interwoven into her existence as she comes from “a musical family – not professional musicians, but lovers of music”. She had been singing for as long as she can remember and had started training in music at the tender age of 10, with her primary gurus being Kaushiki Chakraborty and Ajoy Chakrabarty. She said music is a constant learning process and her education has not ceased as she is currently under the tutelage of a classical musician in Pune.

However, despite her training as a classical musician, Isheeta shared that her own brand of music came about the time she so fortunately met the legendary Carlton Kitto, a renowned bebop jazz guitarist from Kolkata, when he was looking for a singer for his jazz band.

“At this point, I knew nothing about Jazz, but it was on the job that I trained and I learned a lot under him,” said Isheeta, also sharing that “around this time is when I worked on my first fusion project with electronic music and classical music, and this is when the seed for what I wanted to do was germinating”. Isheeta had then moved to Bombay where she had met Louis Banks, who is referred to as the Godfather of Indian Jazz. “He’s a maestro, and I feel lucky to have met him and sung for him,” she added. 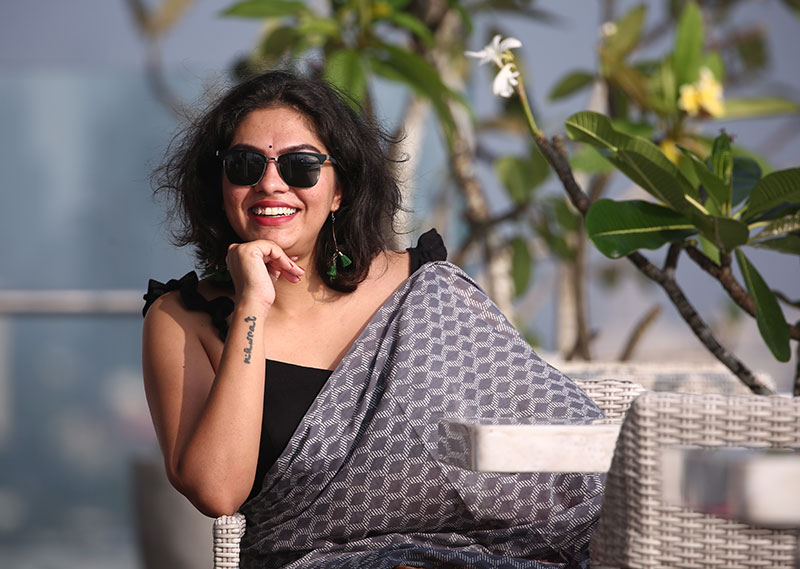 Considering how Isheeta is both a lover of Jazz and classical music, and therefore is knowledgeable in both areas, we posed the question of musical authenticity and retaining the essence of an original composition. Isheeta very thoughtfully shared that fusion indeed adopts its own identity, becoming its own entity.

“The concept of fusion has been around forever, and different artists understand it differently. In India, of course, we have that tradition of classical music, but there are no boundaries anymore; there are artists always trying to put this and that together. And as an artist, I think there are no boxes anymore.”

We then came to our next question of whether there are some things that should not be touched – those considered too sacred to be altered in any way. To this she said: “You may look at a traditional composition and there will be people who say don’t touch it because it is fully formed in itself; the composers and musicians back then, when they created it, made it so that it is a fully formed entity. But while I completely understand the importance of maintaining the sanctity of that, as a modern-day musician, we should have the freedom to push a little bit.”

Isheeta shared an example from her set list. “A tune like Jagadodharana is a beautiful composition by Purandara Dasa of the Carnatic tradition and is a song I love, and I play a version that doesn’t include the Carnatic classical violin – it’s just piano, drums, and bass,” she said.

There are those who would always be critical. However, she said the question may be “how do you maintain the essence. And all I can say is try to be mindful when you push, but of course not with too much caution”.

Both jazz and Indian classical are similar styles of music which are yet totally different; while both are types of improvisational music, the Indian system carries the concept of ragas, which are scales, whereas jazz incorporates harmonies and therefore has chords which Indian music does not have. However, every chord opens up different scales and so there is a technical aspect where you can put the two together, shared Isheeta.

As for her own personal journey, she said: “Because I have trained in Hindustani classical music and I also have a tendency to pursue western music – especially when you learn in English medium and your instructions are in English – this was a natural step for me.” However, she shared that “growing up, I never let go of my roots, and what I have done here is to find a way to bridge my two loves, because jazz is something I fell in love with. People ask me all the time ‘which would you choose?’, and I would hate to have to choose”.

Nevertheless, she did say that “Indian music is home” and that is where her roots are; she believes it is important to strengthen the roots in order for the tree to grow higher and really allow it to branch out. “I am an Indian, and I grew up in that culture. It is very familiar to me – I understand it, the food, the spiritual aspect…I cannot dissociate myself from that, not in a dogmatic way but in a way that allows space for other influences to come in.”

Speaking about being invited to perform for the NTT, Isheeta said she is incredibly honoured to have been invited “purely on the merit of my content and not because I knew certain people”, cautiously adding that “I don’t know if that is a controversial thing to say right now, but this is the way of the world and I just feel validated”.

She said she is grateful to have had the opportunity to perform in Colombo, especially with this current outfit with whom she is performing – Raguraman Subramaniam on bass, Niranjan Joshi on keys, and Yadhunandan Nagaraj on drums.
Finally, sharing her thoughts on the NTT, which is a dedicated entity for peace-building and promoting unity, she said she is immeasurably appreciative of the opportunity she received to play a role and do her part in some small way in maintaining such relationships and fostering unity.

This is Sri Lanka – show us your Sri Lanka

January 29, 2021 byNews Admin No Comments
Shehan Tahir and Shenelle Rodrigo are Lankan travel content creators best known for their travel series “This is Sri Lanka”, which has since evolved into a larger movement where the duo promote...

April 27, 2021 byNews Admin No Comments
Colombo’s art scene saw a vibrant new addition on 24 April with the opening of the Colombo Art Gallery on Gandhara Street.