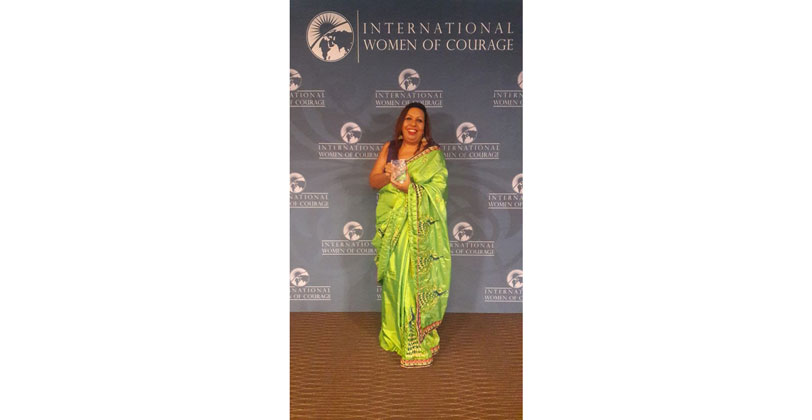 The International Women of Courage (IWOC) Award is an annual recognition of women around the globe who have demonstrated exceptional courage and leadership in advocating for peace, justice, human rights, gender equality, and women’s empowerment – often at great personal risk and sacrifice.

It is awarded by the American Secretary Of State at the United States Department of State and it is an honour reserved for just 10 extraordinary women from around the globe. On 7 March, Secretary Mike Pompeo awarded Sri Lanka’s Attorney-at-Law Marini De Livera this prestigious accolade.

The former National Child Protection Authority Chairperson, De Livera is Sisters at Law Founder and Chairperson as well, where she serves as a pro bono lawyer for women and child victims of crime and promotes alternative care for children trapped in orphanages.

The Sunday Morning Brunch had a talk with De Livera – currently in America, following the reception of her award – and she shared with us what the future holds for the sole crusader whose tireless efforts have now been recognised on a global scale and the significance such recognition entails.

Q. How do you feel being an IWOC recipient and what does this mean for your continued efforts as a pro bono lawyer, activist, and advocate back home in Sri Lanka?

It was wonderful to be recognised and appreciated. I feel most fortunate and I have to say, this award is not for me, but for every woman in Sri Lanka.

As for the significance of such an award, I have visited three states here in America: Los Angeles (LA), Florida, and Washington. I have been afforded the opportunity here to build a support network, inclusive of the other nine recipients – so many have come forward to partner with me and back home, I believe this is important to create awareness of the work that needs to be done.

Q. You have been honoured for your pro bono work with Sisters at Law, defence of children in orphanages, and using the arts to improve legal literacy. In a country where literacy rates are equivalent to that of highly developed countries, why do you think legal literacy is so low?

Most Sri Lankans are not aware of their fundamental rights, therefore they cannot access justice…many of them resign to accept their “fate” saying it’s their karma to suffer. But in actuality, there are mechanisms in place, but they are useless unless we teach it in a way they can absorb it.

There are lots of wonderful laws available and they are all set out in law books; the National Child Protection Authority (NCPA) has a wonderful Act that provides for the protection and promotion of child rights and the prevention of abuse, and this is not only dealing with the perpetrator like we’ve all been led to assume.

When I teach law in rural areas, I use hand painted posters and incorporate characters and interactive methods. I don’t need classrooms or seminar halls – all I need is an audience. I have my own street theatre group that travels around the country performing plays related to human rights issues, because it is vital and integral that we create human rights awareness.

Q. How were you exposed to the abuse children undergo in orphanages?

As the NCPA Chairperson, I had the power to insist on visiting orphanages to check up on the welfare of children at risk, and I visited a number of such places and often conducted art programmes which created awareness of their rights. Following these programmes, letters just piled up about various abuses these children underwent – forced labour, intense physical and verbal abuse, and there was even an instance where I suspected that teenage girls were being trafficked, but my investigation was cut short.

Q. How do you suggest that such abuse be eliminated, and is there a possible alternative for the care of children without fit parents?

In most developed countries, there are no orphanages, there’s alternative care or family care. The Australian Government actually has made a commitment to train our judges in matters involving children requiring alternative care, to send children to orphanages as a last resort.

Very recently, just before I left for America, there was a court case where a child was dumped by the birth mother at only two days old and this child was brought up by a foster mother for three years and the birth mother has come forward demanding the child back. Usually in Sri Lanka, the judge would send the child to an orphanage, but it was declared that a fit person who is capable of providing care for the child may be allowed to provide alternative care. This was a real triumph where Sri Lankan courts recognised the concept of foster care for the very first time.

Q. Your work with Sisters at Law is a fantastic initiative and now it has received the recognition it deserves. How did you manage to keep a pro bono effort afloat amidst the highly competitive legal culture in the country?

Sisters at Law and Marini De Livera Associates is a hybrid. I did not want to create a law firm – they are all rather elitist, colonial, and patriarchal.

There is a serious lack of pro bono culture in Sri Lanka, and Sisters at Law was created to provide aid for those who desperately need it. I got out of the NCPA and was upset for two, three hours and then I realised that I don’t need a government position to make a change. All you need is dedication and passion to give life to make the change you envisioned.

One of the greatest things that have come out of this recognition is that I am able to continue my pro bono work, as up to now, I have been unable to pay my employees. It has been entirely volunteer-run and now we have the ability to make a bigger impact.

Q. If you could leave us with one final remark, for anyone who wishes to make a change but is looking for a way to do it, what would you say?

If you want to see a change, then you have to forge ahead without complaining or looking at the obstacles.
In Sri Lanka, with our younger generation, I see a lack of volunteerism. Here in LA and Florida, I met with so many young students who are willing to dedicate their time and energy for the idea of creating a better place. There is self-centeredness and a lack of altruism and empathy in our youth back home.

We must focus our efforts in bettering the conditions for children because they are the life and blood of our society. A mistreated child could grow up to be an angry adult who is dangerous to society and a burden and so, it is necessary to encourage mechanisms that support child welfare.

February 28, 2019 byJennifer Anandanayagam No Comments
Leo Art, an artists-in-residence programme by Leo Burnett Sri Lanka, recently curated the exhibition at the Lionel Wendt Festival of Art which took place from 23 to 24 February

Live music in pandemic times: Cold Sweat tells us how it is

July 15, 2020 byJennifer Anandanayagam No Comments
With a potential second wave looming, The Morning Brunch spoke to Shavindra Tissera of homegrown band Cold Sweat about how they as a musical act have fared during these difficult and uncertain times.