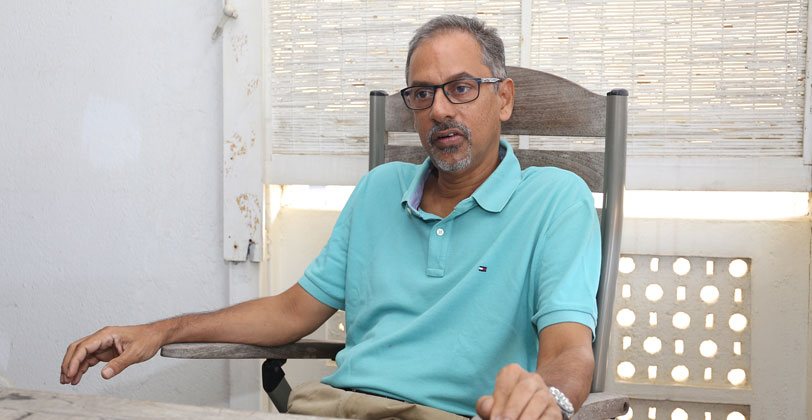 Rukshan Jayawardene on what Sri Lanka should really be concerned about…

On this World Wildlife Day (3 March) – dedicated to celebrating and raising awareness of the world’s wild fauna and flora – we spoke with the former President of the Wildlife and Nature Protection Society (WNPS), current committee member, and Director at Environmental Foundation Ltd. (EFL) Rukshan Jayawardene regarding Sri Lanka’s present situation with regards to its wildlife.

According to Jayawardene, the island’s biggest concern with regards to wildlife and one that’s shrouded in misconceptions and misinformation is the alarming rate of habitat loss.

Habitat loss, he said, poses the greatest threat to species. And as the world’s forests, lakes, and other habitats continue to disappear to make way for agriculture, housing, roads, and the other hallmarks of industrial development, there is a nearly irreversible loss of wildlife. Without a strong plan to protect and create terrestrial and marine protected areas, important ecological habitats will continue to be lost, observed Jayawardene.

He furthered that when a habitat is destroyed, it has a reduced carrying capacity, which leads to the populations of plants, animals, and other organisms that occupied the habitat to decline, making extinction more likely.

Animals are losing their homes because of the growing needs of humans. Habitat loss is identified as the main threat to 85% of all species described in the IUCN’s Red List (species officially classified as threatened and endangered by the International Union for Conservation of Nature).

Jayawardene mentioned that while habitat loss is a lesser-identified threat in the loss of wildlife, in Sri Lanka specifically there’s a plethora of endangered wildlife that are yet completely out of the radar.

The large mammals that are gravely affected by habitat loss are elephants, leopards, and bears, he stated, adding: “All the iconic familiar animals.”

Most of these animals don’t adapt well to man-modified environments, so when they try to live on our crops, they invariably come into direct conflict with humans. These animals lose out in two major ways: First, they lose their homes and then when they come into direct conflict with humans, it often results in the death of the animal – only in the case of elephants do we actually see deaths on the human side as well.

Leaving elephants aside – as they are in hyperfocus at any given moment within the country – let’s touch on a few lesser known animals that are in serious trouble due to the loss of forest cover and the increased conversion of natural habitat into agricultural land, as revealed by Jayawardene.

“Leopards are masters at living next to humans and human habitation undetected. However, when their food supply runs out, when we open up their lands and kill their prey, they are left with no choice but to come into our lands and home gardens and feed on our farm animals,” said Jayawardene.

He then stated that this directly results in conflict with the people affected as they suffer economic loss and also feel threatened as a large predator invades their space. According to Jayawardene, more leopards die as a result of direct human conflict; getting attacked by farmers, being poached for their skin, or other illegal black market trades.

The sophisticated black market for killing a large cat for commercial gain is still small, he noted, adding that thankfully, this was not a major problem in Sri Lanka. He explained that, at worst, we’re getting sucked into a peripheral marketplace, providing what our neighbours are poaching.
He also added that one important factor to note was that leopards are obligate carnivores – they cannot eat vegetation. As they have to eat meat to survive, while their animal food becomes scarce at the expense of intensive harvesting, they are gravely affected.

The main threat to the sloth bear is habitat loss, said Jayawardene, but more so the disturbance to the pristine wilderness that they live in, which hardly exists today.

Even as the forests stand, bears cannot be found as humans may be intervening either to collect firewood or honey. Minimal disturbances such as this affect them, although there really isn’t enough research to understand how this happens, explained Jayawardene. “The bear can be considered an indicator species for the health of an ecosystem as it is very sensitive to disturbances.”

However, from the little we know, he said that we can conclude that one major factor that affects the sloth bear is firewood collection. Fifty percent of their diet consists of termites, and as the deadwood that falls on the forest floor is where termites come to for food, when we collect firewood, the termite population drops, causing the bear population to also drop.

“This is the world’s most trafficked animal and its global demand contributes to making it rarer in our forests,” he noted. Recent news stories also featured this issue, where the animal is subject to cruel treatment for its flesh, its scales as a Chinese delicacy, and a medicinal ingredient. The trafficking of the pangolin is quite prevalent, despite a global ban implemented by CITES on the trafficking of its parts. Enforcement efforts are critical in tackling the demand that drives black market trade, said Jayawardene.

According to Jayawardene, Sri Lanka’s main concern should be its endemic species, which are largely ignored in favour of the large mammals that predominantly draw tourists. He said that many endemics go unnoticed and remain unprotected largely due to being “unspectacular”.

However, the endemics are what need protection, he stressed, particularly for ecotourism, as our main draw remains to be the species that are unique to us. Tourists will not visit Sri Lanka to see the same species they can in India.

Point endemics are often small and live in very restricted, difficult-to-access areas made up of only a few square kilometres of land – like wetlands, montane forests, and lowland rainforests. Frogs, lizards, and snakes fall into the category of point endemics and all of them are under serious threat due to habitat loss.

Their already small habitat has shrunk to a near-nonexistent percentage, he said, and wet zone forests are down to 3% from its original extent within which all these endemics live. These endemic species and primordial forests are a huge economic draw and not protecting these will serves as a considerable economic loss.

“These endemics are an important draw for ecotourism, in that high-spending, low-impact tourists will pay a lot of money to see these wilderness areas and the endemics living in it.”

A classic example is the blue magpie, an endemic bird unique to any other magpie, which is also known as the true magpie, different to the “polkichcha” which is actually a robin. This magpie lives in lowland and montane wet forests; those small patches of forests in the South.

Jayawardene noted that this blue magpie’s natural enemy is the common koel bird, i.e. the koha, which are parasitic birds that eradicate the magpie’s nest.

They have become an unnatural, grave threat to the magpie as the koel birds are forced into seeking habitation in the marginal areas of forests due to human encroachment. “They do not usually wander into the thickest of forests, but now they are forced to wander in and pillage a magpies nest.”

Sri Lanka is the host country for CITES CoP18 in May, 2019, a gathering of the 190 signatory countries, where some attendees will submit species-listing proposals.

Jayawardene noted that one of Sri Lanka’s main goals is to upgrade the endemic lizard’s protective status.

However, he pointed out that our bid to do that would be meet roadblocks as European countries were reluctant to extend their support to this more serious problem of protection as it may threaten the continuation of their trade in these endemic species.

Unfortunately, this is one such situation that is not too widely discussed, said Jayawardene, stressing that if we were to lose these species, the world loses them as well.

“These animals are not seen as significant, and are thereby often forgotten. In their own way, they are quite spectacular, but their specific ecosystems and narrow requirements mean that they cannot survive outside of natural forest cover.”

All the freshwater crustaceans, according to Jayawardene, are endemic and endangered.

These crustaceans live in small streams and river systems that come from the mountains which flow through the catchments of endemic wet forests now under threat either from deforestation or attendant soil erosion. As such, the streams become turbid then muddy, an immediate threat as some of these animals which can only survive in clear water. Some are even exposed to a dose of chemicals from the tea country.

Jayawardene explained that frogs are extremely sensitive to chemicals in that they are immediately affected as they have semipermeable skins.
Habitat loss is probably the greatest threat to the variety of life on this planet today, he said.

Out of the Sustainable Development Goals (SGD) set, Goal 15 focuses on halting biodiversity loss and the adverse effects it poses. However, Sri Lanka’s strategy remains reactive than proactive.

World Wildlife Day is an opportunity to celebrate the many beautiful and varied forms of wild fauna and flora and to raise awareness of the multitude of benefits conservation provides to people. The day also reminds us of the urgent need to step up the fight against wildlife crime and human-induced reduction of species through international trade to ensure that it does not threaten the survival of the earth’s wildlife.

Making mistakes and learning from them

March 22, 2021 byNews Admin No Comments
In honour of International Women’s Day, WEConnect International, a non-profit that helps women-owned businesses compete in the global marketplace by connecting them with large organisations that can b